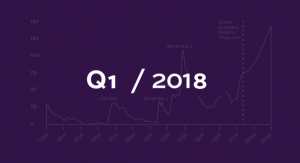 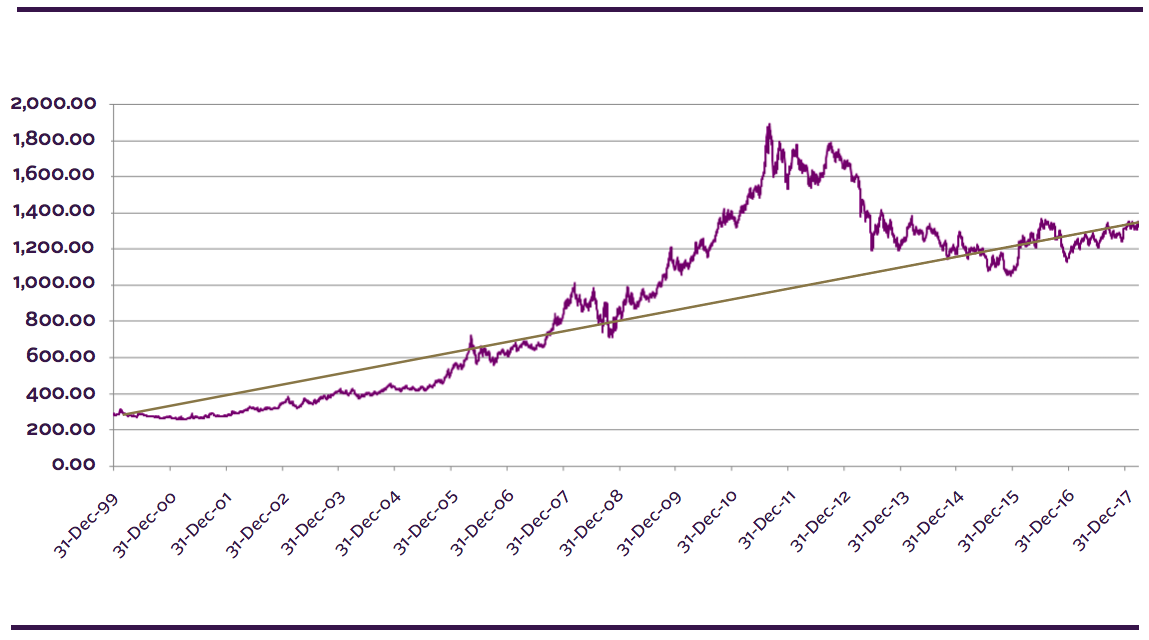 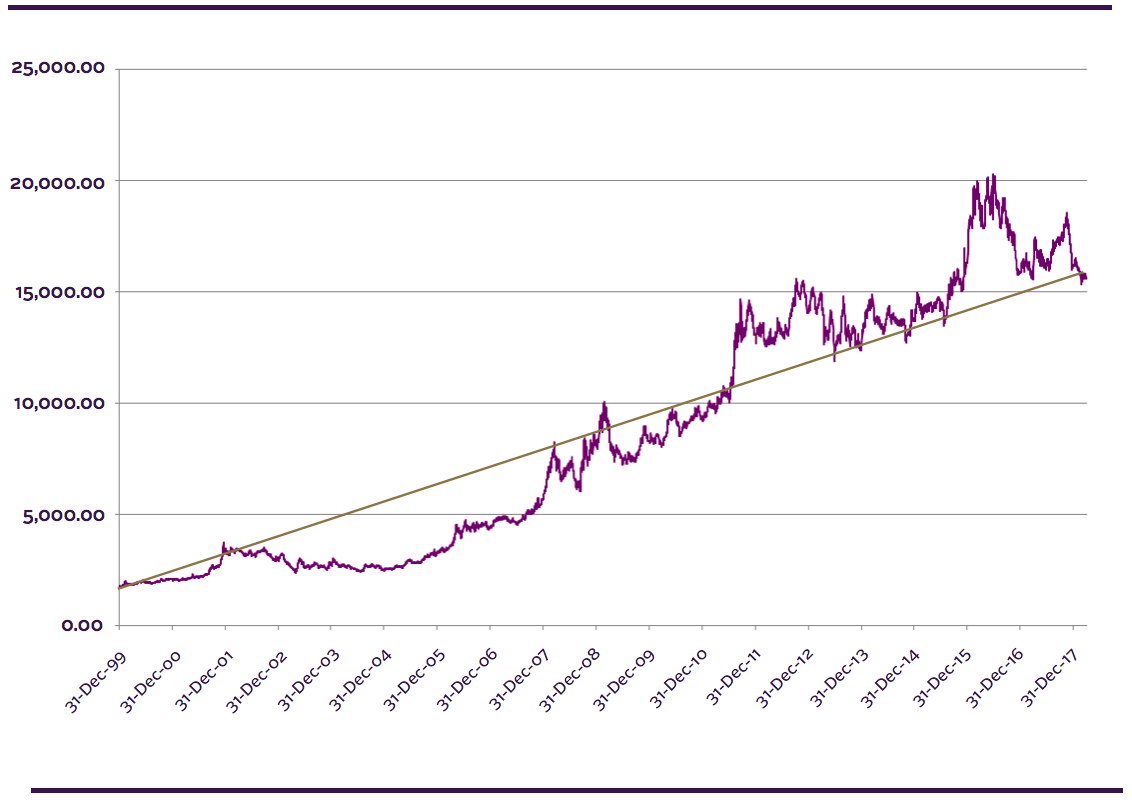 During the quarter, on three occasions gold rose from $1,310 to $1,350 and then fell back again. In Rand the picture was quite different due to Rand strength. Here gold began the quarter at R16,218 and did a steep decline as the Rand benefitted from the Ramaphosa-dividend. Over the course of the last 12 months the story was similar. In Dollar gold was up a very respectable 6.4% but in Rand gold was down -2.6% due to Rand strength based on Mr Zuma’s exit and Mrs Zuma’s election defeat in the ruling party.

Any gold performance numbers that commence in the period mid-2010 to mid-2013 are going to look awful as those starting points will be in the madness of the gold price spike during the height of Global Financial Crisis woes and the toxic remedy called quantitative easing. Looking beyond that starting period we observe that gold has returned an annualized 8.7% in Dollar and an annualized 12.6% in Rand for the 18¼ years of this century. These are strong performance numbers.

In May last year we put out a note entitled “End days of President Trump?” In this note we spoke unfavourably of President Trump and predicted that the Special Counsel investigation would lead to many indictments and criminal charges. We also stated that we expected obstruction of justice charges against the President and his associates. We also said: “We expect a period of immense turmoil as Trump rapidly loses his public political-capital and support from his own party in Congress. We expect him to become ever-more combative as he goes down on his sinking ship. We expect that he will resign or be forced out of office within two years. We are thinking about a President Mike Pence…”

For anyone with an interest in the 2½ million years history of humans, and the 200,000 years history of our species of human being i.e. Homo sapiens, we highly recommend the recent book of Israeli history academic Yuval Noah Harari called simply Sapiens.

Harari devotes many pages of his book to the subjects of money and gold, and while he is no economist or monetarist, his writings are, by our reckoning, spot on (with the exception of one little error that we picked up). If you don’t have the time or inclination to read Harari’s exceptional book, permit us to bring to your attention what we regard as Harari’s four most important points:

It is profoundly important that the head of a nation should be trustworthy – more so, the leader of the most important nation on the only planet habitable to mankind. Where a society loses trust the quality of governing deteriorates and society, the economy and the currency pay the price. In the case of the United States of America, the world pays the price.

We are in an era where power is shifting from west to east – from America and Europe to Asia. For 20 years this force has been largely economic but since assuming office, President Trump has been accelerating the power shift politically, monetarily and sociologically.

How does an individual prove credibility? We would argue that for a leader the most important aspects would be:

Reflecting on the current president of the USA: Firstly, he is an inveterate liar. Secondly, he made massive campaign promises and has proceeded to do the opposite. Thirdly, he blatantly lies about what he has done. These observations are not hearsay, they are completely provable, and we are going to look at one or two of his deceits that have a profound impact on US politics, US law, the US economy and the US Dollar….and therefore gold.

It is no exaggeration to say that the credibility of US President Donald Trump is rapidly eroding and that as a consequence, trust in the United States of America and its status as upstanding leader of the world, is dissolving fast.

Update on the Special Counsel

The Special Counsel has thus far:

Throughout his campaign and for many years preceding, Donald Trump forcefully advocated two big-ticket items:

Tax reform means re-jigging of taxation and expenditure so as to more equitably spread the tax burden and to recognize new spending priorities without expanding the budget deficit.

In late-December Trump signed his much-heralded tax reform bill into law. Except that it was most definitely not tax reform. It was tax cuts (The only credit for honesty here would be for calling the Act “Tax Cuts and Jobs Act”). And 80% of the benefits were going to the richest of Americans and to corporations. Trump and his family became huge beneficiaries of Trump’s own legislation, while the middle-class and the poor had been artfully deceived.

Tax reform had been intended last year, but that plan was scrapped when Trump and his Republican Party were unsuccessful with their first stage. Following President Reagan’s immortalized guidance, the new president had tried first to cut expenses, with the intention to then cut taxes, and in this way produce tax reform. But Trump and his party failed to repeal Obama Care as they had promised. [Side note: they had promised the working class that Obama Care would be replaced with something much better. That had been a bald lie from the start. It was always going to be an elimination of entitlements, starting with Obama Care, and then a cut of taxation for the rich.]

With the Obama Care Repeal a failure, Trump moved on to the real mission – to cut taxes for the rich. Amongst other things, he has eliminated estate duty ensuring that his heirs will be better off by hundreds of millions or billions of Dollars.

The great problem with Trump’s tax cuts is that they have coincided with no reduction in expenditure and in fact a massive ballooning in expenditure. In March President Trump signed an Omnibus Spending Bill that includes massive increases in domestic and military spending. New law ensures not only a voiding of the ‘Reduction of the Public Debt’ promise, but the opposite – a huge ballooning of the Public Debt.

Trump is giving America the opposite of what he promised.

The Congressional Budget Office (“CBO”) is a United States government agency that provides budget and economic information and guidance. It is non-political. See www.cbo.org

The CBO recently produced its projections for the next ten years to 2028. The Office projects the effects of Trump’s policies to explode the US Federal Budget Deficit to in excess of $1 trillion in two years’ time. Whilst this trillion-dollars-deficit-in-a-year occurred during the Obama presidency, that was at a time of economic distress, very high unemployment and interest rates at historic lows. At the current time the economy is on the repair path, unemployment is low and interest rates are climbing.

Table 4: US Deficit and Debt Projections

Up to 1971 the US Dollar was backed by gold and all currencies of the world, since 1944 (Bretton Woods Accord), were referenced to, and backed by, the Dollar. The world is now 47 years into this great experiment where the US Dollar and all currencies of the world are backed by nothing at all. For a visual clue as to what zero-constraints on Dollar supply has meant for the US Public Debt relative to the size of the US economy, draw a line from 1971 to the present (and beyond) on the chart below.

Figure 3: Federal Debt Held By the Public (% of GDP)

The picture into the future is extreme and according to Alan Greenspan, past-Governor of the US Federal Reserve: “the effect will be felt sooner rather than later”. According to Trump and his Republican Party the great solution will be for the economy to grow its way out of problems. Again, according to Greenspan: “We can’t. Not now. Output per hour must grow at 2% per annum but its 0.5%”. Greenspan does not see a remedy. We do.

Entitlements are growing at 9% per annum. Entitlements are eating into domestic savings and the economy. Money supply is accelerating, wages are rising, and both are leading to inflation. As we have been saying for a decade or more: the future spells Stagflation.

The future looks to us like rising inflation as labour markets tighten and the Fed hikes rates. This means a weaker Dollar. A weaker Dollar means a higher gold price. And this means one should have gold in one’s portfolio.