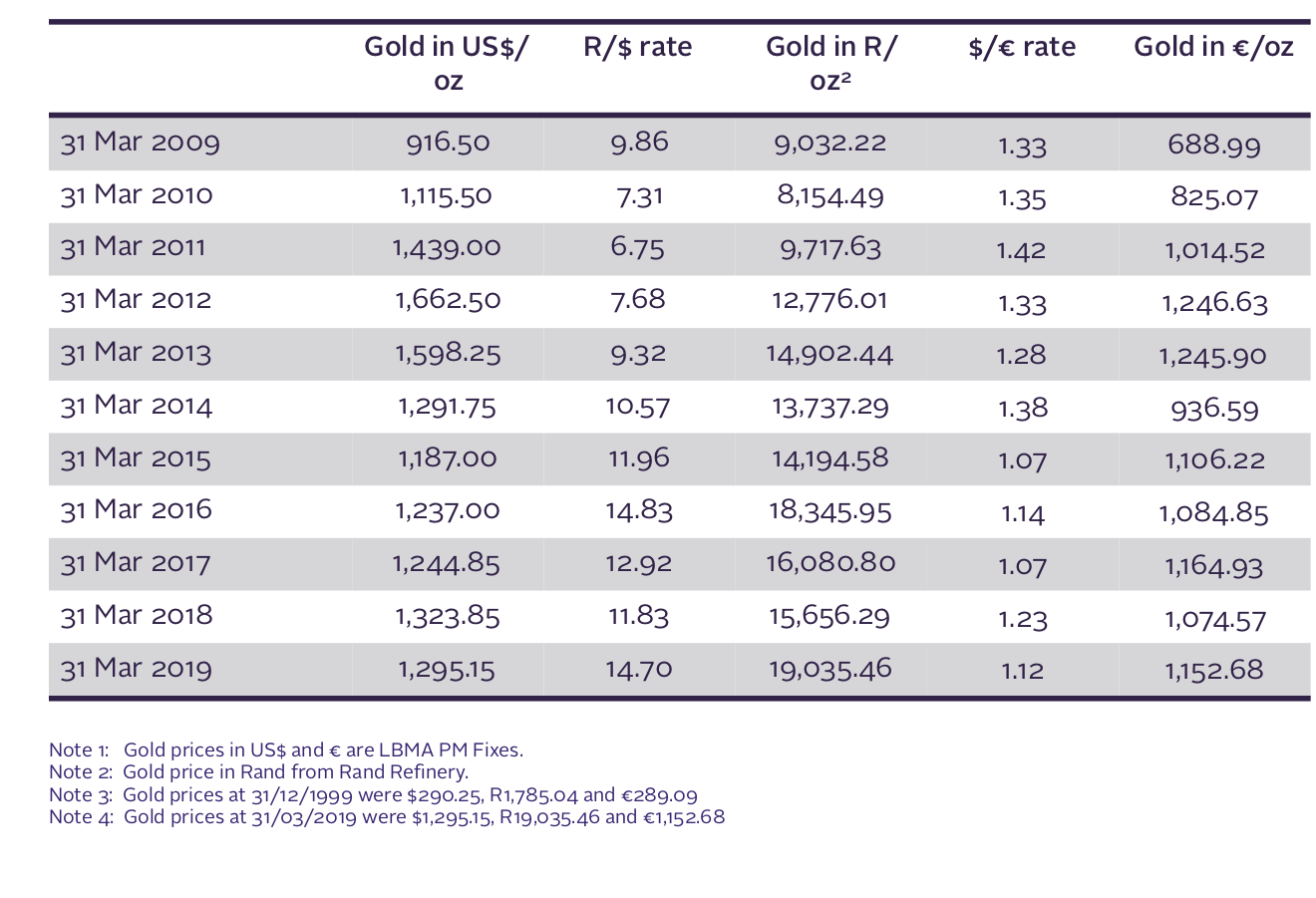 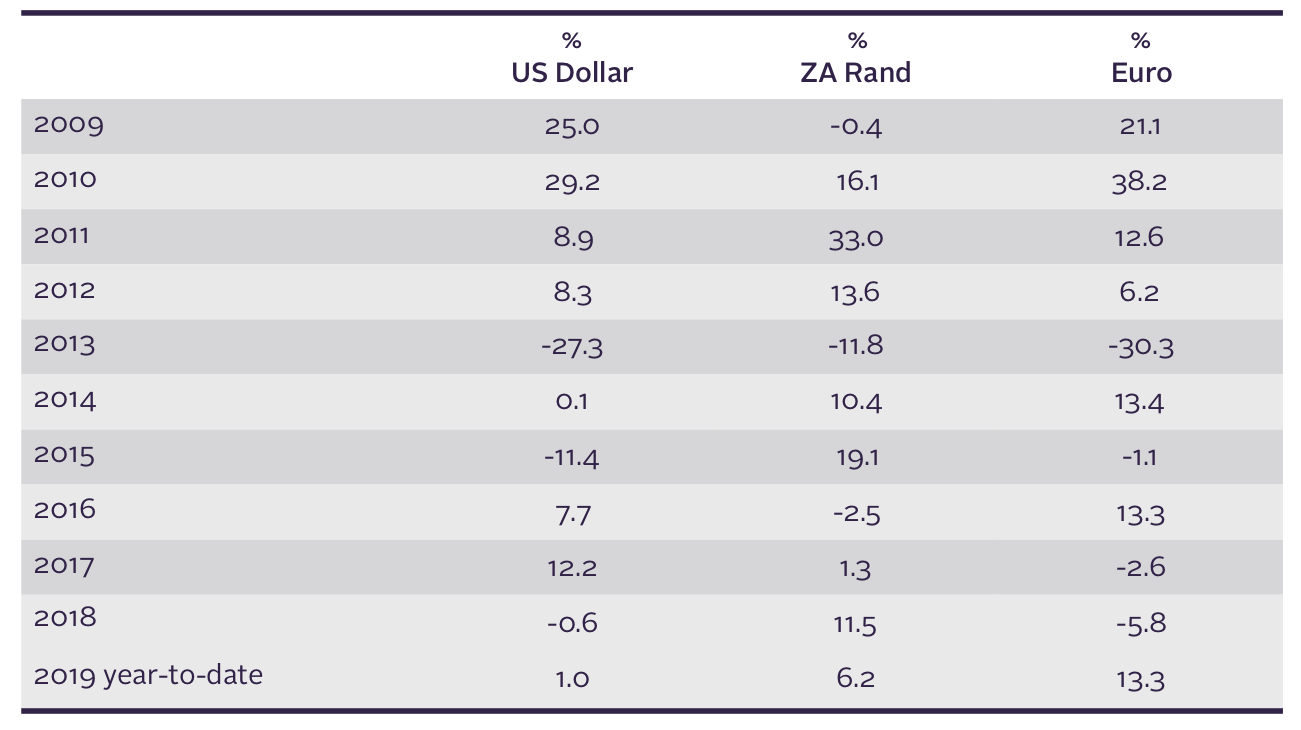 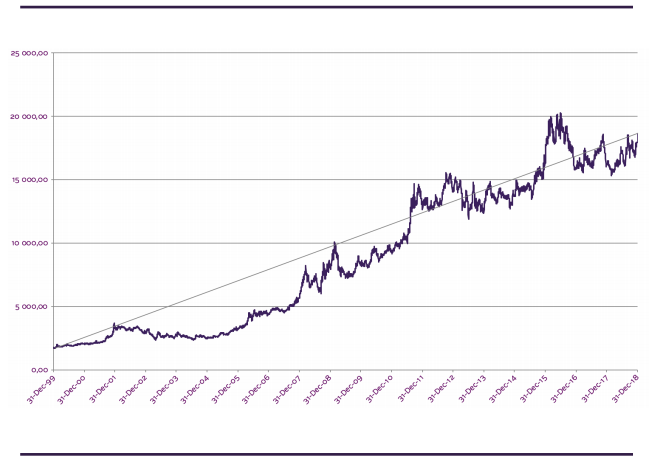 In US Dollar the gold price did a bowl-shaped curve over the last 12 months. For the last six months the rally was strong, up more than $100 per ounce, but the preceding six months were weak, down more than $100 per ounce. Overall, gold in Dollar was flat for the year. In Rand the gold price rally was incredibly strong over the last 12 months. Gold went from R15,656 to R19,035. This translates into performance of more than 21%! Of course this means the Rand lost this amount of value against the US Dollar, since gold in Dollar was flat. The South African currency has lost the short-lived Ramaphosa relief rally and now faces hard, cold realities. Both in Dollar and Rand the price charts look enticing.

In May 2017 we put out a note entitled “End days of President Trump?” In this note we said: “So what are the likely outcomes?”

“We are sure that the Special Counsel investigation will reveal many crimes. Already there is much prima facie evidence of crimes committed by Trump Campaign Chairman Paul Manafort and Trump’s National Security Advisor General Michael Flynn. We anticipate unlawful Russian business between Trump, Commerce Secretary Ross and others. The circumstantial evidence is substantial and the attempted cover-ups are even more telling. We expect an obstruction of justice criminal indictment against Trump and/ or associates.”

On 22 March 2019 the Special Counsel delivered his report to the US Attorney General, concluding the investigation into links and/or coordination between individuals of the Trump Campaign and Russia. The Special Counsel exposed many crimes in the 22-month course of his investigation. Trump’s Campaign Chairman has been imprisoned for many years. Trump’s National Security Advisor has pleaded guilty to a crime and awaits sentencing. Trump’s personal lawyer has been convicted of crimes and is heading to prison. Trump’s old friend and advisor, Roger Stone, awaits trial. The list goes on.

The Special Counsel proved that the Russians played a role in Hilary Clinton’s defeat and Trump’s victory in the 2016 election, and has indicted many Russian individuals and Russian companies for their crimes. But it is no surprise to us that conspiracy charges have not been brought against the President and his family members related to the presidential election campaign. (We always thought, and continue to think, that any Trump crimes will likely be of a business-nature, and this is an area under separate, and intense investigation currently).

Furthermore, we know that the powers of the Presidency are enormous and that Presidents can protect themselves like no other citizen can. It is a myth that in America no one is above the law – the president is. We watched this very process in South Africa with the disgraceful Ex-President Jacob Zuma. It is by way of obstruction that Presidents might circumvent facing justice. Presidents have powers to avoid being interviewed by prosecutors – something that no other citizen has. In Trump’s case, he refused interviews by prosecutors, he undermined the criminal justice system, he fired the Attorney General and put in a lackey, and he certainly did things that were very bad – but not things that could be proven as criminal conspiracy in contravention of current laws. Herewith a short list of such things:

One could go on. The likelihood that the Russians have something over Trump – that he is a Russian asset – is in our view great. Immoral and unethical conduct by Trump is a certainty. Corruption, compromise and collusion, are highly likely. Trump had publicly solicited the help of an enemy of the state, one with whom he had hidden financial ties, and that enemy helped to get him elected. He then rewarded them with a defense of their attacks on the US democracy and with policy benefits (like Syria, Magnitski Act etc).

In terms of current Department of Justice regulations the legal system cannot prosecute a sitting President. For the prosecution of a sitting President the prosecutor is Congress and the process is political, not legal. On this matter the Special Counsel laid out the evidence in his report to the Attorney General, for onward transmission to Congress.

Attorney General Bill Barr received the Special Counsel’s Report and within some hours announced to the world that the Special Counsel had found that he could not prove beyond a reasonable doubt all of the elements of a criminal conspiracy between the Trump Campaign and the Russian government. And although there was some evidence to support a charge of obstruction, he, Bill Barr, had made the decision that there was no charge to be answered in this regard either. (But of course this is a decision for Congress, not the Attorney General).

Now a note on Bill Barr: Last year Bill Barr was an attorney in private practice in Washington DC. In June last year he wrote a 19-page open letter to the Department of Justice setting out his position that the Special Counsel is wrong to be pursuing an obstruction charge against the President and that the President cannot be guilty of a crime. (This truly bizarre letter with many made up “facts” can be read at (https://www.documentcloud.org/documents/5638848-June-2018-Barr-Memo-to-DOJ- Muellers-Obstruction.html). A matter of months later President Trump fired his Attorney General, Jeff Sessions, as Sessions would not comply with the President’s demand that he ‘protect’ the President (i.e. quash the Special Counsel Investigation). Following a brief interlude with a very damaging lackey as Acting Attorney General (Matthew Whitaker), Trump had Barr installed as Attorney General.

Trump’s Attorney General has put his thumb on the scale of justice and one must wonder why.

But this is not the end of this sordid business. We expect Congress to subpoena the Special Counsel’s Report and we expect damaging revelations to come out of the Report. And certainly, the Special Counsel spawned many cases that are now being run by the FBI, Department of Justice and other law enforcement offices that, in our opinion, spell the real trouble for Trump. Here we anticipate money laundering of Russian funds and other financial crimes (as alluded to, two years ago in our Note).

We see so many parallels between the current US president and the former South African president. Both men are of questionable character with all sorts of sexual misconduct allegations and financial improprieties in their backgrounds. Both lie and cheat at will. Both see no reason not to destroy institutions of state in furtherance of their own personal agendas. Both are able to cultivate, through force of personality, hordes of loyal followers who can see no wrong.

Presidents like Zuma and Trump inevitably offer some good tidbits, but on the whole, they are extremely damaging to a nation and cause an imperceptible, slow, chipping away at the esteem of their countries, and trust in their currencies. And of course, as we quoted Yuval Harari a year ago: “Trust is the raw material from which all types of money are minted”.

Last year South Africa gained a new president who by most accounts is a high-quality man with good intentions, but the country is incredibly, and probably irreparably, damaged. The US might get a high-quality new president (from either political party), next year, and we hope for the sake of all Americans that it does. Meanwhile, as the RSA and the USA (and most countries of the world) deteriorate, the antidote to their bad leaders, as they break down the trust in their nations and their currencies, is gold.

For a portion of our wealth we like not having to trust powerful people. It lets us sleep better.