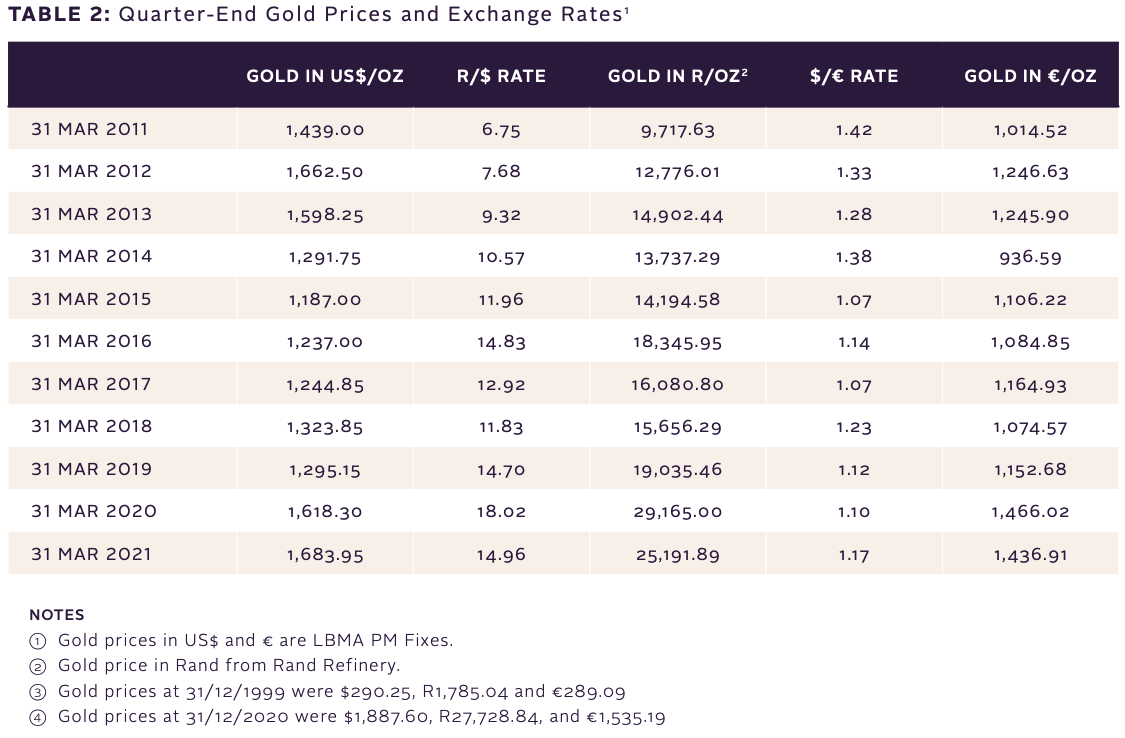 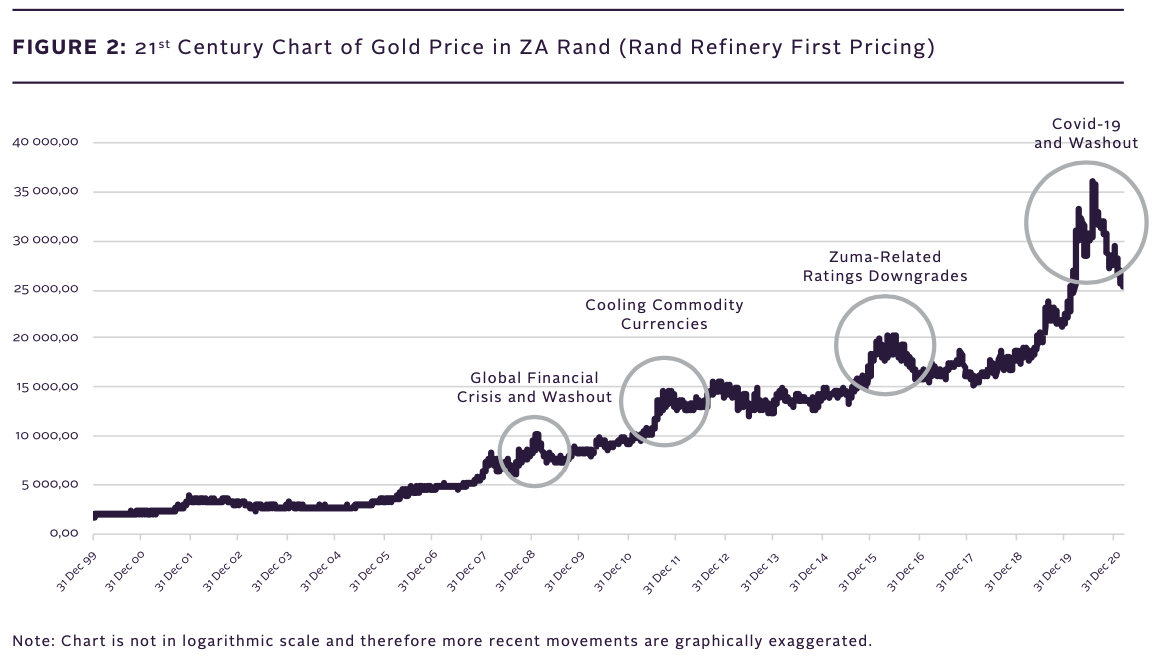 The preceding charts best tell the story of recent gold price action. In the past year gold made a huge Covid-related surge and then an equally large pullback to regain the long term trendlines.

In US Dollar gold experienced a very poor first quarter to take the 12-month result to being only slightly up. Price performances over three years and over 21¼ years (i.e., since 31 December 1999) have been outstanding.

In South African Rand gold experienced a very poor first quarter similarly to that in USD, but over 12 months the numbers are worse than in USD. The poor 12-month result is due to massive Rand appreciation against the Dollar as indicated by the currency exchange rate moving from R18.02/$1 to R14.96/$1. Price performances over three years and 21¼ years have been outstanding.

The month of March last year (i.e., March 2020) was extraordinary due to the market reactions that had been set off by the emergent SARS-CoV-2 pandemic. Prices of currencies, commodities and securities became highly distorted by 31 March 2020 and these prices will serve to distort the long-term picture for many years to come. Long term investors should pay little attention to the wild short-term gyrations and maintain focus on the big picture which looks ever better for gold versus cash.

In the fourth quarter of 2020 the US economy improved slightly. This followed the catastrophic second quarter followed by the resurgent third quarter. Of course, this immense volatility was due to Covid-related lockdowns and re-openings.

The Financial and Insurance Sector led the way in the fourth quarter, and the year closed with a US GDP result of -3.5% for 2020. Pre-pandemic the expectation had been for economic expansion of around 2.2%. The size of the US economy as measured by GDP stood at $21.49 trillion at year-end, down from $21.75 trillion a year earlier.

The combination of Trump tax cuts for the rich and the economic devastation caused by Covid has had a staggering effect on government finances. These can be best summarized in the following figures: 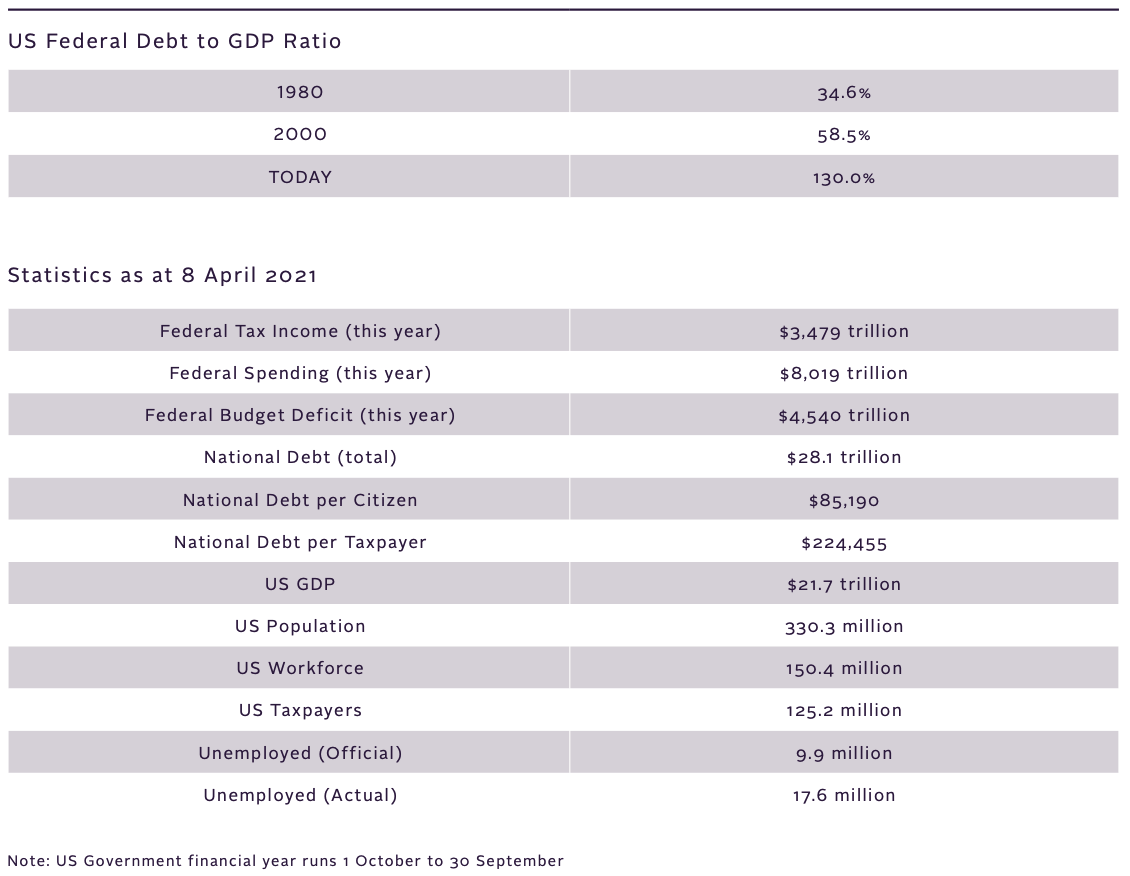 Clearly the extremely negative economic and fiscal effects must manifest themselves, and the question must be: “Where?” Whilst there are, of course, some winners, the greatest long-term loser must be the Dollar. And the counter-currency to the Dollar that must benefit as the winner, is gold.

Since the current US Dollar was established in 1913 it has suffered a long-term downtrend (with bouts of reversals) due to ongoing currency debasement by government. It is for this reason that the purchase of an ounce of gold required $20.67 in 1913, and today that identical purchase requires $1,747.36. Importantly, most of this debasement has occurred in the period since 1971 when the US went off the Gold Standard. In these 50 years the number of Dollars required for the purchase of an ounce of gold has gone from $35.00 to $1,747.36. Also importantly, the rate of change is accelerating.

The noble metals are those metallic elements that resist oxidation and corrosion. They are also rare, attractive, durable, and workable, and are of high unit-value. These metals include gold, silver, platinum, and palladium. Of these noble metals two of them have long and outstanding histories as monetary assets, namely gold and silver.

Many countries of the world have had gold-backing for their currencies at times now past i.e., they were on the Gold Standard. A significant proportion of these countries have employed the Bi-Metallic Standard, where their currencies have been backed by both gold and silver.

Silver, like gold, is traded 24 hours a day, across the time zones in major centres, viz., London, Zurich, New York, Chicago, Dubai and Hong Kong. London is the world’s main centre for the physical silver trade and the London Bullion Market Association (www.lbma.org.uk) is the key silver pricing agent, as it is for physical gold.

In South Africa silver is traded as a precious metal but with the introduction of the Precious Metals Act in 2005, silver has been excluded from the definition of “precious metals” and in so doing it has been legislatively deregulated. Therefore, unlike gold it can be freely traded within South Africa in any form. As with gold, the trading of silver incurs Value-Added Tax, with the one exception for gold being the Krugerrand (in its four forms viz., one-ounce, half-ounce, quarter-ounce and tenth-ounce).

In the 21¼ years of this century the price of gold has progressed from $290.25 to approximately $1,740 and the price of silver has progressed from $5.33 to approximately $25.23 (both per Troy Ounce and at time of writing). In other words, gold has risen by a cumulative 499% and silver has risen by a cumulative 373%. However, single performance numbers are not very helpful in a comparison. Much more helpful is a picture of the two monetary asset metals from the time of President Nixon effectively taking the world off the Gold Standard in 1971. See chart following. 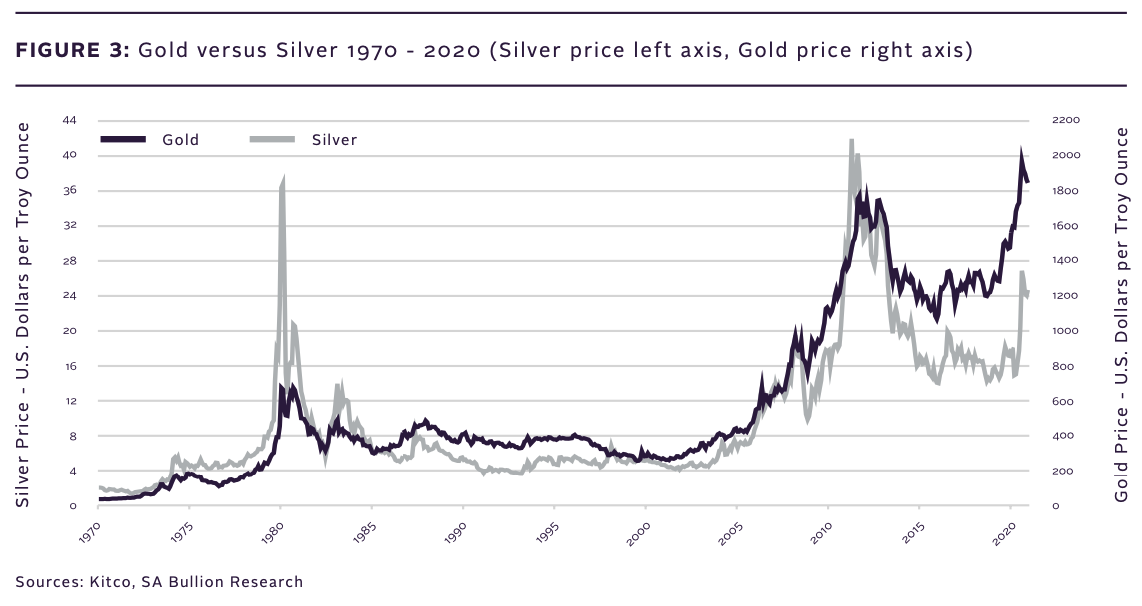 The key take-aways from the 50-year perspective in Figure 3 are:

In a final look at long term comparatives, in the following chart we review Gold versus the Dow Jones Industrial Average in the period since the beginning of this century.

The DJIA is an equity index that includes the shares of 30 of the largest US corporations including Apple, Boeing, Johnson & Johnson and Visa. Whilst we do not view gold as a competitor to shares, but as a competitor to currencies, it is interesting to note that gold has strongly outperformed the DJIA this century. The index performance would be slightly better if this index included re-invested dividends, but not much. Gold is certainly proving to be a useful component in a portfolio with shares.

We are pleased to advise that SA Bullion will shortly launch a silver investment service. Since Day 1 we have been advocates of silver, but only in an academic sense. We have been unable to distill a silver offering that would have the economics that we could support.

Silver does not pack the high-density value that gold does. To match the value of one ounce of gold requires approximately 70 ounces of silver. This weight and value difference translates into a huge difference in the cost of refining the high-value ore that enters the refinery. Newly refined gold is priced with a small premium for the cost of refining, while in the case of silver the premium is around three times as much.

A second problem with silver in South Africa is that its purchase attracts full value-added tax. This is true even for the new Silver Krugerrand, as it is not legal tender (as is the case for the long-established gold Krugerrand).

The SA Bullion International Facility will shortly add a fourth product to the three existing gold options viz., Krugerrand, 100g Minted Bar and 1kg Cast Bar. This fourth option will be a 1kg silver Cast Bar. The bar is due to be manufactured as an “SA Bullion” branded cast bar and will consist of 1000 grams of 999.9 silver.

The SA Bullion silver bar will be available in our international investment service only, and vaulting will be offered in Dubai only. The bar will be manufactured by Al Etihad Gold, our internationally accredited Dubai refinery in the heart of the most liquid silver market in the world. Whereas the usual costs for acquiring silver in South Africa are in the region of 45%, our clients will acquire their SA Bullion silver bars at a cost of 8% over the silver price plus the International Bank and Compliance Charge of $150. The refineries in Switzerland do not refine ore. They refine secondary market material – and this is similar in Dubai. But whilst similar, Dubai has liquidity (volume and flow) that is unparalleled and, as always, liquidity drives down prices.

Our minimum investment requirement for the silver option will be $10,000. Our usual Facility fee of 1% per annum will apply.

Our flagship offering remains gold and we will not be reporting on silver in any meaningful way. Our Silver offering is intended for institutions and for individuals with specialist knowledge.

We expect to launch our new silver offering by the end of April and look forward to advising you when the time arrives.