The SA Bullion Gold Report    First Quarter 2022   Analyst: Hilton Davies Date: 10 April 2022 GOLD PRICE ACTION   In the first quarter USD Gold advanced more than $100 per ounce or 7.1%, largely in response to the Russian invasion of Ukraine. In addition to a strong quarter USD Gold had … Continued 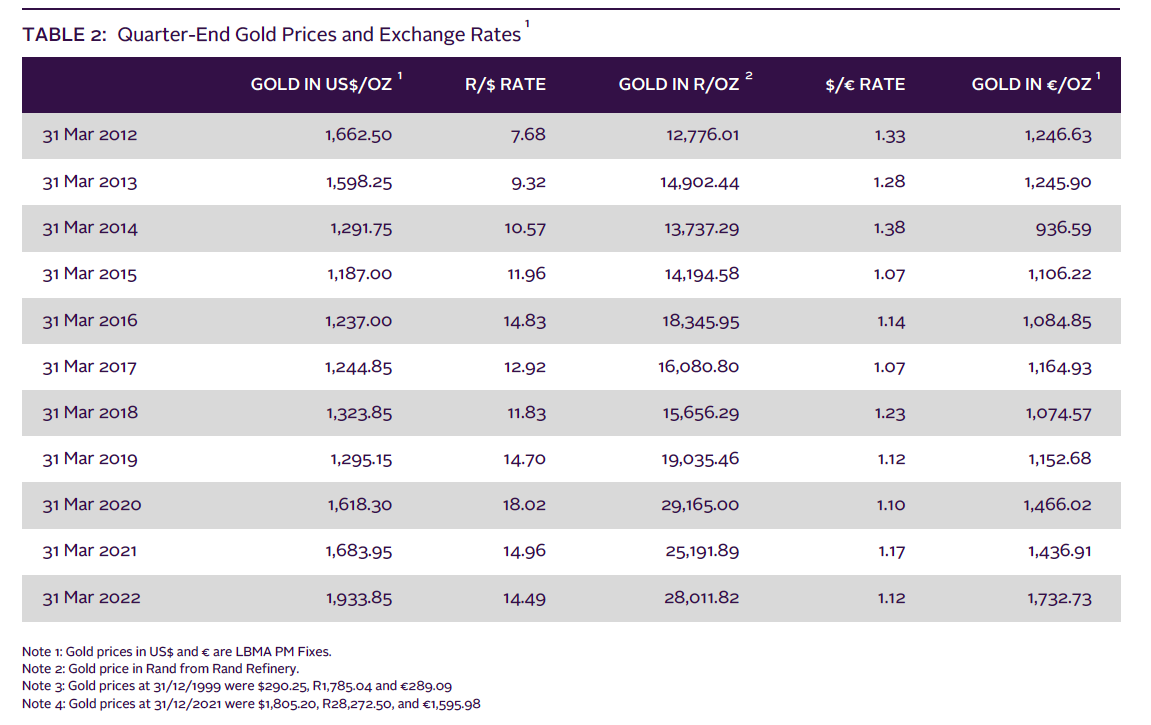 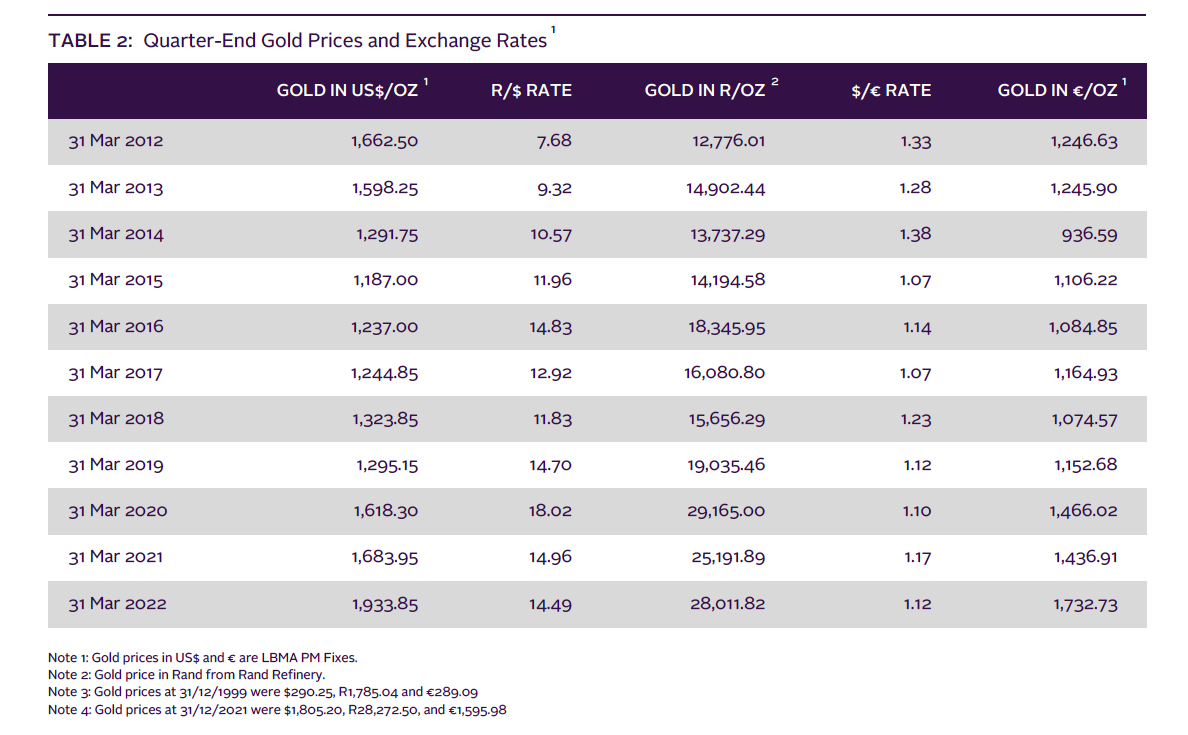 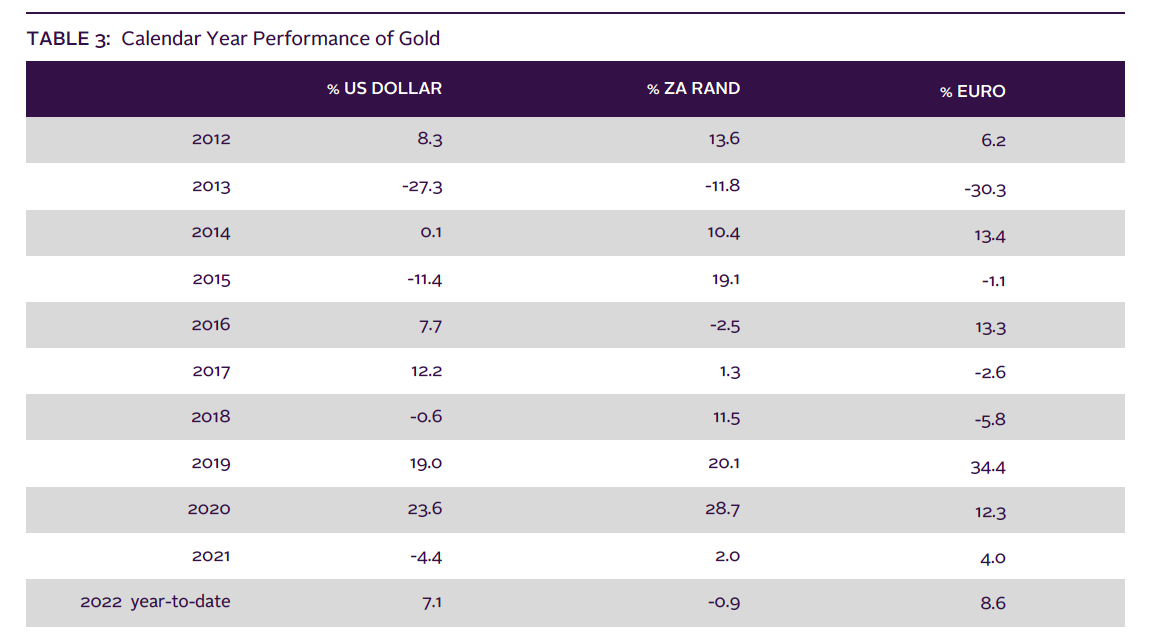 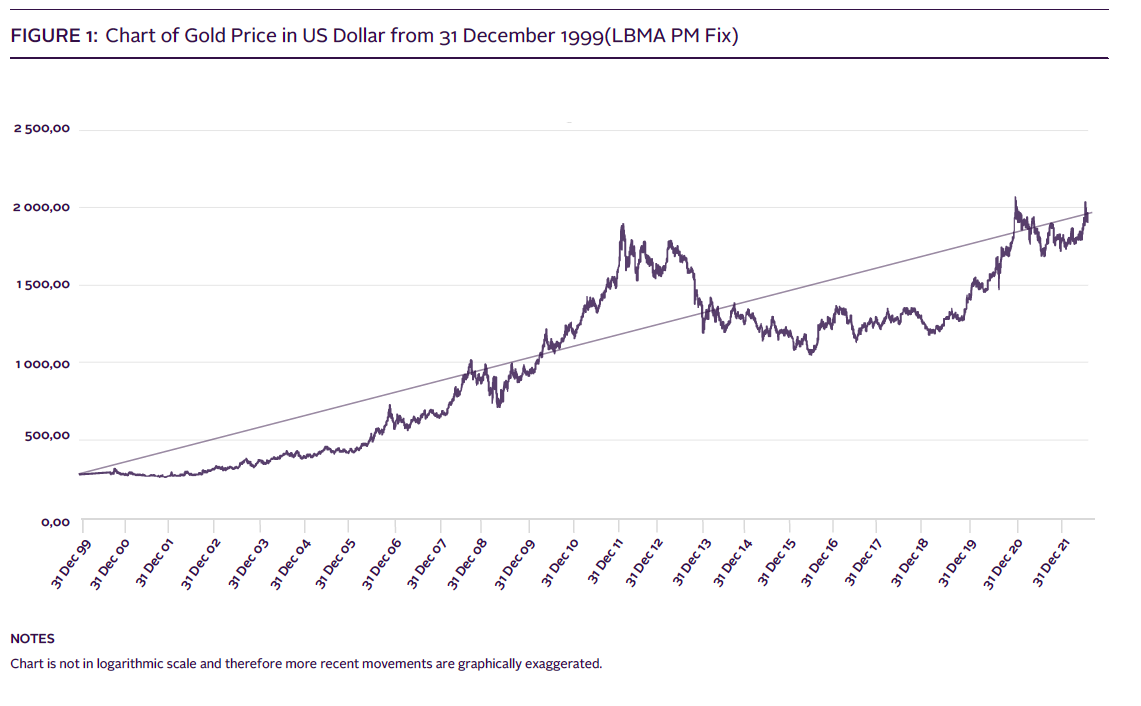 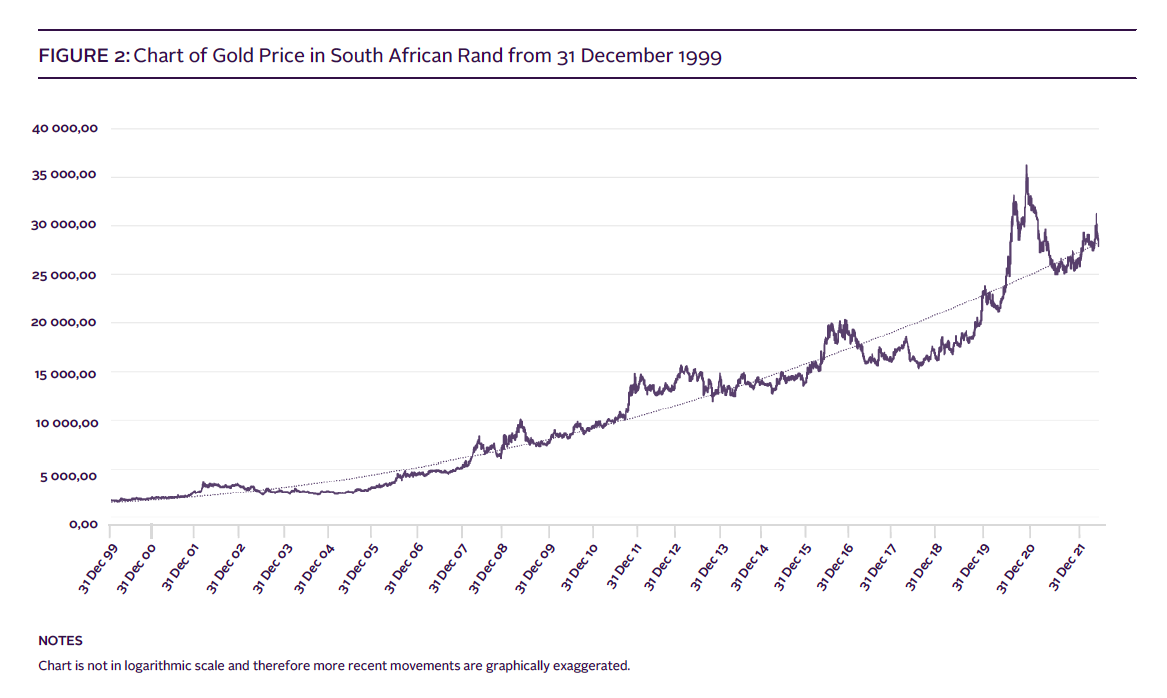 In the first quarter USD Gold advanced more than $100 per ounce or 7.1%, largely in response to the Russian invasion of Ukraine. In addition to a strong quarter USD Gold had a very strong 12-month period, up almost 15%. Price performance over three years has been very strong and over 22¼ years (i.e., since 31 December 1999), performance has been outstanding at 8.9% compounded annually.

ZAR Gold experienced a weak first quarter, entirely due to dramatic strengthening of the Rand. The South African currency appreciated 7.5% in just three months when the rate moved from R15.66/$1 to R14.49/$1. Over every longer measurement period the picture is quite different. Over the last 12 months ZAR Gold is up more than 11%, and the numbers are similar for the longer periods. Price performance over 22¼ years has been outstanding at 13.2% compounded annually.

It has been interesting to observe the gold price denominated in Euros. EUR Gold has been exceptionally strong in the past quarter and year, due to a combination of strong USD Gold performance and very poor Euro performance. Over the last year the Euro has given up 5% relative to the Dollar. Over the last ten years the Euro has given up nearly 20% relative to the Dollar.

In early-1989 the USSR admitted defeat following their invasion and nine-year war with Afghanistan. Later that fateful year, in November 1989 the Berlin Wall came down. Soon thereafter the Iron Curtain came down and the great Soviet Empire collapsed.

More than any other symbolic event, the tearing down of the Berlin Wall by the disillusioned citizens of communist countries, signaled the end of the Cold War. The Cold War was that period that began following World War II when the US and the USSR became the two dominant and antagonistic superpowers of the world. They avoided direct conflict for fear of mutually assured nuclear destruction but ran proxy wars and aggressively threatened and undermined each other.

Europe has been an eons-old battleground and for many centuries it was entirely usual for a country to expend half of its economic output (50% of GDP in today’s language) on war. Many times, countries would spend even up to 80% of GDP on war. This wasteful expenditure of precious capital and destruction of human productive capacity ensured that economic growth was paltry, and that society remained essentially two-tiered, with the rich and the poor. The global middle class remained small.

The collapse of the Soviet Union curtailed the great and belligerent military threat that it presented. First World countries (i.e., highly developed nations) were able to slash military spending and channel productive capital into health, education, welfare, and development. First World countries soared. The Peace Dividend was released, and the world has flourished for 30 years.

In a NATO pact of 2014 member countries committed to spending a minimum of 2% of GDP on defense by 2025. Member countries have mostly been well-below the 2% target. The estimated range for 2021 for the 30 member nations is from a high of 3.82% for Greece, to a low of 0.57% for Luxembourg. Generally, the closer to Russia the higher the defense spending. See tables for highest proportionate expenditure on defense, and highest monetary expenditure on defense by NATO countries in 2021: 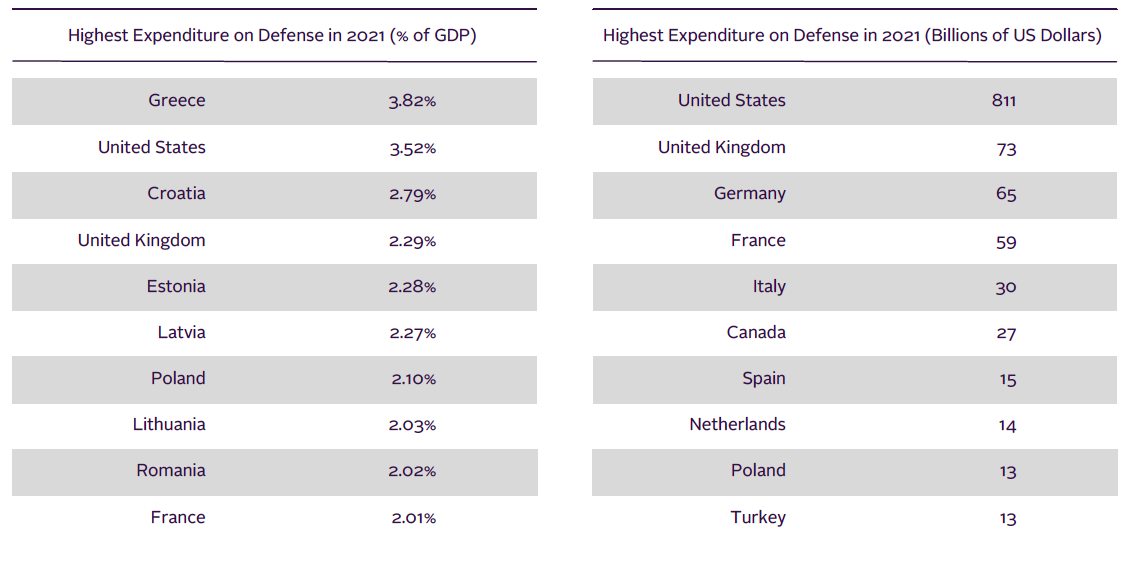 The Russian Invasion of Ukraine is unlike other invasions and wars of the last thirty years. This is not simply a regional war, and it is not another proxy war (USA vs USSR). This invasion is significant because Russia has attacked the Liberal International Order by invading a democratic and sovereign nation. In so doing Russia has ended the flourishing times that were introduced in 1990. The near-optimal deployment of capital in Europe and NATO countries has been brought to a screeching halt. Vladimir Putin’s invasion of Ukraine has ended the Peace Dividend, for Europe, NATO countries, the Highly Developed Nations, and the whole world.

In the first week of Putin’s invasion of Ukraine, Germany announced a doubling of its defense spending from one day to the next. All NATO countries and most foreign allies are ramping up their military-spend at the expense of more productive endeavours. The chief victims of this reallocation of fiscal spending will be the global middle class (who will see less healthcare, education, welfare, and development for their taxes) and global political stability (which does poorly when the middle class is thinned out).

There is no reversing of this process. Putin and the Russian government have shown that they cannot be trusted on the big things, and the First World countries must protect themselves in more of a Cold War vein, no matter how unappealing.

The great economic and social benefits of the Peace Dividend are now being undone.

Evaporation of Global Food Security – a return to mass starvations

The Russian invasion of Ukraine happens to have another major consequence – one that comes from the world no.1 grain producer invading the world no.5 grain producer. Whilst the global middle class will suffer from unwinding of the Peace Dividend, the poor will suffer from greatly elevated grain prices. The food-stressed, over-indebted, poor countries (mostly in Africa, the Middle East, and South and Central America) will not only contend with much higher basic food prices, but they will also find that with much less disposable income in the budgets of rich countries, food aid will be less forthcoming. As it is, around 10 million humans die each year from starvation [source: www.un.org]. That number will rapidly rise by hundreds of percent.

The people of dozens of countries like Yemen, Ethiopia, South Sudan and Haiti will pay a high price for Putin’s invasion as wheat, cooking oil and other commodities skyrocket in price and collapse in supply.

From an economic perspective Russia can be viewed as a giant petrol station. The country is a major gas, oil, and coal producer. Energy sanctions and threats to supply have caused commodity prices to rise dramatically and these price changes will cause financial hardship across the globe and outsized hardship for most emerging nations.

Putin has offered various reasons for invading his neighbour:

If Putin should be successful with his invasion of Ukraine, the geopolitical implications for the world will be considerable:

Win or lose, there are big implications ahead. No matter the outcomes, we can expect a massive and ongoing cyber assault by the Russians on NATO country infrastructures. Electricity grids, nuclear power stations, state agencies, financial systems and energy systems (like the May 2021 ransomware attack on Colonial Pipeline) will be high priorities for destabilization and revenge.

At SA Bullion we cannot predict the military results of the Russian invasion of Ukraine. But we do have some very clear macro-economic thoughts:

Third world countries are where politics is equally as important to the health of currencies as economics. Rising geo-political risks means rising risks for the Rand.

Gold is the ultimate safe haven in such times. Everyone should own some physical gold.