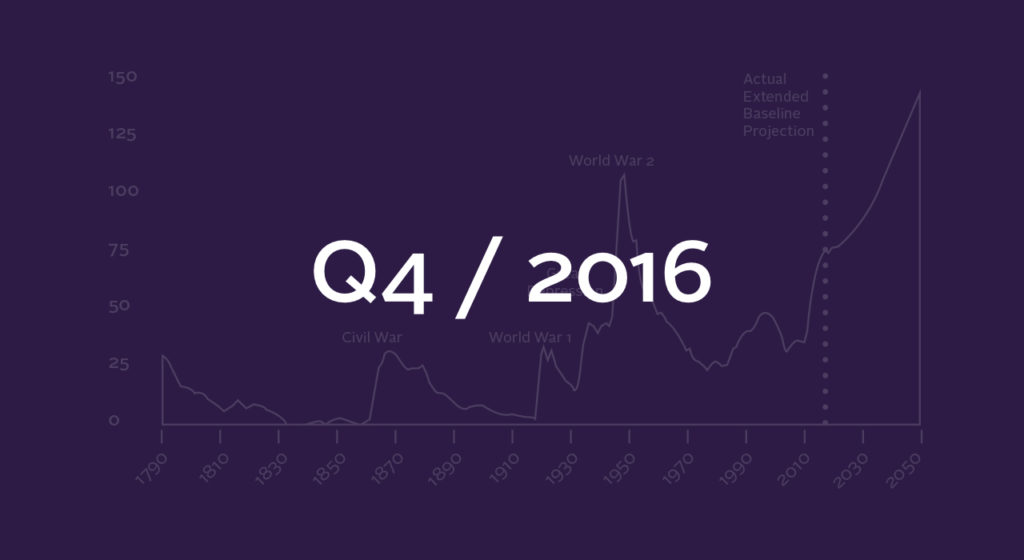 Note 1: Gold prices in US$ and € are LBMA Afternoon Fix prices
Note 2: Gold price in Rand from Rand Refinery 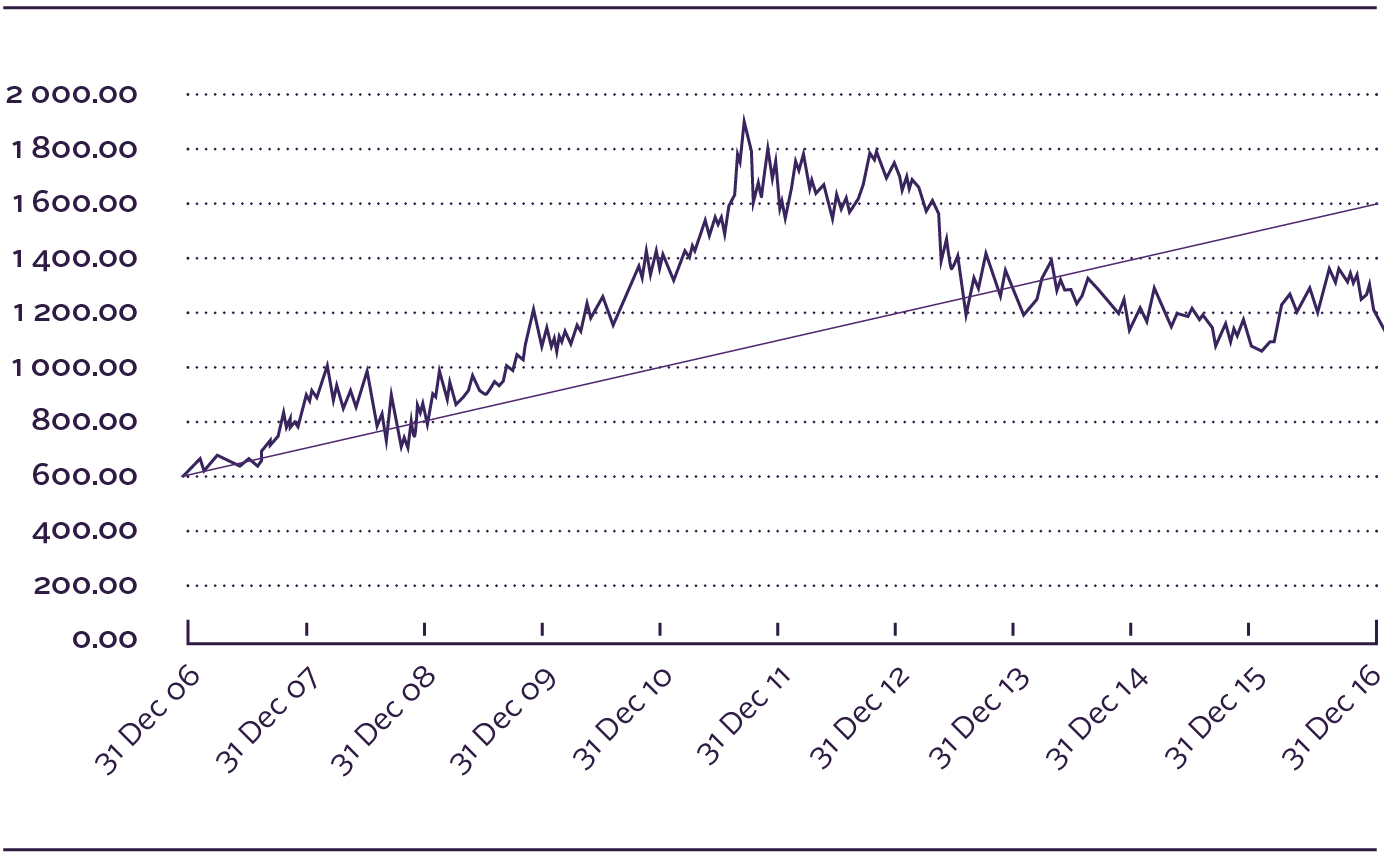 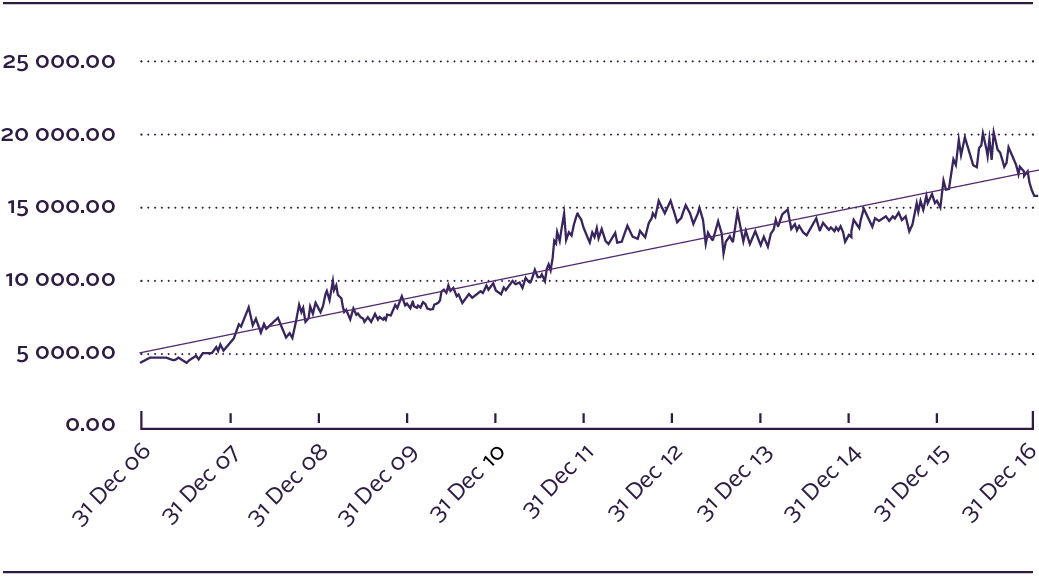 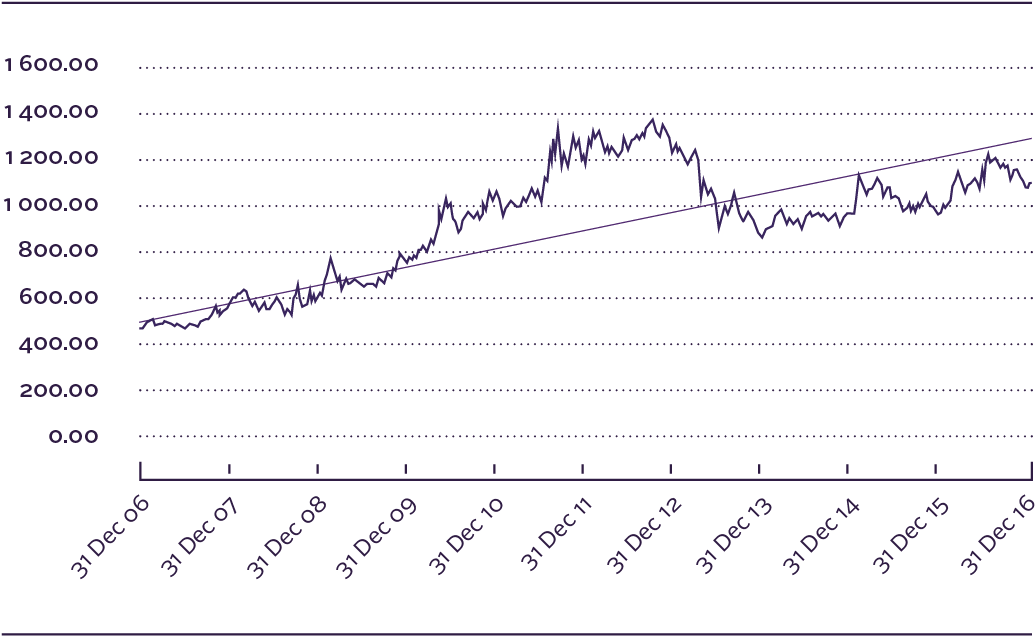 The fourth quarter of 2016 proved to be a grim three-month period for gold. The gains of the first three quarters, 15.8%, 6.8% and 0.1% were largely erased, and gold ended the year up 7.7% in US Dollar. Of course 7.7% in Dollar is a great result versus cash in the bank, but mid-year new money into gold suffered. Fortunately following the end of this reporting period we have seen fair price recovery.

It is a truism that in times of big price pullbacks, the poorer investor panics and exits, thereby realizing losses. Meanwhile the skilled investor typically commits fresh capital to the new bettervalue opportunity. At SA Bullion it has been gratifying to see our clients ‘holding the line’ and in large numbers committing new capital at rock-bottom prices.

The big gyrations of the fourth quarter are largely attributable to the US Presidential Election on 8 November and the victory by Donald Trump. At the start of the Election Day gold was priced by the London Bullion Market Association at $1,160.65. As vote counts started to indicate that Trump could win financial markets began to panic and one of the results was that gold rose quickly (and the Mexican Peso went to pieces!). The rise in the gold price however, was very short-lived. The LBMA Gold Price rose to $1,170.04 on 9 November but by 5 December it was down to $1,082.59 – its low point. The effect in Rand was far worse as the Rand strengthened during this time. At time of writing the gold price is back above $1,200 but I do not wish to distract from the storyline. The reasons for the price movements are not intuitive and are discussed in the US Review below.

Over 10 years gold has returned 6.2% per annum in US Dollar, 13.6% per annum in South African Rand and 8.8% per annum in Euro. These are highly credible returns, especially when viewed in the context of gold as a competitor to cash in the bank.

Those who know us well know that our story is ‘Gold in an Era of Unbacked Currencies’. To recap, President Richard Nixon closed the Gold Window in 1971 and this had the effect of taking all the currencies of the world off the Gold Standard (as a consequence of 1944s Bretton Woods Accord). SA Bullion, in effect, sees itself as offering clients a means of holding some of their currency position (i.e. cash) in the ultimate gold standard currency, namely physical gold bullion. With this in mind we offer you a long term performance perspective of gold as measured in unbacked currencies:

The first point to note is that we are referring to 45 years. Secondly we make no mention of performance in Euro. This is because the Euro only commenced on 1 January 2002 and is thus only 15 years old. Now regarding performance – we see that gold has produced a smoothed return of 8.1% p.a. in Dollar and 15.4% p.a. in Rand. These are excellent returns in any asset-class’ language, but when considering that they are the returns of a highly-secure, tangible, highly-liquid asset, they are exceptional!

Note further that these 45-year returns are nearly 2% p.a. higher than the 10-year figures reported three paragraphs earlier. Had gold not retreated so dramatically in the last few months this would not be the case and the figures would be almost identical. These returns are emblematic of our proposition.

A last comment on this subject for our South African investors: the difference in smoothed returns between the Dollar and the Rand amounting to 7.3% per annum reflects the loss in Rand value

Trump’s victory surprised the survey polls, the Clinton Campaign, the financial markets and Trump himself (and me!). Even though Hillary Clinton received nearly 3 million more votes than Trump, the fact of the matter is that Trump won the election. The US Electoral College system is not a ‘one man one vote’ system and votes from the rural areas enjoy a much higher value than urban votes.

The markets were priced and positioned for a Clinton victory, meaning pretty much more-of-thesame. Trump’s campaign was based on a model of fear, anger and resentment, with the result being that when he won, defence contractor and oil stocks went through the roof and tech shares went through the floorboards. As the markets had been caught wrong-footed, swift action was taken by the big money managers and global capital poured into the US chasing the defence contracting, oil and construction stocks. This had the effect of dragging overall markets higher, which in turn caused capital to pour into overall indices. These massive capital flows inbound into the US caused the Dollar to strengthen. Gold was liquidated and sold down so that the proceeds could chase rising assets.

Trump’s big promises to ‘fix the economy’ added fuel to the rally as discussed above. That rally though, appears to have ended and turned into retreat. Trumps promises of details as to how he would fix the economy have come to nought, with the exception of bullying of automakers to forsake manufacturing in Mexico in favour of manufacturing in the US.

Where we have seen detail in recent days it hasn’t been favourable for Trump and the US. Before proceeding, it is necessary to point out that one of Trump’s highly emotive campaign issues was the high level of US Public Debt (i.e. government debt). Trump was highly critical of the Obama administration for increasing the debt so much, and pledged to reduce this burden. On Tuesday 3 January 2017 Trump’s Republican Party tabled their budget resolution. It closely matched our figures and analysis as reported in our previous quarterly report (find on www.sabullion.co.za).

The Republican Party budget indicates much reduced revenues for 2017 due to tax cuts (mostly for the super-rich and big corporations) and an extremely large deficit. The projections over the next 10 years look grim indeed. 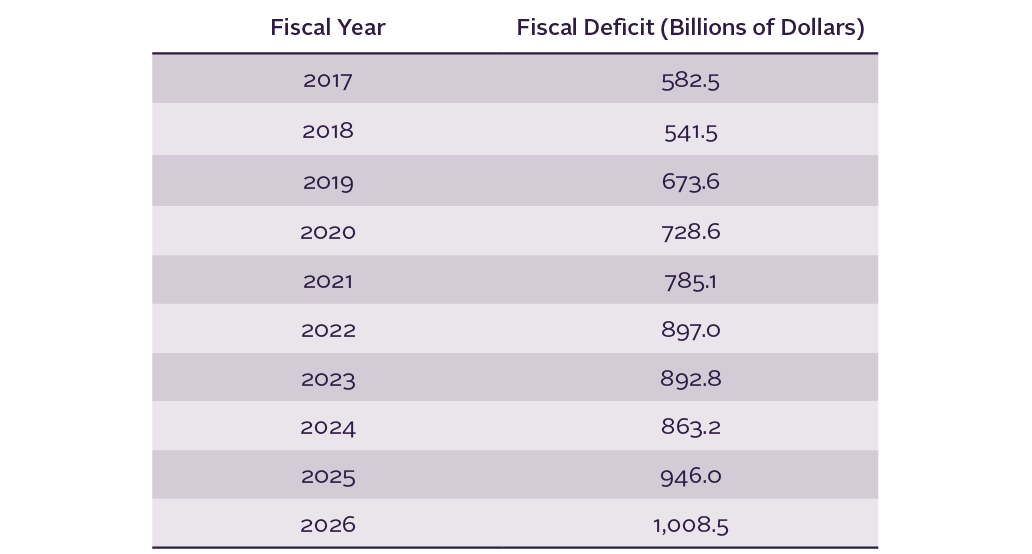 The tabled resolution is thin on detail and we consequently cannot offer much in the way of comment, but we can be sure to expect reconciliation bills to follow.

As an addendum to the above story about public debt, we look forward with interest to 16 March. On this date the current in-force suspension of the Debt Ceiling comes to an end. We expect that the hardline right that was so forcefully opposed to raising the ceiling, even to the extent of causing the 2013 Debt Ceiling Crisis, will now have no difficulty in raising it. “Draining the Swamp” only meant draining Washington so that they could fill it.

In December the Congressional Budget Office (see www.cbo.gov) published their Long Term Budget Outlook. The CBO projects Federal Debt rising to record levels over the next 10 years. To quote the CBO: High and rising federal debt would reduce national saving and income in the long term; increase the government’s interest payments, thereby putting more pressure on the rest of the budget; limit lawmakers’ ability to respond to unforeseen events; and increase the likelihood of a fiscal crisis.

Figure 4: US Federal Debt Held by the Public as % of GDP 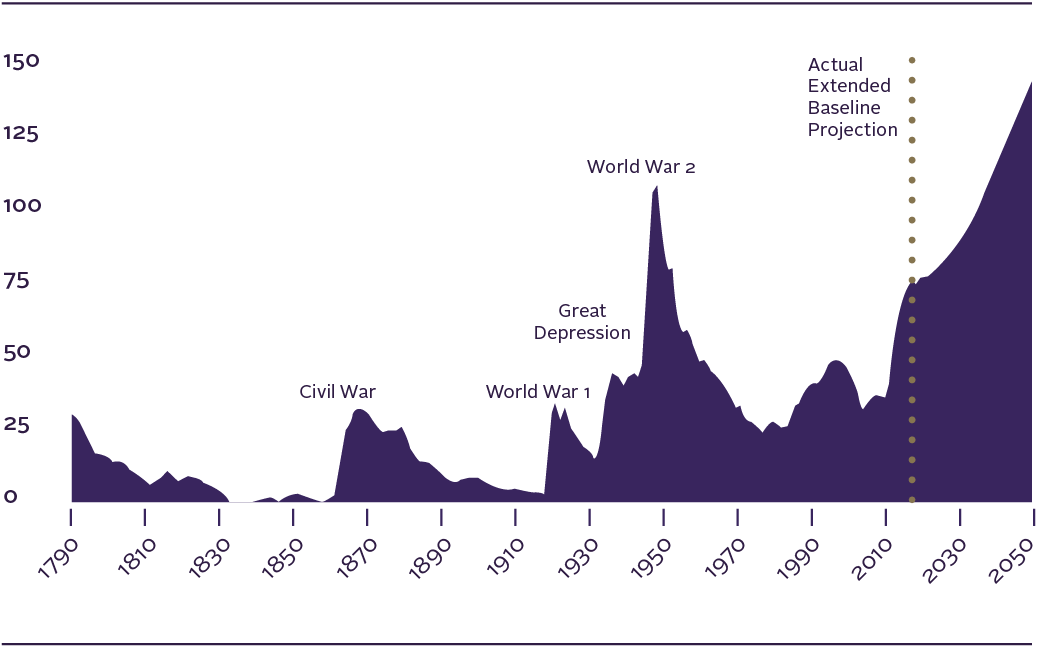 Following the Trump victory on 8 November we put out a Gold Update that can be found in the Magazine section of www.sabullion.co.za. We called a spade “a spade” and this caused a few of our clients to write in to us about our anti-Trump political stance that did not agree with their more favourable views of Trump.

To be clear: we did not and do not have a love of Hillary Clinton. The issue was, and remains, a very deep dislike of Trump’s rhetoric and deep suspicion of his motives as informed by his provable lies. His recent nomination for Secretary of State – a billionaire oilman who has demonstrably been an adversary of the US, does nothing to allay our suspicions. The appointment of his billionaire son-inlaw as Senior Advisor in the White House, does nothing to allay our suspicions. Trump’s selection of a man who is a close ally of the fossil fuel industry as new Head of the Environmental Protection Agency (even while he is suing the EPA!), does nothing to allay our suspicions. One could go on and on, but in summary it appears to us that the super-rich have won, that they are going to create great times for themselves, and that the little guys who voted them in are going to pay for it – largely by way of rising systemic risk and an ever-debasing Dollar. The protection lies in gold.

We were so worried about the Rand in 2016 and yet it turned out to be a good year for the currency. The unit improved from R15.26 to the Dollar to R13.80 by year-end. Our chief concern was that President Zuma would fire the Minister of Finance and ram a R1 trillion nuclear deal through parliament. The risk was not realized and as Zuma has continued to lose political capital it appears the risk has receded.

Economic growth in South Africa is dismal. In 2016 Gross Domestic Product increased a paltry 0.5%. For 2017 Nomura sees GDP growth at 1% while the South African Reserve Bank anticipates a figure of 1.2%. These figures are truly awful in a country that desperately needs growth to support employment and to deal with a rapidly expanding Public Debt.

US interest rates are likely to rise in 2017 thus putting further downward pressure on the Rand and Chinese momentum is likely to slow, thereby impacting exports. These are all good reasons to hold at least half of one’s currency exposure in gold rather than Rands in the bank.

As a firm we had a busy last quarter. Our new website went live following a year of hard work by our team, led by Imran O’Brien, working with a development team from the highly capable Cape Town brand agency Unisoul. We conducted a roadshow in Durban and Umhlanga led by Clint O’Brien, and we ran a new Financial Advisor programme in Cape Town led by Adnaan Bazier. All this while our business went through its highest rate of growth ever!

We have been hard at work on very exciting long term developments and we hope to bring important news to you in the course of this year.

In closing, we thank you for your support in 2016 and (taking a leaf out of our brand book), wish you love, peace, freedom and happiness in 2017.