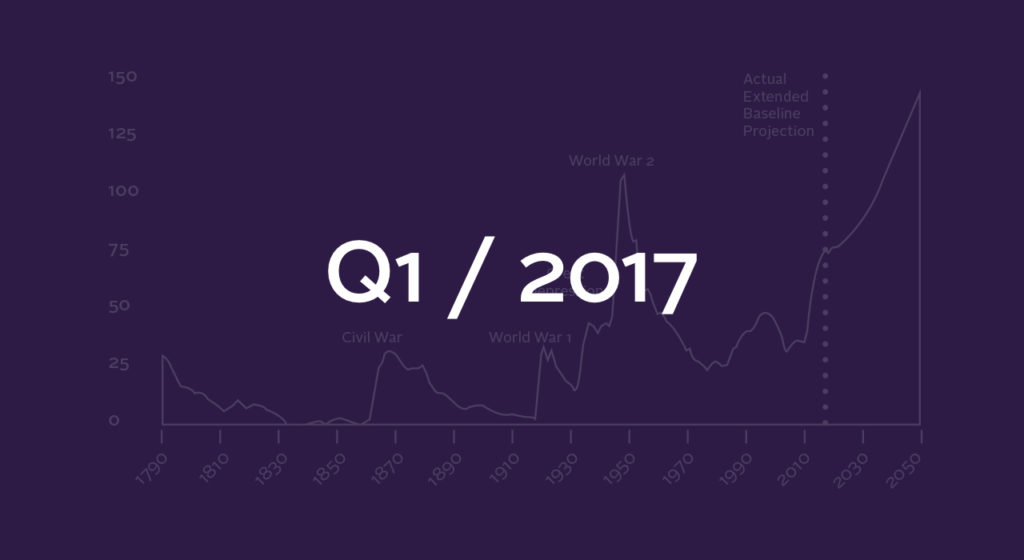 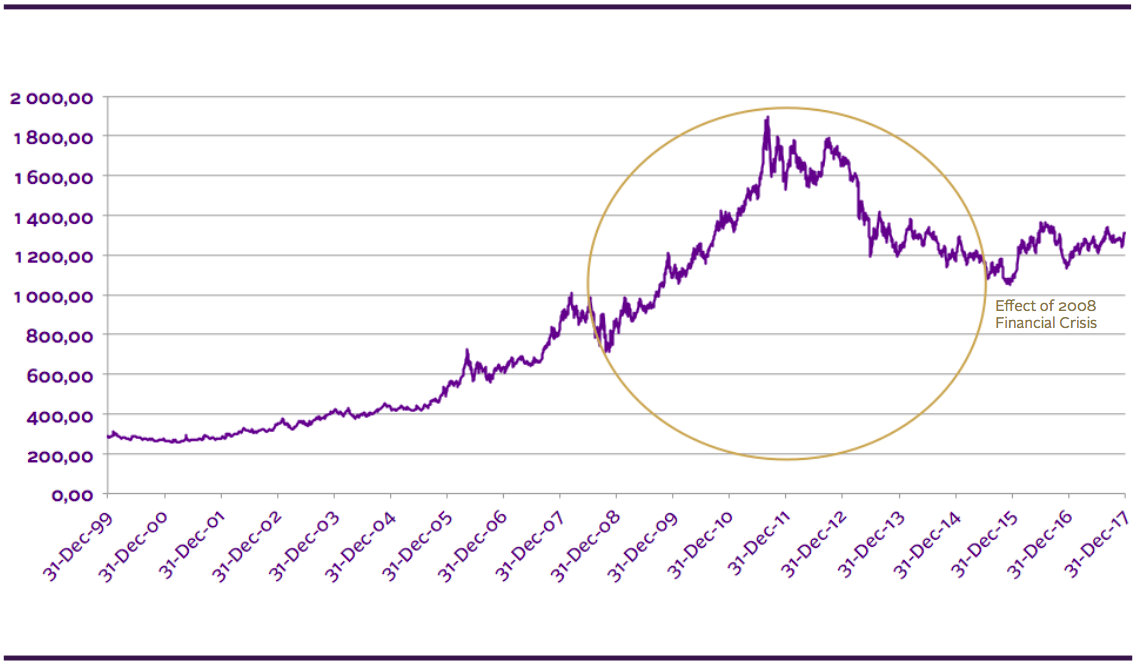 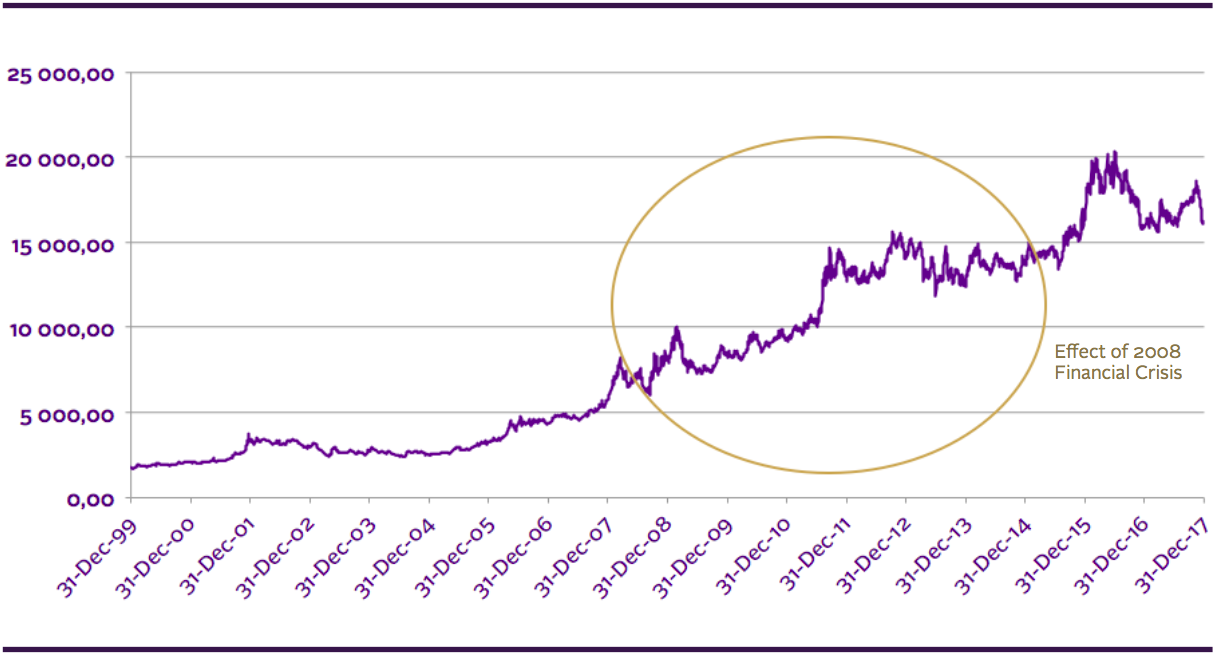 The gold price ran quietly uphill for the first half of the quarter and then careened downhill for the second half – a pattern that we have seen repeatedly for some years now. In the absence of evidence one does wonder if this repetitive pattern is coincidental or perhaps engineered by big operators manipulating prices. As people who have some understanding of mathematics and are fans of Freakonomics by Steven Levitt, we do understand how coincidences can fox the public. But then again, as seasoned market operators we also believe that there is much justification for skepticism and suspicion of big market operators.

For the fourth quarter the gold picture in Rand is quite different from that of Dollar, and in explanation there are two main reasons. Firstly, the Dollar weakened against major currencies. Secondly, the Rand strengthened massively against all currencies. These currency moves conspired to deliver poor performance for gold in Rand. For the quarter gold in Rand lost value to return -7.4% and for the year made a small gain with a return of 1.3%. 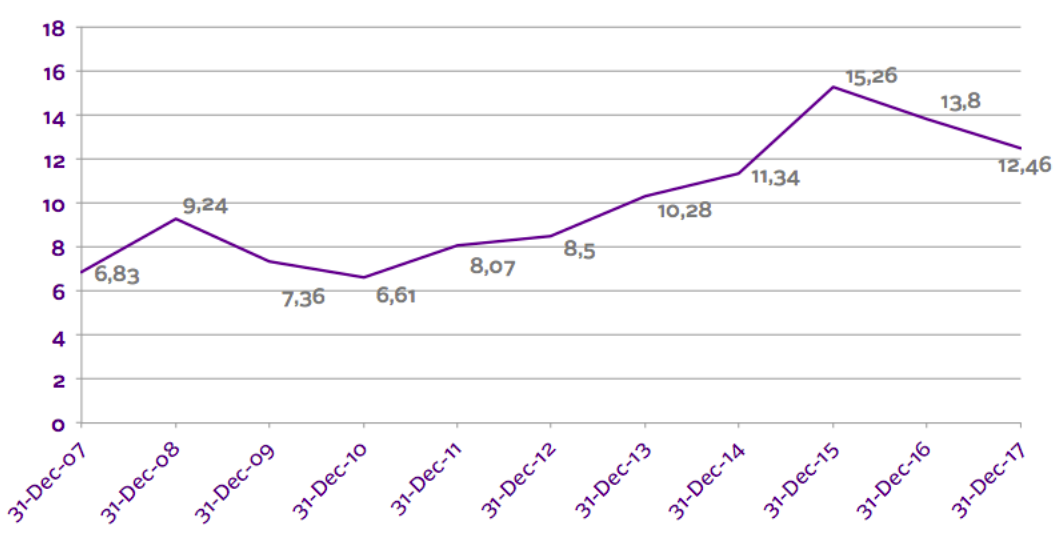 Of course the recent Rand rally has been due to the late-December ANC presidential victory by Cyril Ramaphosa. If currencies are anything like shares one might “buy the rumour, sell the fact” but although there are many similarities there are also many significant differences.

Recent news headlines would seem to indicate a booming economy in the United States. But this is not so. Ten years of bail-outs, quantitative easing and fiscal stimulus are collectively breathing some life into economic activity, but current euphoria about the economy and financial markets is not deserved.

Optimists will point to economic growth of 3.2% in the third quarter of 2017 (Real GDP Third Estimate: Bureau of Economic Analysis). This number, which is in itself rather mediocre considering the greatest financial stimulus in all of history, masks a once-off windfall which was due to insurance payouts and recovery spending due to hurricanes Harvey and Irma, as well as wildfires in California. This is a classic example of turning capital into income.

The US manufacturing sector has completed its longest run in recorded history where it has not surpassed a previous high. Just one month shy of 10 years, this critical component of Industrial Production has not regained previous 2007 highs, this notwithstanding a population increase of 25 million people. The same can be said for the construction and real estate sectors. A reading of the latest National Income and Product Accounts as published by the US Bureau of Economic Analysis (www.bea.gov) informs us that Personal Consumption Expenditure (PCE) and Residential Construction categories accounted for 73% of headline real Third Quarter 2017 GDP. This means that approximately three-quarters of the US economy relies on the consumer. And what we see is that the US consumer continues to confront financial stress, as witnessed in payroll employment, retail sales, housing and manufacturing statistics.

The severely limited growth in sustainable real incomes and the lack of uptake of consumer debt are at the root of the liquidity crisis and economic difficulties. For years our clients have been hearing us say: “ultimate aggregate demand drives the US economy”. With the liquidity-starved consumer driving three-quarters of GDP it is just not possible for the broad economy to produce growth of around 5% per annum – as we used to expect, some years ago.

The Republican Party currently controls the House of Representatives, the Senate and the Presidency. Using these levers of power the party managed to drive legislation through Congress that has provided massive tax cuts that attribute 80% of the benefits to wealthy individuals and to corporations. In the absence of any related effects, the reduction in income into federal coffers will cause the sovereign debt (or ‘Public Debt’) to balloon by $1.5 trillion over 10 years and cause an additional debt servicing cost of approximately $300 billion over the same period.

Should the President be successful with his infrastructure and defense spending plans, the debt is going to balloon a whole lot more than stated above. Notwithstanding the President’s strong pre-election position on not expanding the Public Debt, and in fact shrinking it, we always expected that his intentions were the opposite.

US stock markets had an extremely strong 2017 (S&P 500 +19.4% and Dow Jones +25.1%) and saw a continuation of the second-longest bull run in history – one that began in 2009. A strong finish to the year was largely on the back of the windfall gifted to corporations by the Trump tax cuts. The re-rating of share prices indicates that stockholders expect the benefits of tax cuts to come to them via increased earnings and not to employees via increased wages, or to new hires or to capital expenditure programmes.

It is a quirk of financial markets that usually the overall market (the “herd”) is wrong. This aphorism applies also to stress indicators. The St Louis Fed (www.stlouisfed.org), one of the 12 regional Reserve Banks making up the Federal Reserve, has produced their Financial Stress Index since 1994. In November this index produced a result of -1.6, the lowest figure ever since the index was established. This alone should get the attention of every market operator with an understanding of ‘herd-mentality’.

On 11 January 2018 we learned that the Federal Reserve is concerned about both the Trump tax cuts and about the exuberance in financial markets. New York Federal Reserve President William Dudley said that the new tax cuts will provide a short term boost but leave the economy more vulnerable in the years to come. He said that the cuts are likely to hurt US creditworthiness and are unlikely to bring about spending since corporations and the rich benefit the most. “There are some significant storm clouds over the longer term”, said Dudley. The New York Fed President also set out the Fed’s concerns about over-heated markets that are getting stimulated while they, the Fed, are wishing to see a cooling-off to avoid a hard landing. He said: “we may have to press harder on the brakes”.

The US economy is stodgy and a recent boost from insurance payouts and replacements is a head fake i.e. misleading and false. The Christmas tax cuts are great for the rich and for corporations, but will come at a great cost for the United States fiscus and will dramatically inflate the Public Debt. These items alone are Dollar-negative. Add to this economic backdrop a picture of an extended financial markets bull run that is presently overhyped by the riches of tax cuts and we have recipe for a day of reckoning, for both the financial markets and for the Dollar. The Fed could be forced into an unexpected policy reversal which would pummel the value of the Dollar and spike the price of gold.

South Africa’s big concerns have been the economy, credit ratings and political leadership. These remain the same.

The World Bank expects South African economic growth for 2017 to come in at a dismal 0.6%. It expects growth in 2018 to pick up marginally and achieve 1.1%. In the face of a population growing at 1.6% per annum and increasing demands from the poor majority, these figures are grim.

South Africa heads towards its 5-yearly general election in 2019 and as a forerunner the ruling party – the ANC – held its National Conference in December. In electing its top six officials Cyril Ramaphosa, currently Deputy President, was voted in to the top spot. By all accounts Mr Ramaphosa is a force for good. The new Chairman and Treasurer General, Gwede Mantashe and Paul Mashatile respectively, are also regarded as forces for good. The three other elected officials have extremely poor track records and are strongly associated with the current president, Mr Jacob Zuma, and much shady business. In an interview Jan Friederich of Fitch Ratings advised that Fitch expects policy uncertainty to persist despite the election of Cyril Ramaphosa. Mr Friederich also advised of concerns on the fiscal side as well as of economic growth. Politically he said that the intervening period of two heads (government and party) and divided decision making bodies within the ANC made for risk. Mr Friederich also spoke of the challenge that Mr Ramaphosa will confront in having to deliver to opposing groups in the face of inequality and a clamouring for redistribution.

Currencies are notoriously difficult to call. In fact, one can at best hope to be slightly more right than wrong. Considering all of the above, and with a long term view, we believe that gold presents itself as an excellent contender versus cash in the bank and as we draw closer to what is likely to be dramatic market action, gold also introduces a strong diversifier. Our advice? Hold a minimum of 5% of your wealth in physical gold bullion.

In this period when useful data and statistics have been scarce, we look forward to numbers and analysis for the next quarterly report.

We wish you a happy and prosperous 2018.