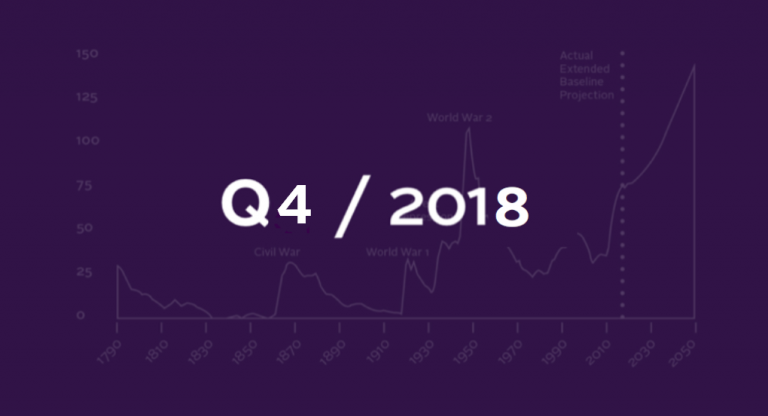 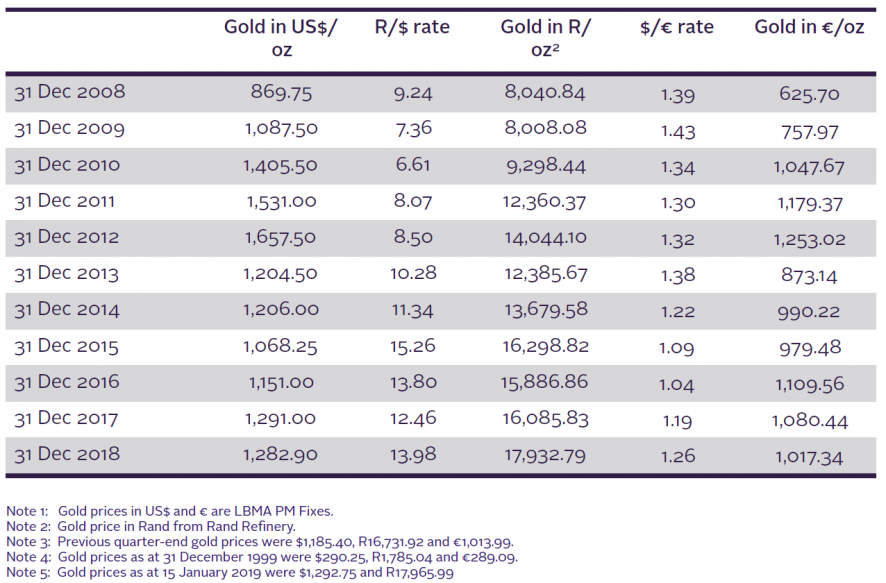 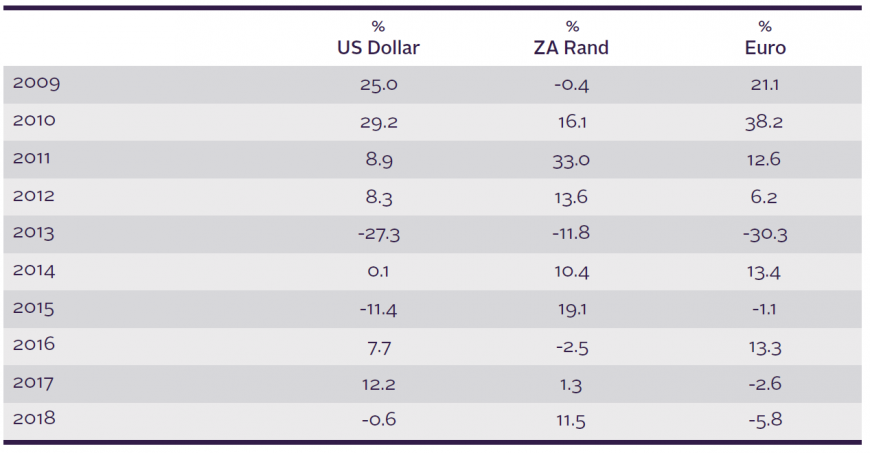 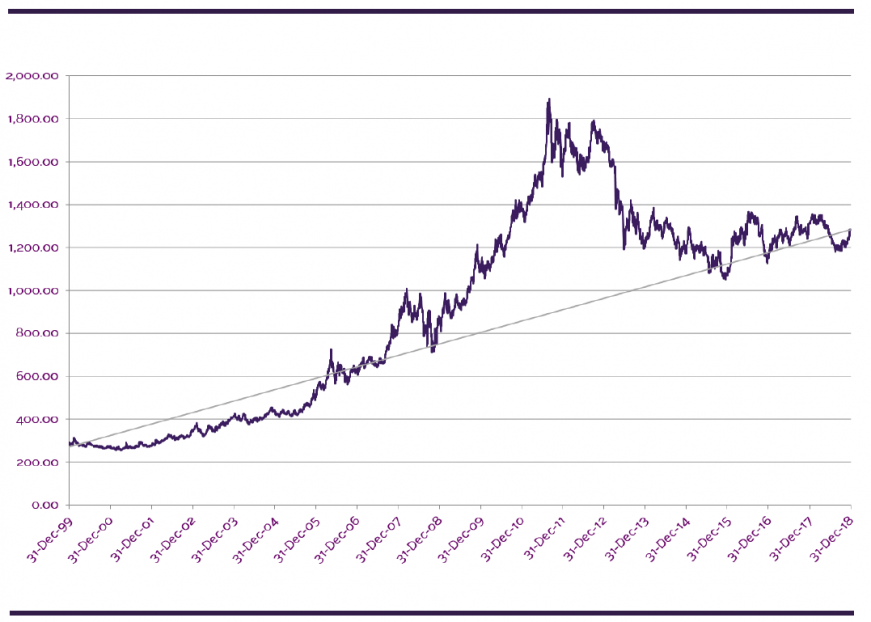 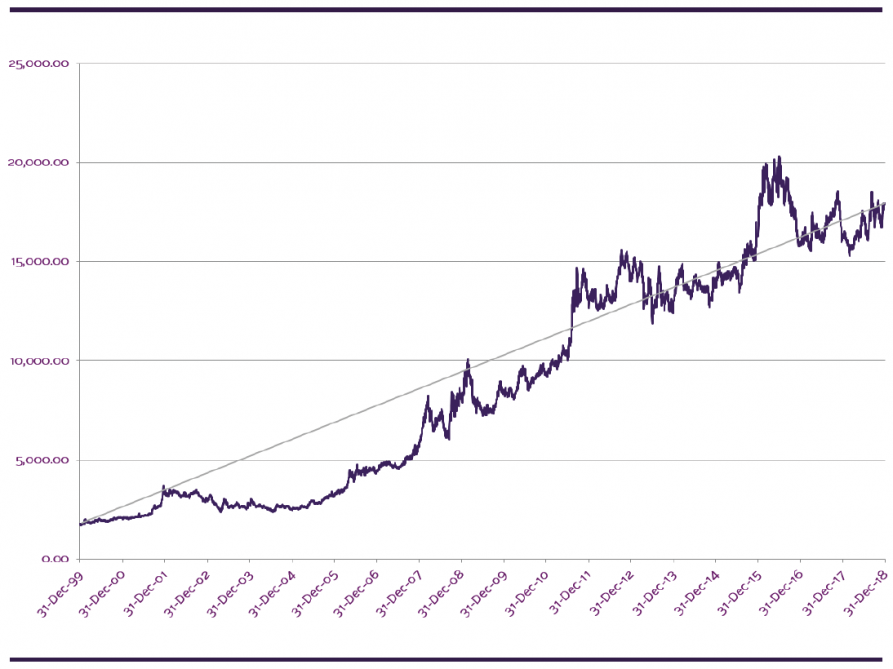 In the 19 years of this century gold has (approximately) gone from $290 an ounce to $1,290 an ounce. An 8.1% compound annualized growth rate is quite something to behold – for a tangible currency with no
risk of going bankrupt.

This quarter was an extremely strong quarter for gold. Gold rose 8.1% as the Dollar sagged due to concerns about the US economy in the face of the Federal Reserve (mistakenly) raising interest rates; and due to the negative effects of the US president setting off trade wars with the major trading partners of the country.

The year was flat, for gold in US Dollar, if one looks at the start- and end-points.

In the 19 years of this century gold has (approximately) gone from R1,800 an ounce to R18,000 an ounce. The compound annualized growth rate of 12.9% is just incredible. The precious metal currency has been
a fantastic currency hedge for South Africans.

This quarter was an extremely strong quarter for gold in Rand – up more than R1,000 per ounce. A little bit of Rand strength relative to the Dollar nipped off a bit of the 8.1% Dollar-performance to result in
Rand-performance of 7.2%. The actual story is that the Rand sagged, but just a little bit less that the Dollar did. Both currencies were awful in the quarter but their direct exchange rate hides this fact. The Euro held its ground.

The year 2018 was a big ‘up’ year for gold in Rand, due to a massive 12.2% fall in the Rand versus the Dollar, as the Ramaphosa Dividend washed out. Gold in Rand returned a handsome 11.5% for the year. One year ago we wrote: “Of course the recent Rand rally has been due to the late-December ANC presidential victory by Cyril Ramaphosa. If currencies are anything like shares one might “buy the rumour, sell the fact..”

Since our founding in 2005 our story has been, and remains: All currencies will do poorly in the long run, and the Rand will do much worse than the leading currencies. Gold is the great currency hedge.

The US is caught between a rock and a hard place.

In dealing with the Global Financial Crisis of 2008, the US Federal Reserve took interest rates down to, effectively, zero. A Fed Funds Rate of 0% is a dangerous place to be, and the Fed has been cautiously
raising the rate for the last 3 years. See chart below. 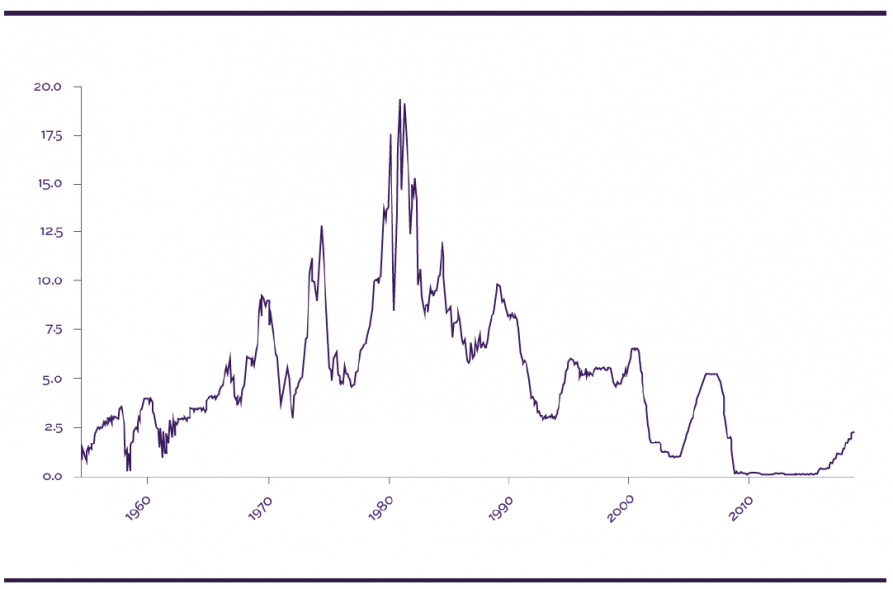 Two thousand years of economic history has taught us that interest rates should be 3% real. This means that the Fed Funds Rate should be (the inflation rate) + 3%. This formula is extremely simplified, and the
full picture is extremely complicated, but in simple terms – borrowers should feel real costs for borrowing, and lenders should be rewarded for lending, and secondly, the Fed should have some firepower to deal
with big economic downturns, and that means having the capacity to lower rates really substantially.

A Fed Funds Rate at 0% gave the Fed no ammunition to deal with a new adverse situation. As a result, the Fed has been anxious to raise rates. But, there’s a ‘but”.

The US economic recovery in the last ten years has mostly been due to monetary stimulus (cutting of interest rates, quantitative easing, etc) from the Fed and fiscal stimulus (cutting of taxes etc) from Congress and Treasury. Now, although the US economy has recovered to some extent, the Fed would like to raise rates BUT it runs the risk of damaging a still-fragile recovery.

In our previous quarterly report we focused on liquidity and warned of the risks of tightening global liquidity. We wrote: “Global liquidity is shrinking fast and tightening is becoming the new flavor in town”. Based on its latest two-week reporting, the St Louis Fed’s Adjusted Monetary Base plunged year-to-year by -11.9%. This would rank as the third most extreme downside plunge since 1930. And in the face of this the FOMC has continued to tighten domestic liquidity at an intensifying pace.

Federal Reserve tightening has impaired consumer liquidity, with heavily negative impact on consumer-driven areas of the US economy including motor vehicle and retail sales, residential construction, home
sales and construction spending. The US economy is far from robust and one can easily discern the seeds of the next recession in these deteriorating economic forces. When banking-system liquidity is squeezed
anew, the faltering economy will push the Fed into reversing tightening policies and that will set off mayhem for the Dollar and for financial markets.

In addition to the ongoing disaster that is Fed tightening, the US faces extraordinary macro challenges.

An authoritarian and profligate president and a supine government are running uncontained and unsustainable fiscal deficits that are exploding the national debt. The US had no national debt in 1835. Since then it has been on an upward path. In the two years of Trumps presidency, the National Debt has risen from $19.9 trillion by another $2 trillion. National debt blow-out has significant implications for the Dollar and the knock-on effects from a weakened currency are profound.

Political instabilities in the US and among its major trading partners and allies are exploding. The US president is either a Russian asset or is doing an impressive job of imitating one. Trump has done significant damage to NATO and Europe, while strengthening and emboldening Russia. While the Special Counsel Investigation draws ever closer to the President and his family members, we become ever-more sure of our predictions as in our note of 18 May 2017 (In the magazine section of www.sabullion.co.za):

“We are sure that the Special Counsel investigation will reveal many crimes. Already there is much prima facie evidence of crimes committed by Trump Campaign Chairman Paul Manafort and Trump’s National Security Advisor General Michael Flynn. We anticipate unlawful Russian business between Trump, Commerce Secretary Ross and others. The circumstantial evidence is substantial and the attempted cover-ups are even more telling. We expect an obstruction of justice criminal indictment against Trump and/or associates.”

“We expect a period of immense turmoil as Trump rapidly loses his public political-capital and support from his own party in Congress. We expect him to become ever-more combative …”

In 2019 watch out for weakness and instability in the US Dollar. The Dollar and gold serve as the canaries in the coal mine for stock markets and global currencies!

Our fledgling retail business that commenced operations in July last year has been a spectacular success under the guidance of Imran O’Brien. We have been in the business of providing a gold custody service since our founding in 2005, and for much of the time since 2005 we have wished to offer a gold retail service where the client who wishes to purchase Krugerrands outright can have them delivered immediately. This necessitated another set of approvals for us. In six months of operation we have done approximately R150 million in sales. Imran is presently refining our operations on the buy-side where we purchase Krugerrands from the public and so act as a market-maker. We have aspirations for a high quality, high-volume service on the buy-side, just as we now have on the sell-side.

I am delighted to report that following corporate restructuring and reorganization in the last three months, the company’s four directors have become co-equal owners in the business and their interests’ are perfectly aligned. This is something of the fulfilment of a ten-year dream for Imran, Clint, Helen and I, and we couldn’t be more proud in our own small way.