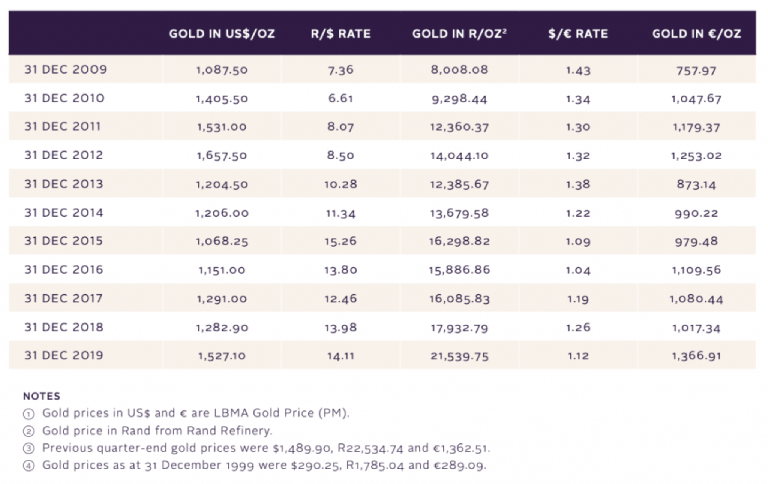 Gold had a strong last quarter of 2019 in US Dollar, posting appreciation of 2.5%. Due to significant Rand strengthening in the quarter, Rand Gold performance was negative at -4.4%.

The norm is that countries have debt. Countries (really their governments) have generally borrowed from the public. This happens as parties get into power and then arrange for their governments to make public borrowings so as to fund their pet projects.

The budget deficit this fiscal year will exceed $1 trillion (repeat: this in good economic times). During Trump’s tenure, us national debt has gone from $19.9 trillion to $23.2 trillion. With an economy (gdp) worth $21.7 trillion, this means that national debt is significantly greater than the size of the economy. National debt now equates to $70,100 per American citizen. National debt per taxpayer weighs in at $187,400. These numbers are staggering and a reasonable person would have expected that the debt picture would have dramatically improved during these last three years, given us and global economic performance.

The takeaway from the information above is that the political will to improve America’s debt standing does not exist. If Trump wins a second term it is likely to deteriorate a lot further. If democrats emerge as winners in November, the debt picture is similarly likely to deteriorate a lot further. In any event we expect America to continue racking up debts at an ever-increasing pace. We also expect the dollar to continue to lose ground as it has since the us currency was established in 1913, and more to the point, as it has since the us currency went off the gold standard in 1971.

IMPEACHMENT OF THE PRESIDENT

On 18 December 2019 Donald J Trump became the 3rd United States of America president to be impeached since the office commenced on 30 April 1789. In the history of humankind trump is the 16th president in the world to ever gain this notorious status.

“So what?” you might ask. As perpetual students of Gold, the Dollar and the US and their linkages, we see important issues and although they are matters of high-speculation, we see it as our job to bring these matters to your attention. But first, some context.

SIMPLISTICALLY, HOW DOES IMPEACHMENT OF THE PRESIDENT WORK IN THE US?

SIMPLISTICALLY, WHAT ARE THE DONALD TRUMP ARTICLES OF IMPEACHMENT?

In term of the US Constitution, Trump has been impeached by the house for ‘high crimes and misdemeanors’. Article 1 is abuse of power and article 2 is obstruction of congress. In essence, trump has been found guilty of extorting a foreign government (Ukraine) to meddle in the forthcoming us presidential election for his personal benefit. Furthermore, trump has been found guilty of a cover-up and of instructing his officials to defy lawful subpoenas from a congressional inquiry into the matter. Source: h. Res.755 on https://congress.Gov

SIMPLISTICALLY, HOW HAS THE IMPEACHMENT PROCESS BEEN WORKING AND HOW WILL IT CONCLUDE?

First off, one must understand that the us is not a true democracy with a one-man one-vote system. The house represents the people, while the senate represents the land. Let me explain…

The house is made up of a fixed number of 435 elected representatives. Through a complex system using the 10-yearly national population census as a basis, each representative currently represents a congressional district (or voting constituency) that is home to approximately 747,000 citizens.

The senate is made up of a fixed number of 100 senators. Each State of America (there are 50) is accorded two senators. The senators therefore, represent “the land” or more precisely, the states. This means that the vast, numerous and under- populated states of the interior (like Wyoming and Montana), have as much power in the senate as do the behemoths of California, Texas and New York.

The us has two major political parties – the democratic party and the republican party. The majority of Americans live on the two narrow belts of the east coast and the west coast. These people mostly vote democrat. The minority of Americans live in the vast hinterland. These people mostly vote republican. For these reasons (simplistically), the house is controlled by democrats and the senate is controlled by republicans. And of course Donald Trump is a Republican. The leading republican senators have indicated that they have no intentions of impartiality or conscience in the trump trial, and one can conclude therefore that the likely outcome is that trump will not be removed from office irrespective of his guilt and complicity.

But you never know…It is possible that new, even more damning things could come to light that makes it impossible for some republican senators to shamelessly protect their president; and it may turn out that the president not only abused his power but also broke the law.

Financial markets expect Trump to be acquitted and so one would expect that there would be little to no immediate effect on stock-markets, bond markets, currencies and gold.

For the rest of 2020 Trump would probably be emboldened and more manic than he has been thus far and one could assume that he will reward his protectors, torment his opponents, pardon his criminally-convicted accomplices, vilify the media, strong-arm weak countries for benefit, demand fealty and subservience like an emperor, oppress state institutions, bully congress to pass further tax cuts for the rich and increase his record budget deficits. This translates into ‘good for assets where the rich are invested’, poor for the dollar, heightened stockmarket risks, and heightened geo-political risks. These events are likely to be good for gold as a hedge against a depreciating dollar and as a safe haven in an increasingly dangerous Trump-led world.

In the US Presidential election set for 3 November 2020, Trump would probably find improved odds of re-election and might well win a second term.

If Trump wins a second term in November, for the ensuing four years expect all of the above, but greatly amplified. We would fasten our seat belts with high gold exposure.

In the unlikely event that Trump were removed from office then Vice-President Mike Pence would be installed as President. If this came to pass, then it is entirely possible that pence would be impeached for his complicity in this Ukraine affair. Then the Speaker of the House – Nancy Pelosi – would become President. In either scenario it is likely that matters would be calmer until the November elections with a caretaker President and it would then be likely that the democratic party would perform well in the elections – perhaps even winning the house, the senate and the presidency.

If this scenario came to pass, one could expect greater fiscal prudence, softer foreign relations, more multilateral ‘globalism’, more independence of the fed, increasing of tax rates for the rich and corporations, and generally a return to more normalcy. This translates into rising personal and corporate taxes, shrinking budget deficits, rising interest rates and deflating financial markets that have been “juiced-up” by Trump. This scenario would also likely be good for gold as capital flees falling equities and enters into gold as a safe haven asset.

It was with great sadness that we learned of the death of Allan W.B. Gray on 10 November 2019. In 1974 Allan Established Allan Gray Investment Counsel, and this enterprise has blossomed into South Africa’s largest privately-owned investment management business today.

At SA Bullion we owe a great deal to Allan. Much of our SA Bullion value system and core beliefs owe their origins to this great man and mentor. On a personal level a significant part of my career development occurred under the wise direction of Allan. When I resigned as a director from Allan Gray and set out on a new course, it was with admiration and deep- affection for Allan and his family. Allan’s success lay not only in the tremendous business empire that he built, but also in the successful investment businesses that were spawned by people who ‘grew up’ in Allan’s fold – businesses like oasis asset management, element investment managers, and, we would like to think, SA Bullion management.

At the start of this new-year and new decade we have some exciting new developments to report.

We have commenced with a new line of business that buys and sells secondary market (I.E. Pre-owned) Krugerrands, of all denominations. To operate this area of business we have recruited an experienced goldsmith from a precious metals refinery. We are delighted to welcome Nathan Cloete to the team. In the month that Nathan has been with SA Bullion he has already made a significant contribution and we look forward to a thriving market-making business under his direction.

Our offices at the Old Castle Brewery in Woodstock, Cape Town, have served us well for approximately 10 years. But for the best reasons we have outgrown them. And so I am happy to announce that on 1 march we are relocating to a magnificent new office development in upper Woodstock called Brickfield Canvas. To see something of this wonderful development go to https://brickfieldcanvas.Com. We expect to have photographs uploaded to our blog soon. This move will provide us with double the office space that we currently have, it will give us ample parking space, and the development comes with a huge standby generator to address loadshedding agonies. Furthermore, Brickfield Canvas offers us convention facilities, a coffee bar, a gym and great access from major road networks. We look forward to hosting you in our new offices soon!