The SA Bullion Gold Report Fourth Quarter 2021   Analyst: Hilton Davies Date: 10 January 2021 GOLD PRICE ACTION   Gold in Dollar had a strong Fourth Quarter of 2021 notwithstanding a spike and reversal in mid-November. Due to Rand weakness in the quarter, Gold in Rand performed very strongly at 7.6%.  Gold had … Continued 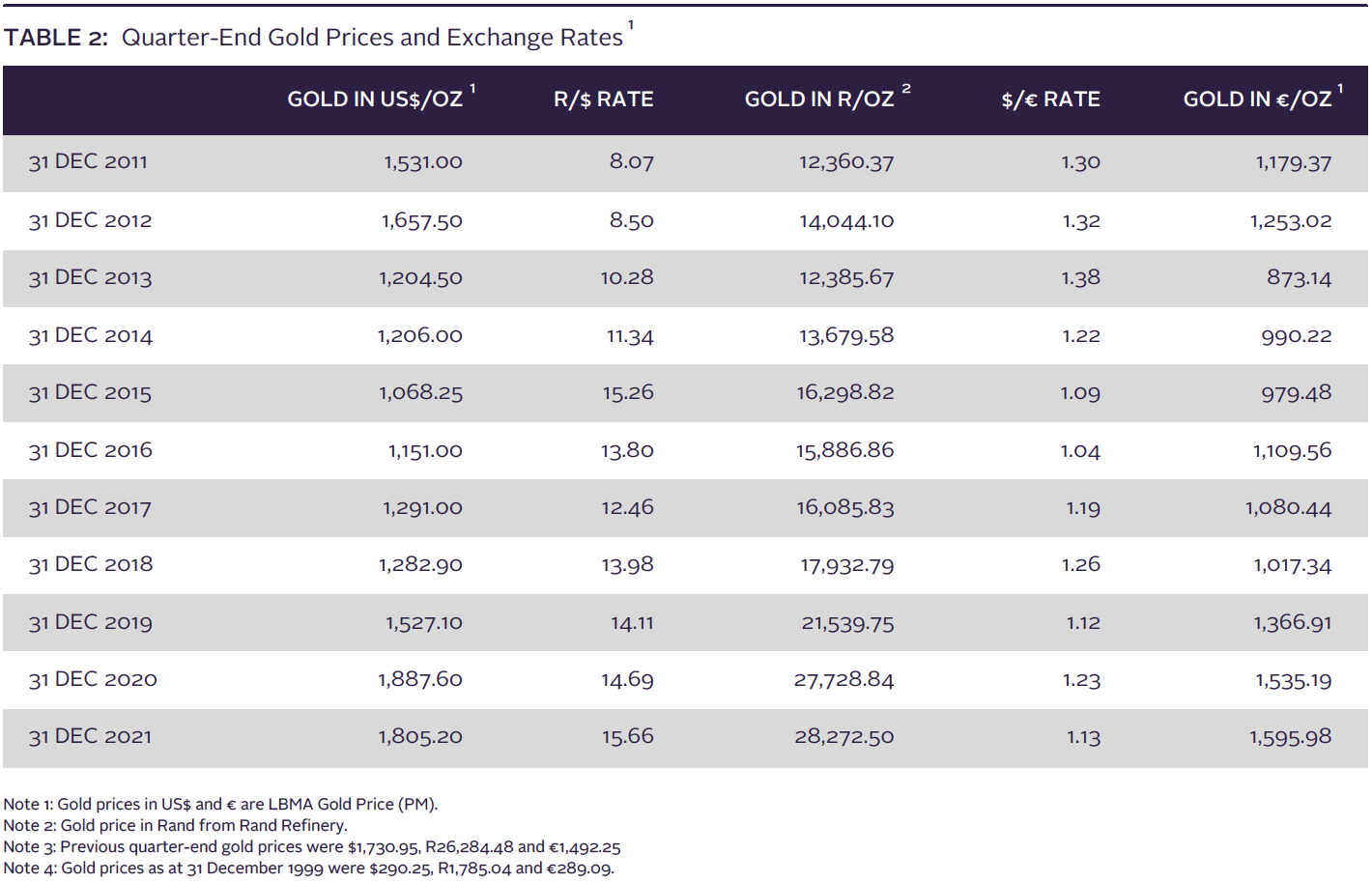 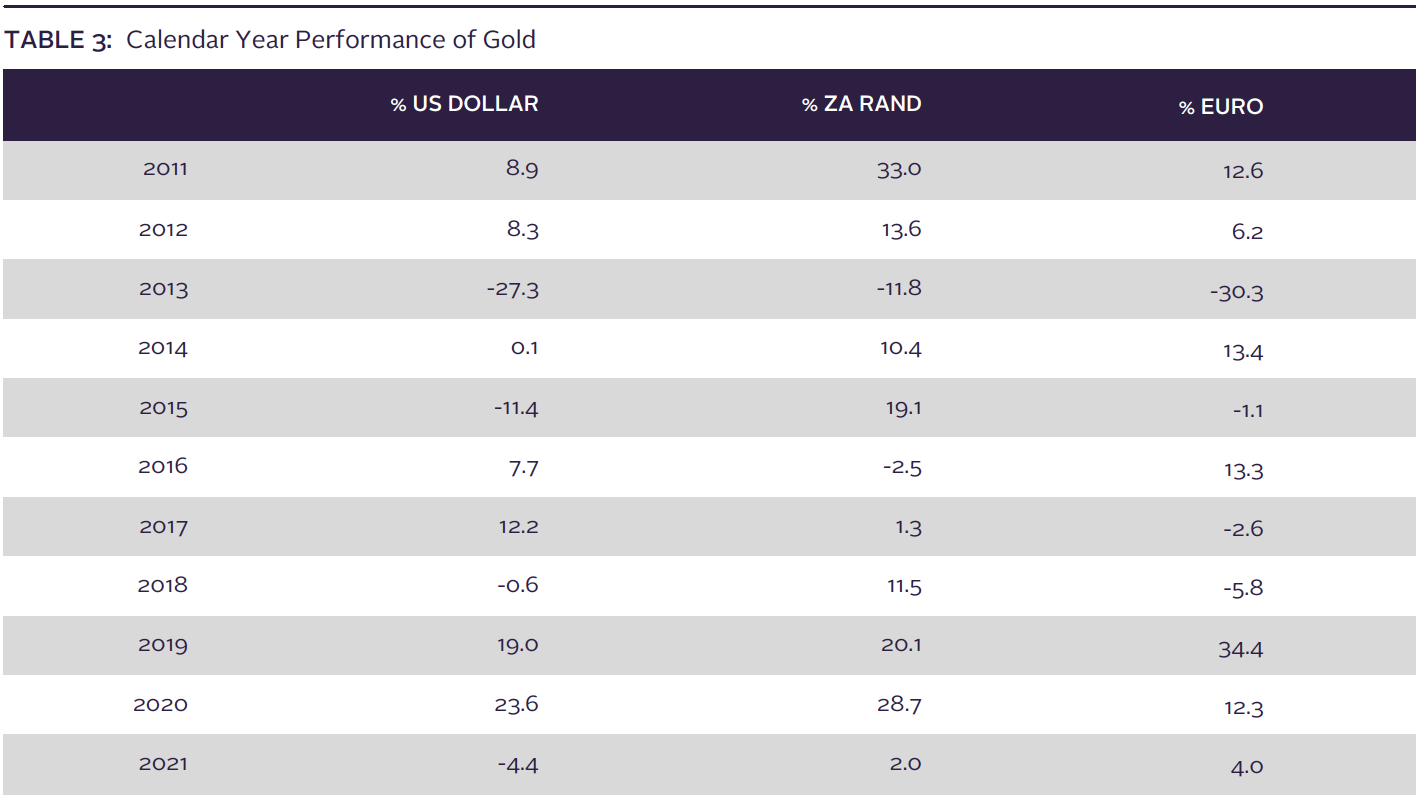 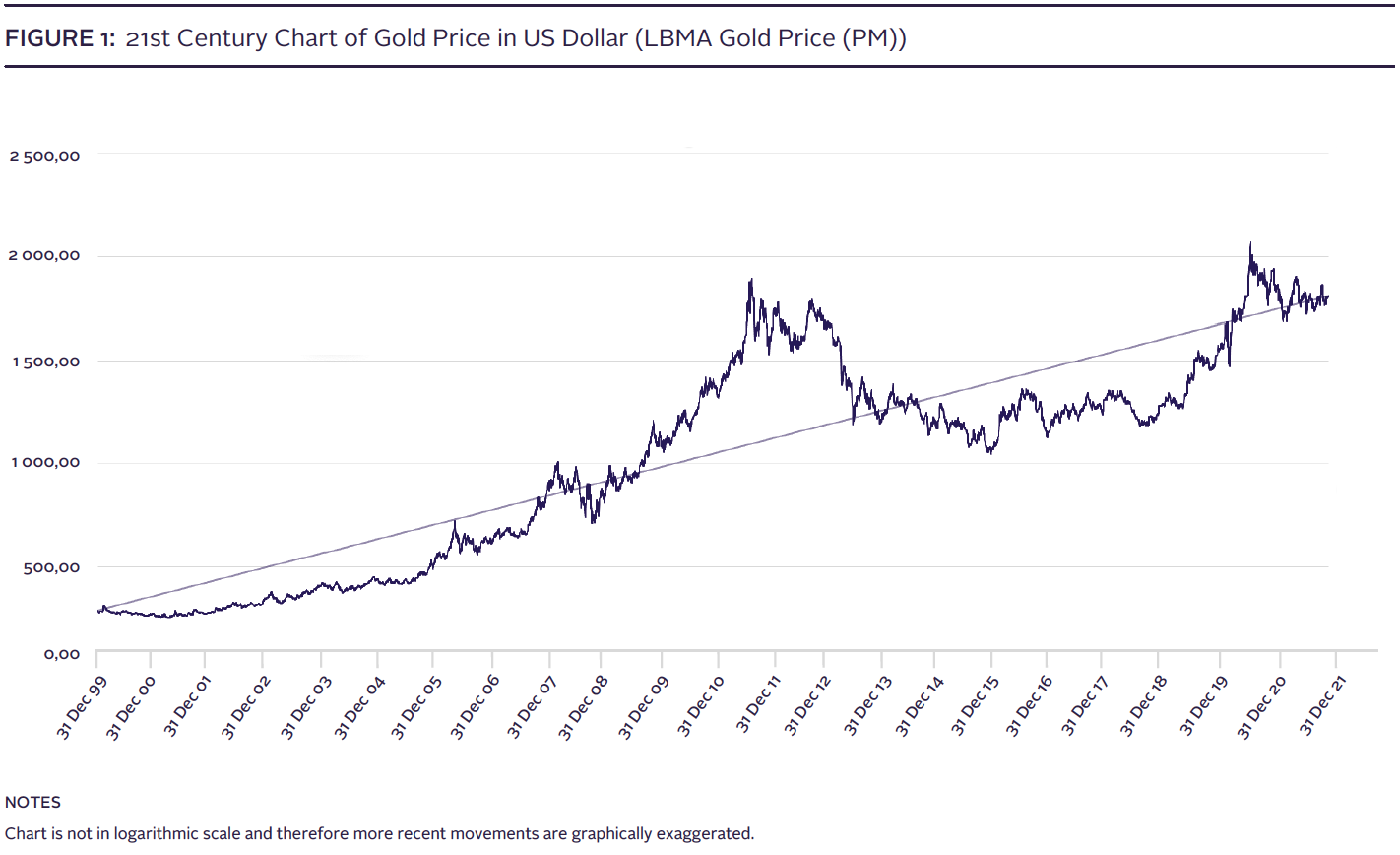 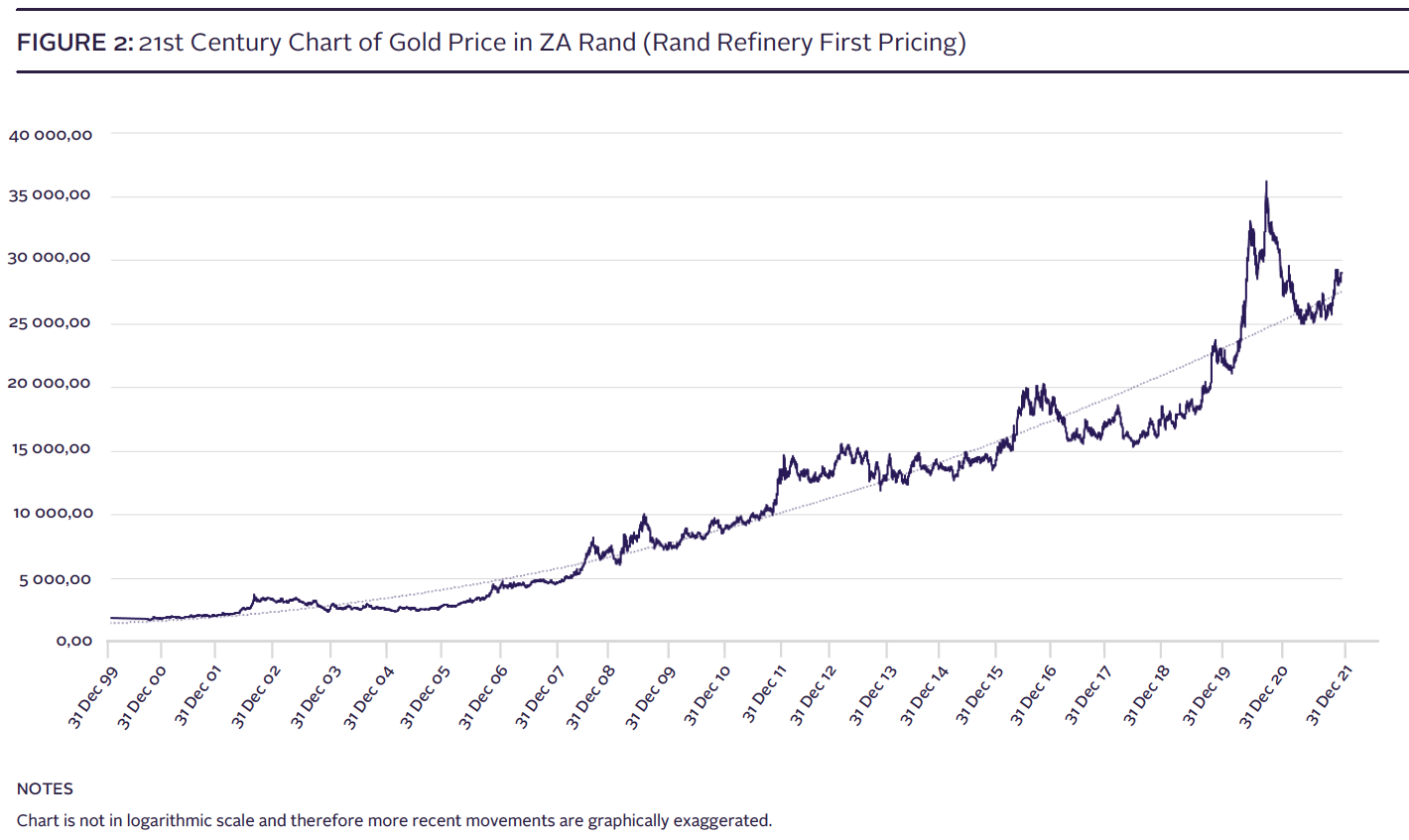 Gold in Dollar had a strong Fourth Quarter of 2021 notwithstanding a spike and reversal in mid-November. Due to Rand weakness in the quarter, Gold in Rand performed very strongly at 7.6%.

A FORWARD VIEW OF INVESTMENT MARKETS

Stockmarkets are communicating that inflation is not a risk and that if anything, inflation rates will fall. Should stockmarkets be right, then one could reasonably assume that interest rates are likely to remain at the current extremely low levels and thereby remain highly supportive of the extremely high level of stockmarkets.

Companies have been able to pass on sharp increases in prices as supply-chain factors have caused demand to outpace supply while the global economy has been re-opening. When all the numbers have been collated for 2021, we expect that company earnings growth for the year will come in at record numbers.

Notwithstanding the above, we are not convinced that stockmarkets are right about 2022.

Inflation is taking off worldwide. Commodity prices have been rising strongly and wage growth has been strong.

Interest rates (or bond yields) have not been this low in hundreds of years and are generally zero or around zero in real (inflation-adjusted) terms. A simple process of normalization and of re-arming the Federal Reserve/central banks with some interest rate “powder”, means rising rates in our future. And of course rising inflation puts further upward pressure on interest rates.

Through the Covid-19 pandemic governments have been generous to the extreme with free money and the money supply has exploded. We seem likely to move into a post-Covid world in 2022 and we therefore do not expect continued loose money to gush through into consumer spending and thereby to support corporate profit growth.

Almost all of the market moving performance of the FTSE World Index in 2021 came from just five stocks: Apple, Microsoft, Amazon, Google and Tesla. This tech sector is looking decidedly reminiscent of early 2000. Techs are frothy to say the least. And they are over-owned.

Bond markets look appalling. With interest rates essentially around zero, there is little reason to believe that bonds offer upside. The downside risks on the other hand, in the face of rising rates, look ominous. And property is essentially another version of a 40-year bond.

No doubt some equities will do very well irrespective, but these are not likely to be today’s darlings. Passive funds are likely to do very poorly as these are heavily weighted towards today’s favourites that dominate the indices, particularly the previously mentioned five stocks plus Meta Platforms (Facebook).

Whilst we do not foresee rapidly rising rates, and in fact we see rates being kept low for decades to come, we do expect some upward movement in rates, and some general tightening.

One might expect that rising interest rates and strengthening first-world currencies would be poor for gold, but historically gold has shown its best performance in such environments. This is due to its safe-haven appeal in times of difficult markets and due to its uncorrelated nature.

THE WORLD WE LIVE IN

For almost 30 years China has been the furiously beating heart of the world’s economy. This picture is now changing and the powerhouse is moderating. The country is also confronting some significant issues, not least of which is the potential collapse of China Evergrande Group.

Russia is a small player in the world’s economy. The Gross Domestic Product of the country is smaller than that of New York City. But Russia, as driven by its dictator Vladimir Putin, plays an outsized role in global affairs. Putin presently has Europe, NATO and the US having to pay him much attention as he threatens to invade Ukraine with the 100,000 troops that he has amassed on that country’s border. An invasion would have massive global implications in every conceivable way.

The US has mid-term elections coming up in November. In these elections it is highly likely that the ruling Democratic Party will lose control of the Senate and maybe the House as well. Such losses would put the brakes on the Biden administration spending plans and have an impact on economic growth, inflation and interest rates. On the political front things are going to get interesting as indictments and criminal prosecutions related to the January 6 Insurrection flow through. It is not entirely inconceivable that leading Trump administration figures could be prosecuted and even jailed, and although the Department of Justice would be very reluctant to go after a former president, it might find no alternative to prosecuting Trump for seditious conspiracy or some similar charge. The implications would be significant.

Your gold investment manager and precious metals dealer has big plans for 2022. For many years the firm has been developing as a FinTech company. The company has heavily and persistently invested in technology to enhance and automate the financial services that we deliver.

The past year has seen us take massive steps in database development, as driven by Technology Director Helen Davies. Operational staff have realized efficiencies that have resulted in improved customer support and customer satisfaction. The Dealing Team has realized better inventory management and customer invoicing, and the Finance Team has realized better management accounting and forecasting. Helen has done a wonderful job and this firm is lucky to have her!

We are presently producing explainer videos for our various products and services. These small videos are quick and easy to consume and will be easily distributed by email and Whatsapp and will make use of links to our library of videos on YouTube.

Our secure Online Shop (sabullion.co.za/shop/) has received considerable development and attention this past year. In conjunction with our hedging programme run by Absa Bank, this unit has become quite a powerhouse in our firm.

In this year ahead we intend to roll out our first app. Across our business we have embraced the modern usage of smartphones and we have big aspirations in this area.

Most exciting of all, we have spent two years developing a new service that will complement our present offerings. We expect that our existing gold facility clients will be delighted as we leverage our “bullion bank” role for them, and additionally, we will have something of great interest and value for family and friends. We expect to do a big release this month!

Thank you for your patronage in 2021. We wish you a much better post-Covid year ahead.