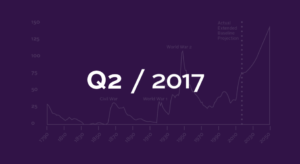 Note 1: Gold prices in US$ and € are LBMA PM Fixes.
Note 2: Gold price in Rand from Rand Refinery. 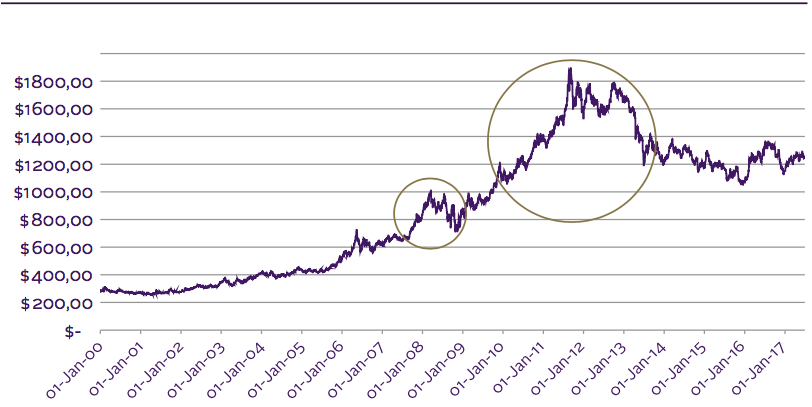 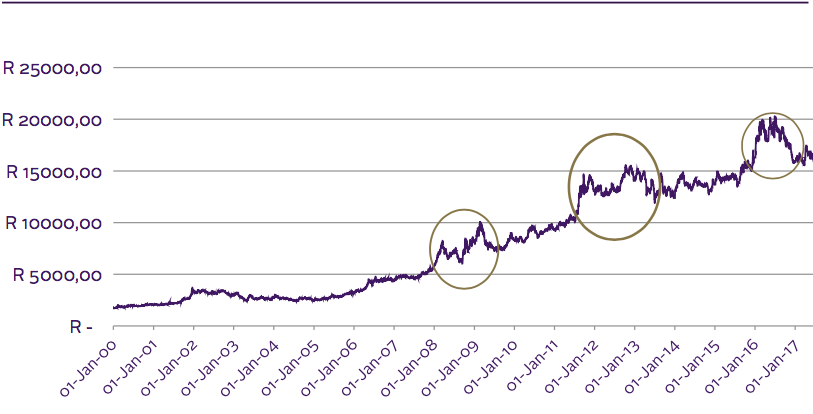 Following a brief rise in early April, Dollar Gold (gold priced in US Dollars) has mostly had a slightly declining quarter. The US Federal Reserve, as expected, raised the Fed Funds Rate on 14 June to a target range of 1.00 to 1.25%. This had the effect of raising real interest rates in an environment of slowing, and below-target inflation and poor economic figures. This action of tightening monetary policy in a weak environment is negative for Dollar Gold. Our reading of the situation is that the Federal Reserve is anxiously attempting to build some monetary policy cushion for what could be difficult times ahead. Adding to Fed actions, Europe has seen reduced political risks recently, with a corresponding reduction in demand for safe haven assets, including gold.

For the last four years the Dollar gold price has been bouncing around in the $1,150 to $1,350 range, with a mid-point of around $1,250. The extent of this base alone gives one a fairly high degree of reassurance in terms of price support for the future.

Aside from the Financial Crisis boom and bust, the other noticeable, but smaller, boom and bust this century occurred in the year prior to the Financial Crisis kicking off. The gold price responded positively to the rapidly deteriorating sub-prime mortgage business but then when Lehman Brothers went bankrupt, there was a flight from all assets to US Treasuries. In this instance the gold price declined along with stock markets and other financial assets.

Short term aberrations are very interesting to us, but of far greater interest are the long term trends. The long term historical picture of Dollar Gold above, is supportive of our positive long term outlook for gold.

In Rand the picture is quite different from that of Dollar. In the last year we have seen a massive decline in the Rand gold price from a high of R20,300 to R16,180 as at 30 June. This 18% decline in price does not correspond to the Dollar price movement. In fact if we go back to just more than a year ago, we see that on 6 June 2016 the Dollar price was the same as that at end – June 2017. The reason for the discrepancy between Dollar Gold and Rand Gold is attributable to the huge rise in the Rand versus the Dollar. The Rand appreciated against the US unit by 13% from end – June 2016 to end-June 2017, and by more if one uses slightly different start – and end – dates.

This rise in the Rand was not a function of positives for South Africa. It was a function of the risk-on trade worldwide. Investors globally, developed an appetite for emerging market currencies and the South African currency benefitted from the overall trend. In the prior year the Rand had suffered, not from a global trend, but from self – inflicted damage – most notably the firing of the trustworthy and competent Finance Minister Mr Nhlanhla Nene.

The long term picture of Rand Gold indicates the present time to be very attractive as an entry point. The Rand Gold price has had a recent boom-and-bust (Nene/Emerging Currencies) and the long term upward trending support slope has been regained.

Taken together, and without suggesting that anything is guaranteed, the Dollar Gold chart presently indicates tremendous support and the Rand Gold chart indicates rising Rand Gold.

“The future’s so bright, I gotta wear shades” was the name of a hit song in the 1980s. Today one would have to substitute “bright” with “uncertain”.

What makes the economic environment so uncertain today is that we have no past experience and lessons to rely on. The situation today is unique and economic studies indicate quite different potential outcomes.

So what are the conditions that make the situation unique today? These conditions can be summarized as:

This is an unusual mix of ingredients, let alone that they are so extreme.

As always, we focus on the Dollar, as gold is priced in Dollar, and the US, as the strength of the Dollar is a function of economic and political factors affecting the United States.

The key problem with a high level of Gross National Debt (GND) is that it consumes an inordinate amount of state resources for servicing and paying down (if at all possible). And the problem with this is that it leaves less money available for spending in the areas where it is most needed – education; and innovation, in order to keep the wheels of productivity turning and to maintain competitive advantage.

The original thinking of Milton Friedman was that in tough times stimulatory budgets could lead to the build-up of National Debt that would then be worked off in good times. It hasn’t worked out this way, as debt is seldom, if ever, worked off. Now in the case of the US today, with GND:GDP in excess of 100%, debt is crowding out investment in the future. To add to the woes of the US it has a rapidly aging population and globalization ensures that manufacturing migrates away from the US to cheaper and more efficient production zones.

The problems of high levels of Private Sector Debt correspond to that of National Debt, but in addition, already extremely high levels of debt in the Private Sector means vulnerabilities in the event of a downturn; and limited ability to absorb more debt when the Fed might desperately attempt monetary stimulation to stave off recession or deflation.

US Monetary Policy (predominantly interest rates and quantitative easing) and Fiscal Policy (predominantly tax cuts) have been unprecedented in their extremeness since the 2008 Financial Crisis. The objective of the Fed and the Treasury has been to stimulate the Wealth Effect (as explained in our Fourth Quarter 2012 report that can be found in the Library on www.sabullion.co.za). The notable success of this stimulation has been to drive stockmarkets to record highs, and in this way fix the insolvency issues that were affecting the banking sector, and less importantly, private people. The banks and the rich have done very well, but there remains a tremendous reliance on what can only be described as over-valued stockmarkets. A big retreat would have massive implications, and the risks of such are not negligible.

The Fed Funds Rate peaked in June 1981 at 19.1% (yes, that’s correct! Over nineteen percent!). Subsequently the rate has been on a long rollercoaster decline since then and 30 years later, in July 2011, it reached 0.07% (essentially zero percent!).

For the first time in nine years, at the end of June 2017, the Fed Funds Rate went back above 1%. This staggering period of negative real interest rates would normally have set off a credit expansion explosion and a concomitant economic boom. But the response of the economy has been to stagger and totter forward, perpetually threatening to go into contraction and recession.

The Fed Funds Rate is a critically important arrow in the quiver of the monetary authority. A primary objective of the Fed is to tamp down boom times and to provide support in times of bust. In other words the Fed attempts to flatten the highly cyclical economic cycles. Now in order to exercise this role, the Fed has to have interest rates that it can cut. To escape a recession the Fed has to rapidly cut rates by 3 to 4% in normal times. In times such as the present with sky-high debt levels and the extreme vulnerabilities of all-time high stocks, the Fed would have to cut rates by 5 to 6%. Rates are at 1%. The Fed may reach for an arrow but the quiver is all but empty.

The risk of deflation would appear to be a thing of the past. The Fed has wished for inflation and their wish has materialized, but with very unconvincing low levels of inflation that has seemed unable to gain traction. The principle reason for inflation not taking off (when one might have expected Quantitative Easing to set off an explosion of inflation) is that aggregate demand has been poor, and aggregate demand has been poor because wage growth has been poor and wage growth has been poor because employment has been poor. This has largely come to an end now with the economy at close to ‘full employment’. The Fed now lives with a dilemma. Do they raise rates to combat what could suddenly become high inflation or even hyperinflation (given the extraordinary levels of monetary expansion), but at the same time potentially risk causing a stockmarket shock which could cause the economy to backslide into recession?

The Fed cannot risk raising rates to a level that might imperil stock prices. They will look to a very gradual upward trend and keep their fingers crossed that economic growth and inflation follow interest rates up and that stockmarkets don’t react negatively. The Fed has to raise rates. They need to build up that monetary cushion to deal with the next recession.

In the immediate short term it is likely that we will see a risk-off phase that is gold supportive until there is some empirical data that might support the recent actions of the Fed in raising rates. Looking into the distance, we see rates rising, but very slowly, and being low for long. We see economic growth being low for long. We see inflation rising slowly for some time and then rising fast as the velocity of money improves eventually. All of this would spell good news for the gold price in the long term. And it’s hard to imagine that one will get it much cheaper than the present.