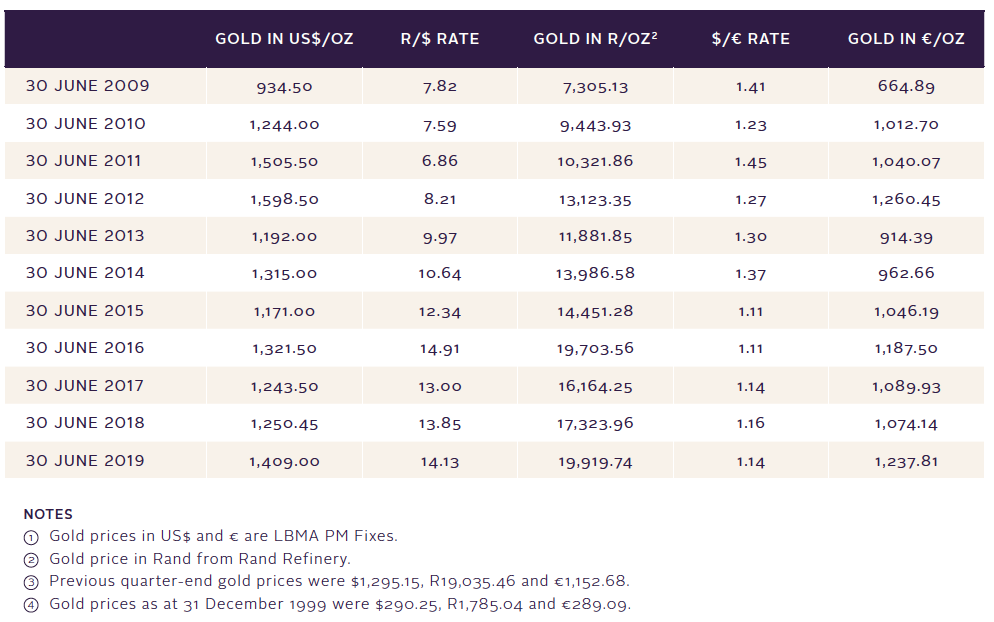 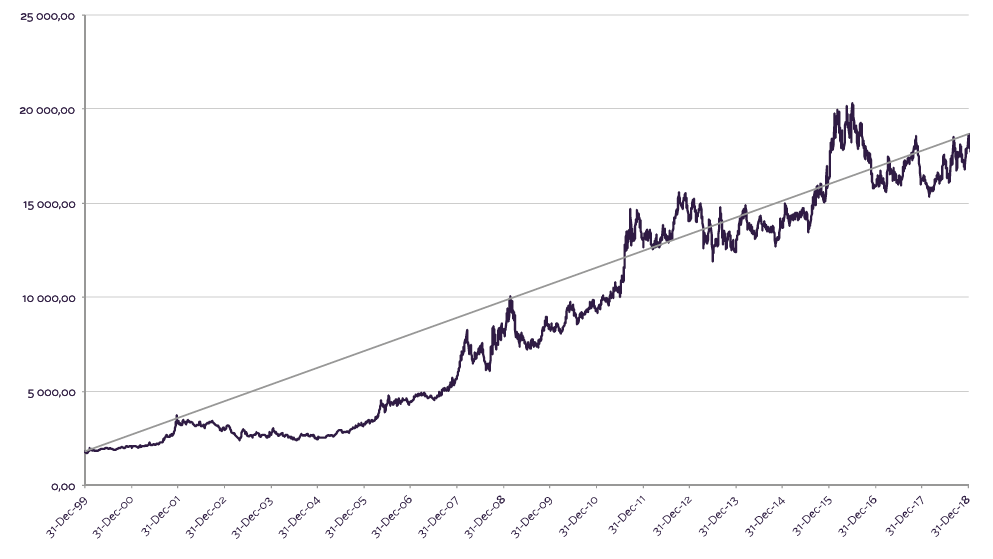 In all currencies gold had a very good quarter. In South African Rand, gold was up 4.7%. While still very strong performance,this number is a fair bit lower than the Dollar number due to the Rand strengthening against the Dollar during the quarter. In Euro gold was up 7.4%. Gold performance over twelve months to 30 June was exceptionally strong. In US Dollar, gold appreciated 12.7%, in SA Rand, gold was up 15% and in Euro gold rose by 15.2%. In the 19½ years of this century gold rewarded the long term investor with excellent price appreciation. In the two big currencies gold has delivered over 13% annualized. These hard currency performances which are way in excess of inflation indicate structural weakening of the major currencies. Rand-gold performance begins with Dollar performance and thenoverlays Rand weakening. The numbers indicate that the Rand has deteriorated against the Dollar by around 5% per annum.

In the United States of America under the presidency of Donald Trump today the rich are doing fabulously, but the president wants them to do a whole lot better. Meanwhile, the middle class are doing poorly and are threatening to take the US into recession. For the rich to do even better the president would like to see interest rates being slashed. This would have the effect of share prices going to new record highs. The president has other reasons that talk to his desire for lower interest rates, and these will be discussed in the Medium Term and Long Term sections below. The United States Federal Reserve (the “Fed”) controls short term US interest rates and does its policy setting by way of two-day meetings of the Board of Governors. The next meeting is scheduled for 30-31 July 2019. The Chairman of the Fed has come under enormous pressure in recent months to give Trump the rate cuts that he desires. The pressure and the economic rationale have both been unwarranted, at least until recently. Now the economic rationale for a rate cut is strong. Recently the bond yield curve has inverted (see chart), and there is no greater predictor of future recession than this. We expect that on 31 July we will learn of a US rate cut. Figure 4: Chart of US Government Bond Yields (“Yield Curve”)

Interest rate cuts are generally bad for a currency. Furthermore, generally-speaking, what is bad for the US Dollar is good for gold. We expect that on 31 July the US Fed will announce that US short term interest rates (what is called ‘the Fed Funds Rate’) will be cut by 0.25 – 0.50 percentage points (or 25 to 50 basis points). Such action should be bad for the Dollar (as viewed through international exchange rates) and good for gold. But because there is already a high expectation for such Fed action, the price impacts are not likely to be great. Should there be no cuts, then expect the Dollar to gain strength and gold to lose ground.

President Trump has taken a heavy hand to the major trading partners of the US . From his Day 1 in office he has accused Mexico, China and Europe of unfair trade practices and agreements, to the disadvantage of the US . Trump has threatened and cajoled the leaders of major trading partners and has placed heavy tariffs on goods and services imported from these countries.

Trump’s objective with his trade tariffs has been to lessen the attractiveness of the imported goods and services by making them much more expensive to Americans.

The Law of Unintended Consequences once again stepped in and altered the landscape in unexpected ways. The countries that were on the receiving end of the Trump Tariffs experienced currency weakness, to the extent that their weakened currencies made their exports, with Trump Tariffs layered on top, competitive once again. The tariffs have been largely nullified.

This currency weakness in what Trump sees as opponents, not partners, has angered Trump and he has taken steps. Firstly, he has threatened those countries and ordered their leaders to take steps to strengthen their currencies. Secondly, and rather ominously, he has insisted on new clauses in trade deals that force countries to support their currencies. Thirdly, he is looking at direct market intervention to weaken the Dollar.

The upshot of all this is that for the balance of his first term in office, and for as long as Trump is president of the US , one should expect a tilt towards Dollar weakness. And of course generally speaking, what is bad for the Dollar is good for gold.

The Dollar has had a tremendous bull run for eight years and that bull is starting to look a little weary.

While Barak Obama was US President he was routinely lambasted by private citizen Trump for running budget deficits and adding to the national debt. But it is worth remembering that Obama entered office at the time of the Financial Crisis and massive state expenditure was essential at the same time that tax revenues were plunging.

Over time Obama’s administration fixed the economic mess that they had inherited and they worked the budget deficit down to low levels by the time Obama ended his second term. Trump inherited a fixed economy with lots of growth aahead, and he inherited a national budget that was running a relatively small deficit.

In his three years in office, Trump has taken a chainsaw to government income by slashing tax rates for the rich and for corporations. And Trump has exploded national expenditure, particularly on military spending. Consequently, notwithstanding a relatively good economy, Trump’s budgets have been disastrous for the long term financial health of the US by running huge and ever-increasing deficits.

In the first quarter of 2019 annualised national income amounted to $5,663 billion. Annualised national expenditure was way in excess of income and amounted to $6,998 billion. The budget deficit was an annualized $1,323 billion – or $1.3 trillion! It is projected that in 3 years’ time the cost of servicing the national debt (interest) will exceed the military budget. Most amazing is that this is not in times of war or crisis. These are stable and relatively prosperous times. It is hard to reconcile the actions of Trump with his election promises.

When we set out in 2005 to bring SA Bullion and its offerings to the market, we had a very clear idea as to what it was we were offering South African clients. In offering a physical gold investment service we were offering:

• A risk alternative to banks; and

• An investment alternative to equities, bonds and property.

Since inception, we have been all too aware that we have not been able to offer an important and highly-desired fourth leg to our chair –

I am immensely proud to advise you that we can now offer all four legs to our chair.

Our international clients have the choice of acquiring Krugerrands, Minted Bars or Kilobars, and they have the choice of vaulting those gold products with us in Dubai or Zurich, or taking delivery of them at a destination of their choice. Our gold products are the most trusted gold products in the world, procured from Rand Refinery, and our vaulting is with the American multinational, Brinks, the most trusted vaulting and logistics operator in the world. SA Bullion International is a foreign Global Business Corporation, such that all dealing with Rand Refinery is exempt of Value Added Tax. Our offshore company is headquartered in Mauritius, a country with an excellent reputation in financial services. South African residents will have the benefit of being serviced by our domestic office in Cape Town.

Our offshore offering will get a high-profile national launch in the near future but meanwhile we are delighted to announce this soft launch to you, our valued client. We shall be sending comprehensive product information to you in August.