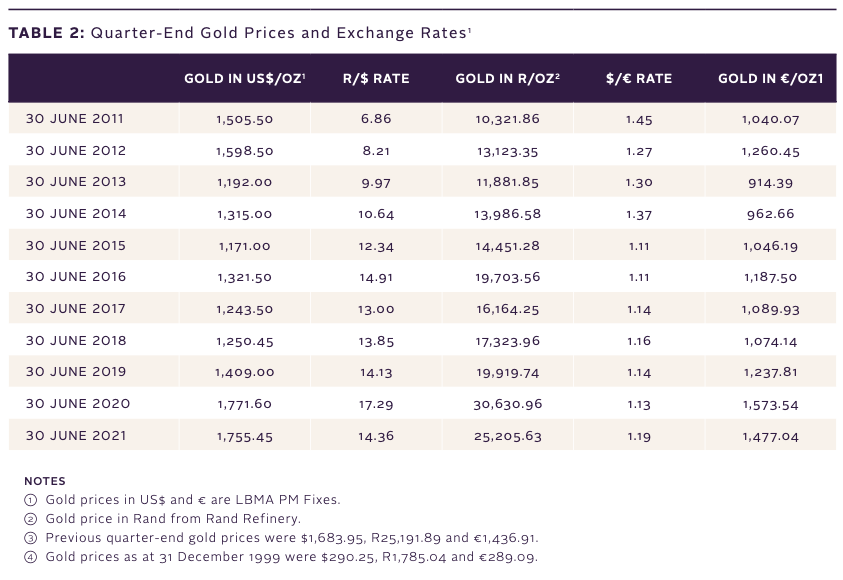 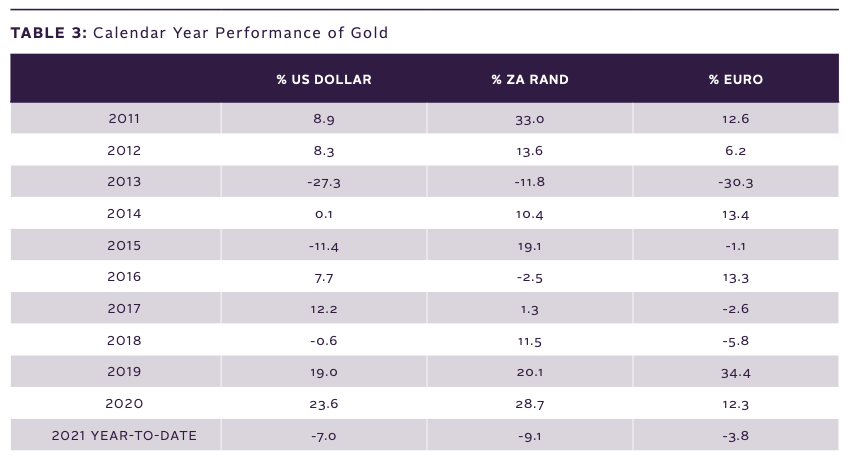 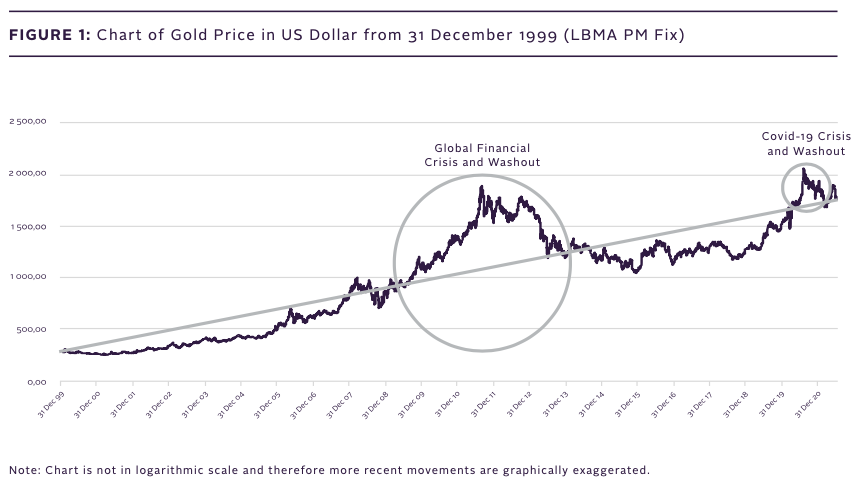 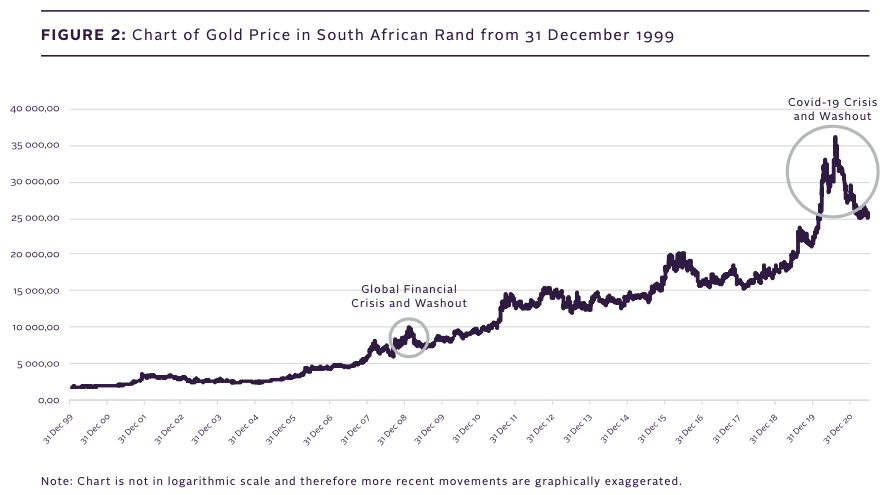 In US Dollar gold had a strong quarter as the price per troy ounce moved up from $1,683.95 to $1,755.45 to post a return of 4.3%. The preceding 9 months however were poor, resulting in a one-year performance result of -0.9%. In the 21½ years since the start of this century, the price appreciation of gold has been an impressive annualized 8.7% per annum in US Dollar.

In South African Rand gold had a flat quarter. Over the last year whereas Dollar-Gold was almost flat, Rand-Gold was dreadful as the Rand strengthened massively so as to chalk up a Rand-Gold result of -17.7%. This century gold has rewarded South African investors with a compound annual return of 13.1% per annum, thus validating the long-term proposition for South Africans.

US NATIONAL BUDGETS, DEFICITS AND DEBT

The US resolved the effects of the Global Financial Crisis by taking enormous financial pain in the years 2011 and 2012. A staggering amount of fiscal stimulus was required for a very damaged financial system that followed years of Federal Reserve and government mismanagement. This financial pain can be seen in Table 4 where tax receipts were massively exceeded by expenditure outlays in the calendar years 2011 and 2012. Also evident in the table is that the financial system and the US economy was on the mend in 2013 and that by 2015 national income and expenditure was stabilized and rapidly improving. As can be seen in Table 2, Dollar-Gold reflected the improving circumstances of the US and of the Dollar. i.e., Dollar-Gold performed poorly.

Commencing in 2017, the Trump presidency and Republican administration inflicted enormous damage on the finances of the United States of America. Their first major act was to slash taxes for the rich which caused Receipts to decline innominal terms (and collapse in real terms). Their second major act was to ramp up spending on military build-up, which caused Outlays to balloon in nominal terms for the next three years (and explode in real terms).

In March 2020, the Covid-19 pandemic took hold and a combination of natural damage and gross leadership mismanagement led to Receipts shrinking and Outlays exploding. In a combination of collapsing tax receipts due to a shutdown economy, and the citizens, businesses and states of the US requiring enormous financial support, the Deficit exceeded the unimaginable figure of $3 trillion for calendar 2020. The finances of the United States of America had not looked so poor since World War Two. Dollar-Gold took off (23.6% for 2020). 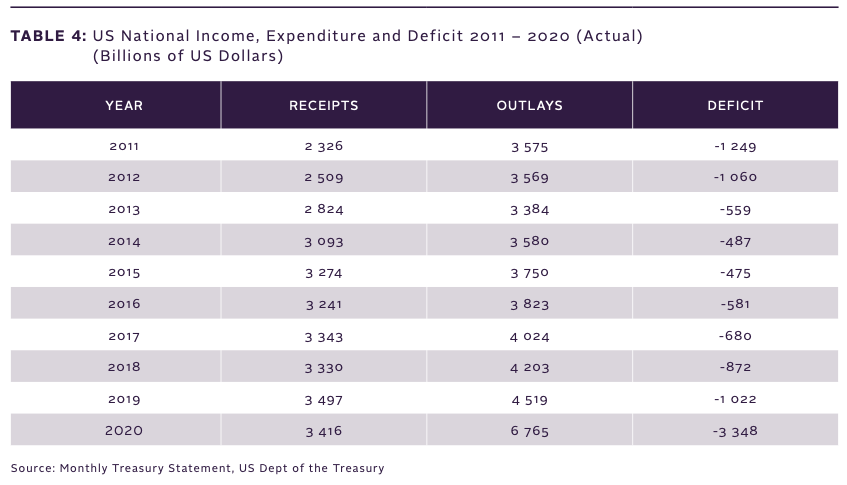 In our Q3 2020 report we wrote about the most likely scenarios that could result from the US elections of November 2020 concerning the Presidency, the Senate, and the House of Representatives. As importantly, we wrote about the headline policy consequences of the scenarios and the follow-through impact on gold. Our first scenario read as follows:

As it happens, the Democrats had outright victories in the Presidency and the House. The Democrats and the Republicans tied in the Senate at 50 seats each, but with a Democratic Vice President as tiebreaker, the Democrats achieved a simple majority in that chamber also.

Six months into the Democrat-controlled government, the above predictions are largely coming to pass. Most importantly to note, the national budget deficit is exploding, and national debt levels are setting records month after month. National finances are parlous and consequently the Dollar has done poorly. As we had predicted, this has been relatively good for Dollar-Gold (4.3% in Q2 2021).

What of the Future?

The non-partisan US Congressional Budget Office applies currently existing laws to economic assumptions to arrive at best guess estimates of incoming Receipts and outgoing Outlays. Using what we believe to be overly optimistic economic growth forecasts, the Office projects truly staggering Deficits for the next ten years. They arrive at improving circumstances in the next two years due to very strong economic growth, and then they project rapidly deteriorating circumstances up to 2031. See Table 5 below. 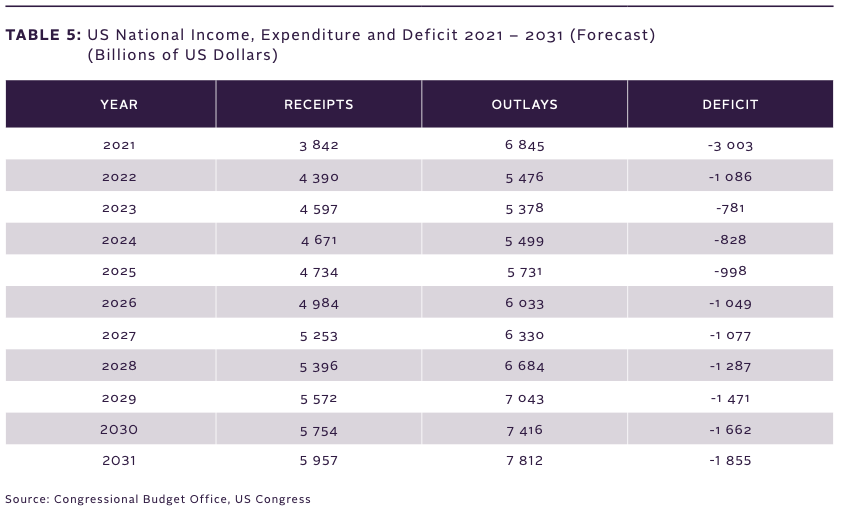 The United States of America enjoys a unique status in that it dominates the world, and its currency is the de facto reserve currency of the world. This means that it can run huge deficits and raise the shortfalls by selling government debt. But even in such circumstances something must pay the price. Of course, the price gets paid by the declining value of the Dollar, and it is this fact that causes us to hold our cash in gold for the long term.

Following almost a year of groundwork, led by our highly talented Financial and Marketing Director Clint O’Brien, SA Bullion has commenced a hedging (or overlay) programme with Absa Bank and specialist entities in that group. This programme enables the SA Bullion Group to dramatically lift its game and operate in the same space as leading international dealers. With the new capability of being able to go Long or Short utilizing SAFEX gold futures, SA Bullion is now able to do very large deals whilst managing price risk; the Group has no intentions of taking speculative (or ‘naked’) positions. Gold Futures are only used for risk management where we have one side of a big deal with a client (E.g. where we have acted as Principal and made a very large physical gold purchase and do not have the appetite to carry the price exposure).

In addition to gold price risk management, the firm has implemented the same structure for silver, and the timing is propitious. SA Bullion is presently working on a deal involving five tons of pure silver.

SA Bullion has essentially zero staff turnover, and the business has been incredibly fortunate with its staff appointments. One of these wonderful appointments has been Talieb Mohamed. Talieb has B.Com and B.Com (Honours) degrees in Finance, Investments and Insurance and was previously employed as a Forensic Analyst at Foschini Financial Services. In February we celebrated Talieb’s 10th anniversary with SA Bullion, and it is this backroom star who is now running SA Bullion’s treasury and hedging operations. We could not be luckier!

SA Bullion International has a May year-end and is currently in the audit process. The three South African companies in the SA Bullion Group have finalized their 2021 audits and have come through with unqualified audit opinions as you would expect of us. Notwithstanding the buffeting winds of the Covid pandemic, your gold investment manager, dealer and secondary market trader are in good health. I wish to add – we have tremendous sympathy and compassion for our clients and associates who have been terribly hurt by the pandemic and its effects.