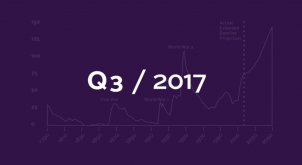 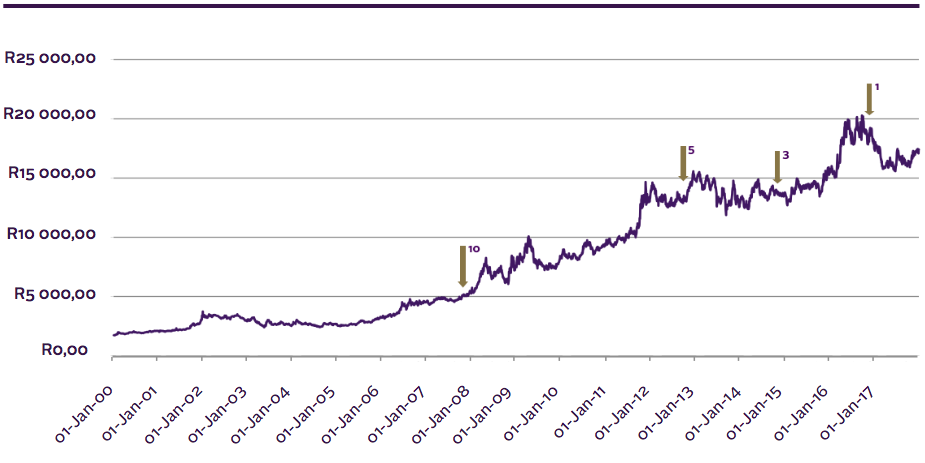 Beginning with gold priced in US Dollar:

Gold had a strong and fairly steadily-rising quarter. It lifted by $40 an ounce, or 3.2%. In the last three years gold has traded in a strongly-defined price channel. Prior to that gold had a monumental boom-and-bust in the heady days of Quantitative Easing and failing banks. The steep-sided and tall mountain on the price chart (see Figure 1) has its bases on the two sides around mid-2010 and mid-2013.

The five year performance figures make for grim reading as the starting point at 30 September 2012 was the high point before the huge washout of the Financial Crisis-inspired boom-and-bust in the gold price. Far more useful in getting a big picture perspective of the trajectory of the gold price are the longer term performance figures derived from the 10-year return (i.e. from 30 September 2007) and from the start of this century i.e. 31 December 1999. Over ten years gold has returned 5.6% per annum and this century (17¾ years) the compound annual return comes in at 8.7%. Without doubt these are highly credible returns compared to cash in the bank at around 2% per annum.

Moving on to gold priced in South African Rand:

Bumpiness in the Rand and in Dollar Gold is highly evident in the 1, 3 and 5 year measurement terms. Most instructional are the longer periods and here we look to 10-year compound annual returns of 13.0% and for this century of 13.7%. These figures trounce South African cash in the bank at around 7% per annum.

A Brief note on the United States and its Currency

By delinking the Dollar from gold, President Nixon removed the gold-backing restraint on money supply and freed the Federal Reserve to engage in more inflationary monetary policy than ever before. The effects on official price inflation figures (i.e. the flip side of Dollar depreciation) are readily apparent from this chart from the end of World War II to the present:

Chart: Consumer Price Index for All Urban Consumers: All Items 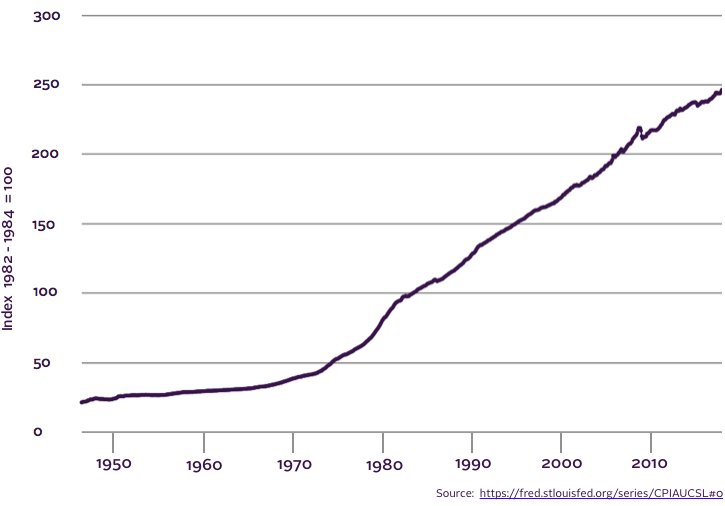 Today, US inflation (CPI-U) continues to go forward at around 2% per annum whilst economic growth continues to stagger and lurch at around the same level, at best.

For those who wish to read just one sentence on this matter: Faltering economic activity and political discord amplified by an impetuous president continue to imperil the Dollar and intensify risks in markets that are vulnerable to turmoil.

President Trump has been singularly unsuccessful in passing legislative reform. In fact in this easiest honeymoon period of a presidency (and with a Republican Party-controlled Congress) he has not managed to pass a single piece of transformative legislation. But notwithstanding his lack of success, he could be successful in passing tax reform legislation with the effect of slashing tax rates, particularly for the rich (and eliminating estate taxes for the rich). If he should succeed in this area, he could provide meaningful stimulus to parts of the economy that would be good for corporations, stock markets and the rich. On the negative side of the ledger the US Public Debt would balloon as tax revenues shrink, and the US Dollar would pay a nasty price. This would be very good for gold, but as usual the middle class and the poor would be left behind as Trickle-Down economics does not work in reality.

Cryptocurrencies in general and Bitcoin in particular, have been the in-vogue topics of conversation this year and have caused us to be on the receiving end of many related questions. It stands to reason that we would be asked our opinion of Bitcoin, after all we are in the business of “gold as a competitor to cash in the bank”.

But not so fast.

Bitcoin requires full faith in the Bitcoin market. And with nothing behind it, aside from many individuals with criminal backgrounds, this is a big ask.

Bitcoin has multiplied 879,999 times. Ethereum (the number 2 cryptocurrency), is up 5,400% in the last six months. These increases in price do not reflect behavior of currencies. These performances are reflective of speculations gone mad. As the esteemed Jeffrey Christian has recently put it: “Bitcoin is a pet rock”.

For those unfamiliar with Gary Dahl’s invention – in 1975 this advertising executive packaged rocks that were then sold as ‘pets’. The fad caught on and in six months Dahl sold 1.5 million pet rocks to a fad-obsessed public. The following year pet rocks were out of vogue and were consigned to the scrap heap of fickle humanity’s playthings.

Again, to quote Christian: “Bitcoin is a scandal waiting to happen. It is divorced from fundamental realities.” We are convinced that someday the gullible public will wake up to the fact that the Emperor has no clothes. Everyone ought to know what happens to fads that go through the roof. If Bitcoin should continue to find buyers at stratospheric levels and maintain these, then it would be the first of thousands of such fads in human history to achieve this. In our opinion the rich speculators who were the bulk of the early ‘investors’ into Bitcoin and the other cryptocurrencies, will offload to the average-joe punter who will then lose his socks – as it usually works.

Bitcoin and the other cryptocurrencies could not be further from our position on currencies. They are a fiction. We stand for fundamental realities and logic. We understand that red 22 on the roulette wheel will make some gamblers rich. But we still don’t like betting and we don’t like the thought of having to find bigger fools than ourselves to whom we would have to offload our Bitcoins so as to make a profit.

It has been six months since we last brought you some news about our business. In the interim we have passed through another grueling audit cycle where once again we have come through with an unblemished audit report from Grant Thornton. This was no surprise to us at SA Bullion but is always worth mentioning as we understand the importance of ‘corporate health and hygiene’ where one is in the ‘trust’ business. This latest report is unblemished report no.12 for us.

Lastly, I would like to end on a very happy and uplifting note. Our SA Bullion family has grown! SA Bullion director, and my great friend, Clint O’Brien, became married to Miranda Dols in a dream wedding in Tuscany, Italy in August. We congratulate the newlyweds and wish them many decades of marital happiness!