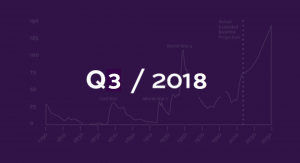 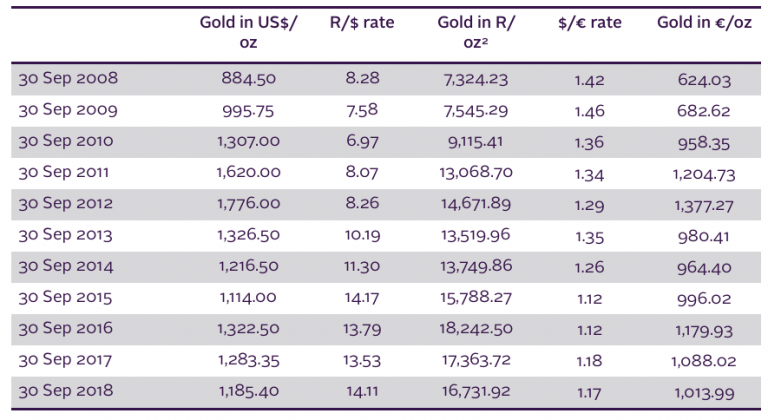 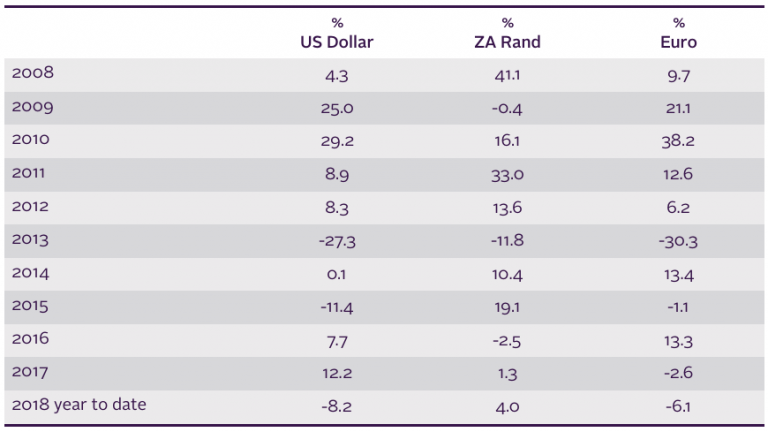 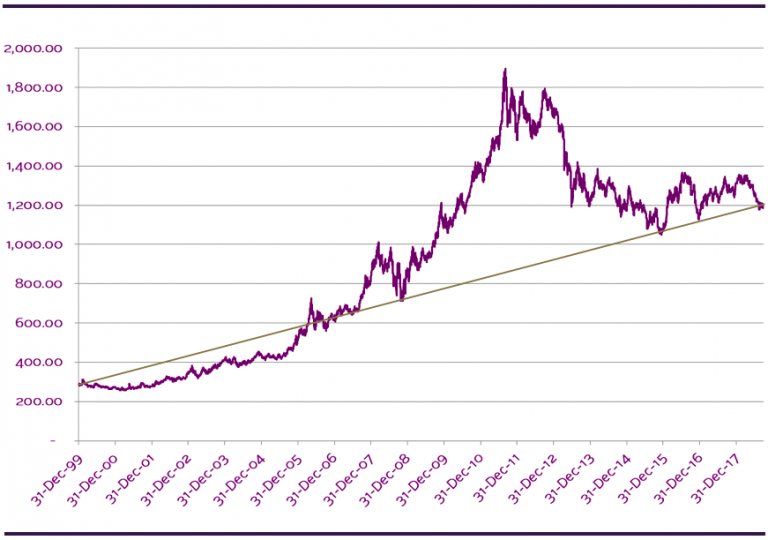 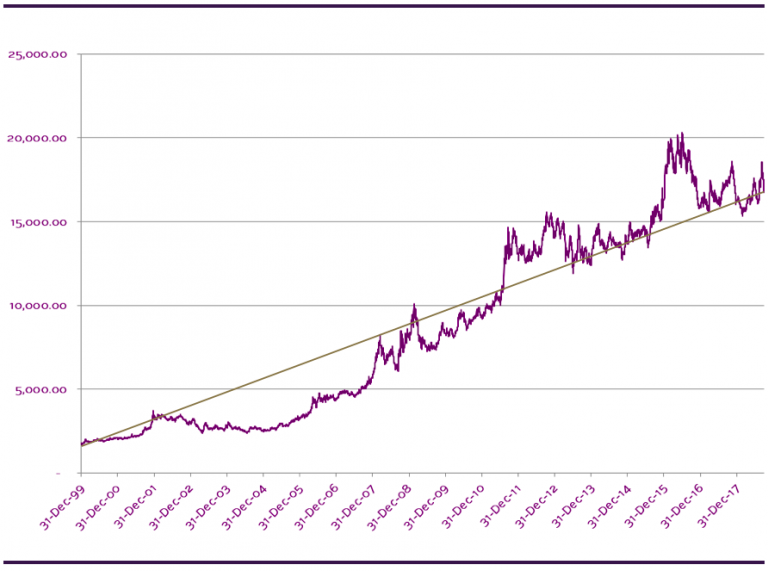 Following a very strong second quarter in Rand, gold had a poor quarter in every currency. The last one-year returns have been poor. Over 10 years gold has strongly outperformed cash, and since the turn of the century gold as an investment has been excellent.

The United States, its financial markets, and its currency are on the cusp of change. The wagon with its pioneers on board has crested the front range, but what lies ahead are not plains.

In our Second Quarter 2009 report we wrote that the US must “inflate or die” and that “reflation” must continue unabated. For nearly 10 years that has been the case. That is all about to change.

One of the world’s largest investment banks, Lehman Brothers, collapsed in late 2008. This was the final straw that broke the camel’s back, and precipitated the abrupt ending of the previous up cycle. In the 10 years following, we have witnessed most of the completion of the next cycle.

The classic Debt Deflation Cycle is distinguishable for its stages – as we have extensively analysed in past reports. The current 10-year cycle that we are in has been an excellent model of the classic cycle. Consider the following: 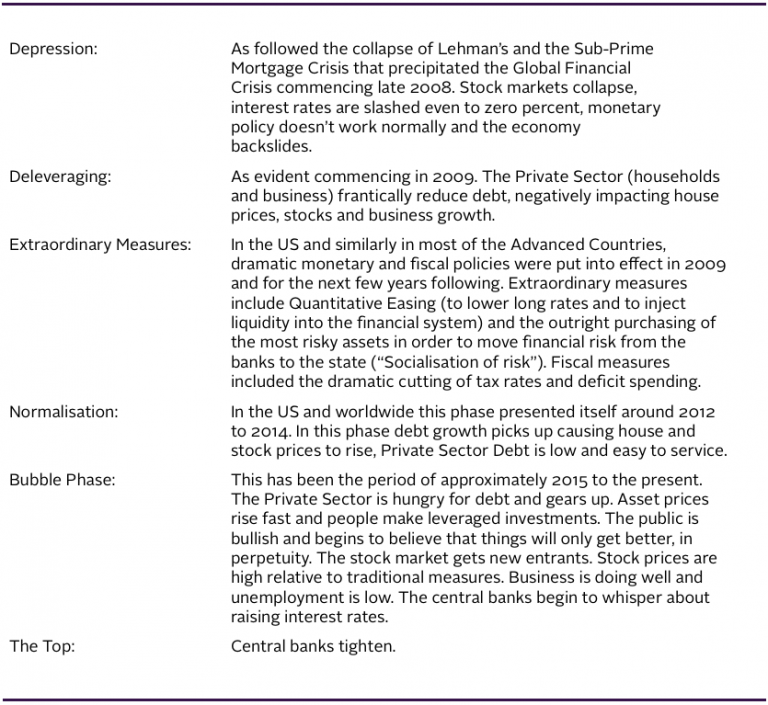 Reflation is a package of coordinated stimulus efforts conducted by a government with the objective of lifting an economy back to its long term trend level following a dip. These stimulus efforts are largely monetary or fiscal in nature.

Fiscal stimulus flows from Government via the Legislative and Executive Branches, i.e. Congress and the President, by way of amended tax laws that reduce taxation and thereby leaving more money in the hands of the private sector; and by way of Deficit Spending, which causes an expansion of the National Debt.

Has there been reflation and if so, has it worked?

Definitely. The actions of the Federal Reserve and the fiscal authorities have raised stock markets, lifted the US economy and improved employment conditions. We explained the Wealth Effect and its transmission process in our Fourth Quarter 2012 report. Slowly but surely the process worked, where rising asset prices eventually translated into business spending and employment. Note the following:

A Brief Note on Liquidity

The Bank for International Settlements (or “BIS”) is in effect the central bank of central banks. Its concern is the monetary and financial stability of the world.

The BIS says: “Unusually rapid changes in outstanding credit are associated with the build-up of vulnerabilities, with potential implications for financial stability”. History convinces us of this point, and holding the views that we do, we felt this point is worth emphasizing here.

Liquidity and the State of Play

It is important to know that the Fed and other central banks only control interest rates at the short end. They do not control long term interest rates. That control resides with the markets i.e. the collective actions and views of all participants. These points are true – except in exceptional circumstances.

We are in an era that is similar to that of the late 1930s. Only in the late 1930s and in the current time have interest rates gone to zero percent and still been ineffective, resulting in the deployment of some other extraordinary monetary policy. The other policy has been Quantitative Easing, or “QE”. This policy has entailed the purchasing of financial assets by the Fed and other central banks. The objective has been to buy these assets by overpaying for them, thereby driving down yields and in so doing manipulate long term rates downwards.

In order to carry out their QE intentions, the major central banks – the Fed, the European Central Bank (“ECB”) and the Bank of Japan (“BoJ”) have bought assets around the world to a value of approximately $15 trillion. In 2017 alone, the big central banks injected $1.5 trillion into the financial system by way of QE.

In recent times short term rates have been controlled by the Fed, and long term rates have been controlled by the ECB and BoJ. In 2015 the Fed ended its QE3 programme leaving the setting of long term interest rates to the ECB and BoJ who have continued with their QE programmes. That however is about to change. The ECB is scheduled to end its QE programme altogether in 2019.

In 2018 to date, the big central banks have conducted QE to the extent of approximately $125 billion – down 90% on 2017. Additionally, the Fed is shrinking its balance sheet by “rolling off”, where it allows securities to mature and cease to be. Global liquidity is shrinking fast and tightening is becoming the new flavor in town. Already the effect has been seen in short rates that have almost doubled, from around 1% to around 2% and long rates have risen in a year from around 2.2% to around 3.2%. See charts. 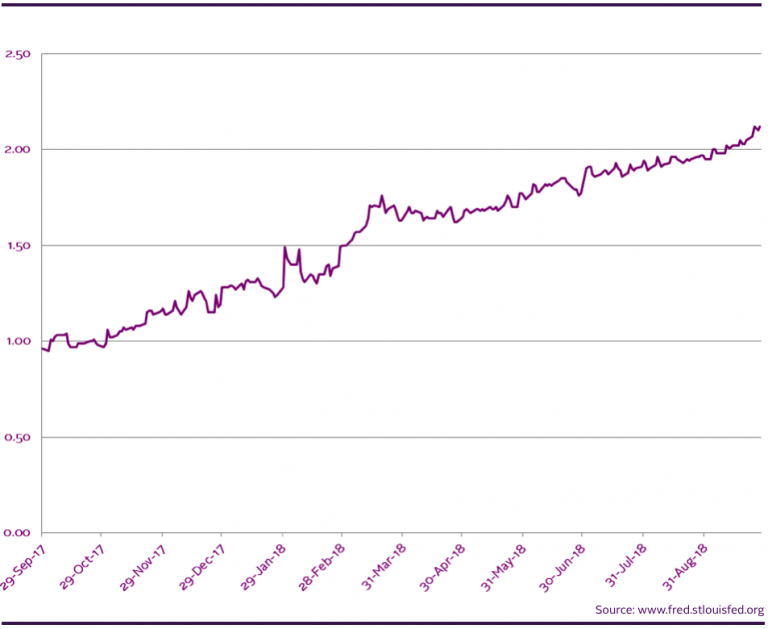 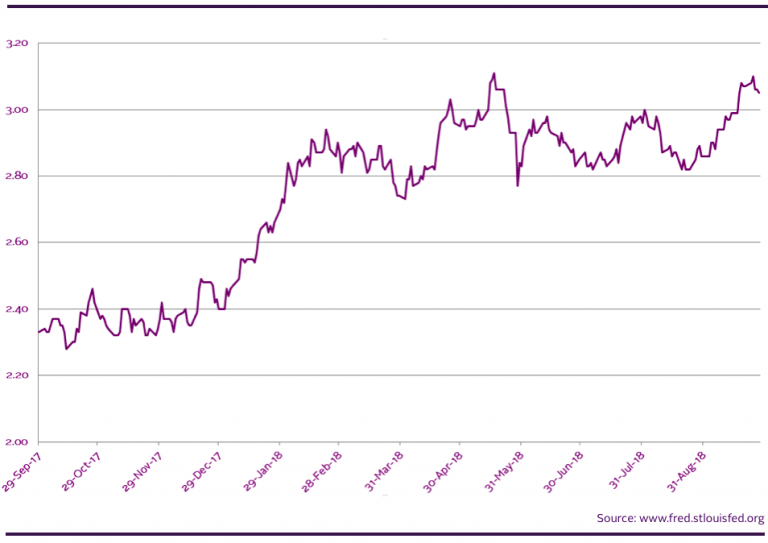 Tightening liquidity spells very bad news for global asset markets. The quickest winners due to QE have become the quickest losers due to tightening. Treasuries have reacted fast. Yields have risen quickly and the securities have lost value. QE drove performance in corporate bonds and emerging market debt. The reverse is now playing out. This is classic Mean Reversion.

Higher US interest rates have translated into a stronger Dollar, and together these have roiled developing markets. Investors have worried about the ability of Developing Nations to service their Dollar-denominated debt, and as a result, have re-priced securities and currencies of certain, more vulnerable Developing Nations. A quick review of risk ratings of the most vulnerable countries as formulated by Fitch will confirm suspicions due to recent currency movements:

We are nearing the end of the current cycle and all asset prices (stocks, bonds, properties) are very vulnerable;

Emerging Market currencies (including Rand) are very vulnerable to a rising US Dollar.

We are delighted to announce that we have developed an online portal for you, our customer, whether you be an Investor or Financial Advisor. This portal enables you to login via our secure website to get a live view of your investments with us. Up to date gold holdings, cash in bank, transactions, and more, are all available with a few clicks.

You will shortly receive an email from us indicating the process to be followed for logging in, and your unique login credentials that ensure the confidentiality of your business with us.

This project has been difficult, costly and onerous. My thanks go to our IT services company Silicon Overdrive, who have been tremendous, and to our very own Operations Director, Imran O’Brien, who has been titanic in his leadership of this project.

For 12 years SA Bullion has offered a custody service for gold bullion holdings. In support of this service, the company conducts dealing on behalf of clients on both ends – i.e. buying and selling.

It has long been an aspiration of the firm to broaden its scope as a purveyor of gold, to include a retail offering. In this space the firm would simply be a retailer, selling gold to customers and buying gold from the public. We are pleased to announce that we have entered into an agreement with Rand Refinery Limited and have been operational in this new line of business for two months. In this time we have done more than R30 million of new business!