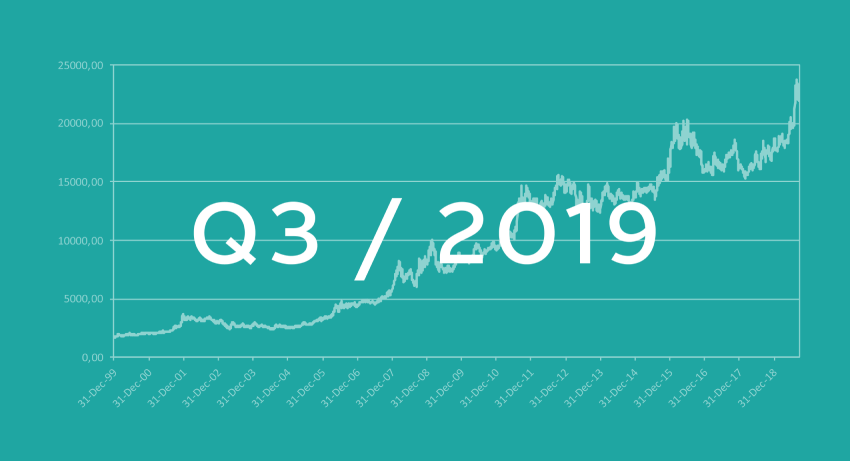 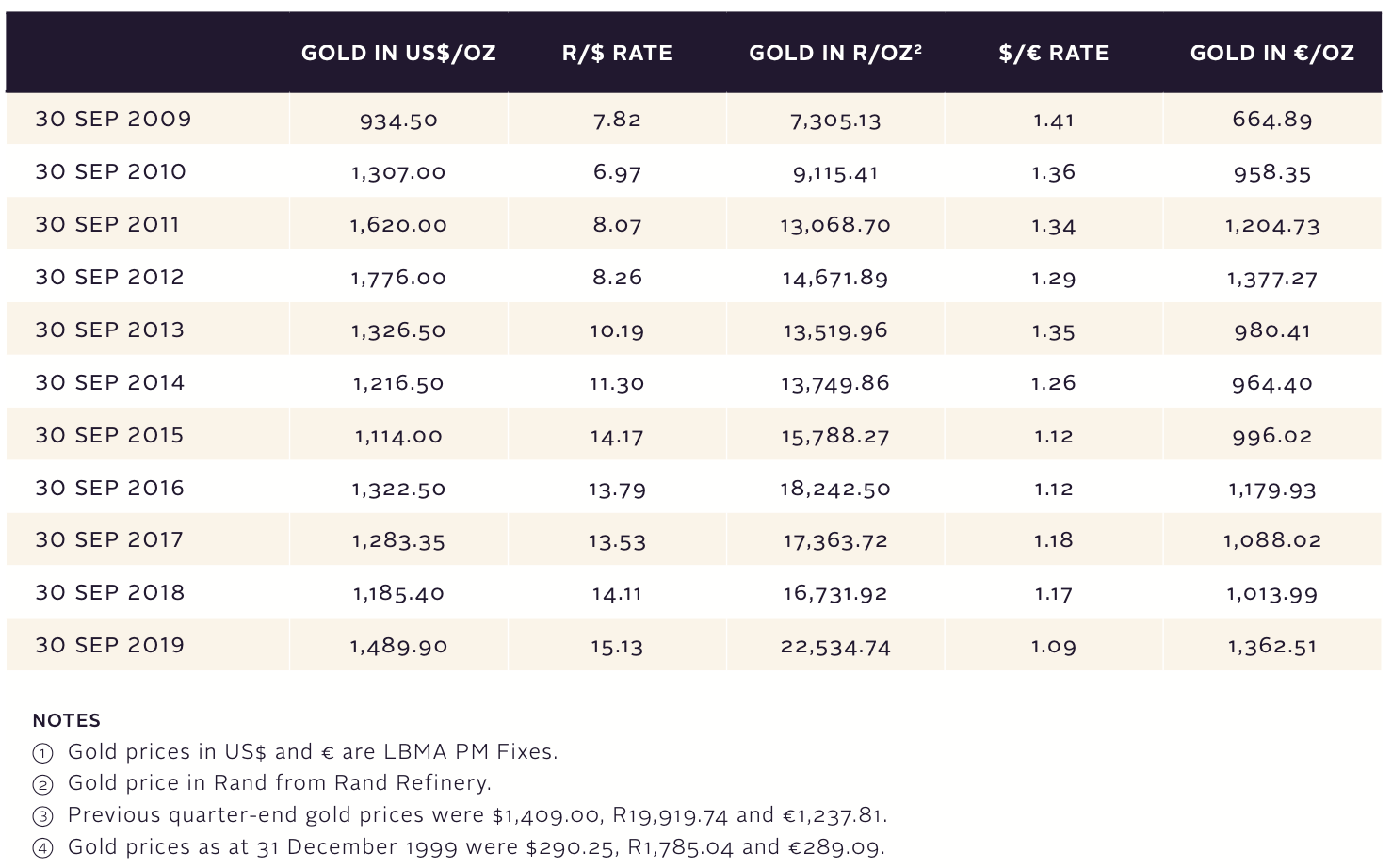 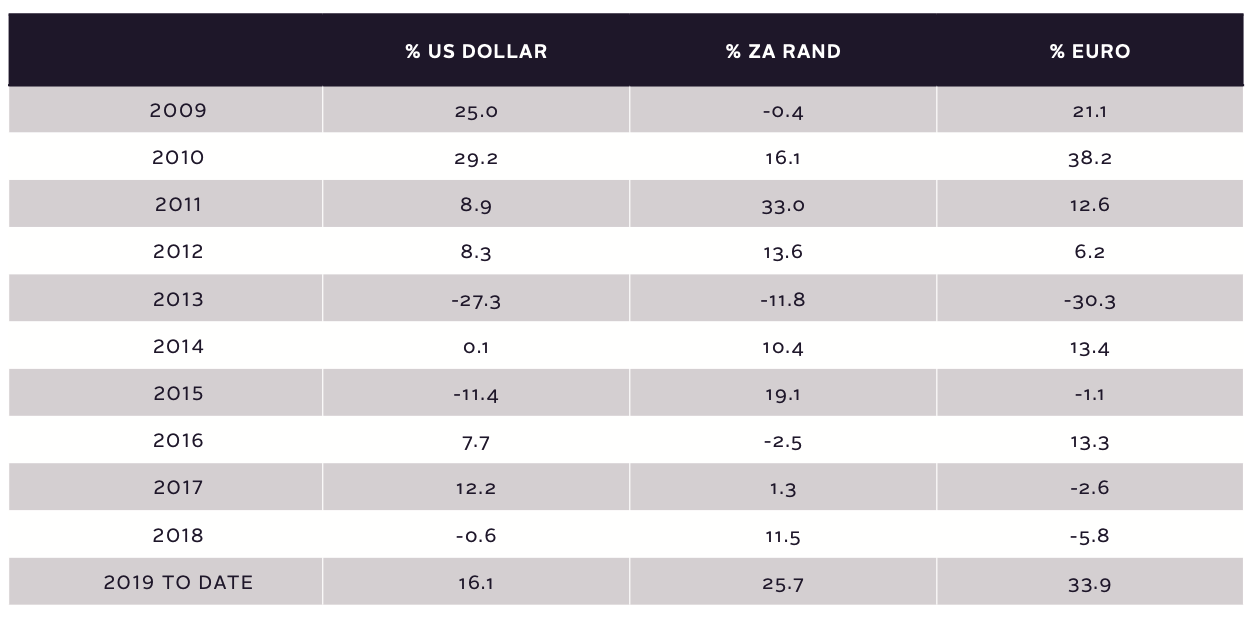 Gold had a very good quarter in Dollar, an excellent quarter in Euro, and an outstanding quarter in Rand.

Gold had an exceptional 12 months to 30 September returning over 25% in US Dollar and over 34% in Rand. These are truly remarkable returns for a tangible hard currency.

Gold performance since the turn of this century, i.e. 31 December 1999, has been excellent. In US Dollar gold has compounded over these 193⁄4 years at an annualized rate of 8.6%, and in Rand gold has compounded at an annualized rate of 13.4%. These numbers represent not just great security of capital, and additionally, not just great preservation of capital in real terms, but also great investment performance.

Our story continues to be demonstrably true and our clients and advisors continue to be proven correct in their capital allocation decision. The grinding descent of fiat currencies since their advent in 1971, and the inexorable ascent of the one hard currency, have a long future.

A Quick Word On The US And The Dollar

Long term readers of this quarterly report will know that we have a great interest in US politics. This top-level interest cascades into legislation, and then policy, and ultimately into issues of policy implementation and finances. The money aspect concerns US Federal income and expenditure and how that impacts the value of the Dollar.

By understanding the Dollar one can understand its opposite – gold.

The US political arena has been interesting to say the least. A deeply-flawed man won the presidency in 2016 and with little regard for state finances, has plunged the country into the greatest level of indebtedness in the history of humankind. He has also maneuvered affairs such that the Federal Reserve has the least ammunition in a period of prosperity for the protection of the Dollar. The once-great nation of America has become almost unrecognizable in three short years – financially-speaking. The President has done untold damage to the institutions that hold the country together so as to achieve his own personal objectives: vanity, power, money and then finally….avoidance of prosecution. He has done immense damage to people around him. Many have been convicted of crimes and some have gone to prison. But then they should have known: “you sleep with dogs and you get fleas”.

In Dollar terms gold has been performing extremely well largely due to the actions of the current US President (because he has been doing so much damage to national finances and the Dollar). Should he lose the election next year gold will do well because the state of US finances is parlous and there are no good remedies in sight. Should he win re-election, gold is likely to do extremely well as he is likely to wreak havoc by actions such as cutting taxes for the super-rich (again). There is a caveat however. If he manages to end healthcare for the 35 million poorest Americans, as he wishes to do, then he will save the state a lot of money and state finances will benefit.

Having managed to elude the Mueller investigation, the President is unlikely to dodge a bullet a second time. It is likely that the US Congress will impeach the President before this year is out, but whether or not he becomes the first US President to get removed from office… well, that’s another matter, but the likelihood is rising by the day. Lots of drama, but not much policy.

South Africa And The Rand

In May 2009 a deeply-flawed man became President of the Republic of South Africa. With little regard for state finances, the President plunged the country into a state of desperate indebtedness. He also broke the institutions that hold the country together so as to achieve his own personal objectives: vanity, power, money and then finally…avoidance of prosecution. He surrounded himself with bad people and he corrupted many who were good people. “You sleep with dogs…”

The 9 years of the Zuma presidency constitute the major portion of the 14-year lifespan of SA Bullion. On Christmas Day 2004 I made the decision to establish SA Bullion. The complicated Thabo Mbeki was President and the compromised Zuma was his deputy – waiting his turn to become President of the Republic of South Africa. Zuma was already causing ructions for the country. Financial crime allegations and sexual crime allegations swirled about. It took R5.65 to buy $1.00.

Zuma could have overseen a glorious rising-up for South Africa and her largely poor population. Instead his personal ambitions of vanity, power, money and finally, avoidance of prosecution, ensured a broken state and a deeply-damaged population. The importance of personal character is just not sufficiently appreciated by the voting public (or some political parties) when it comes to making election and leadership choices.

This is a Third Quarter Report i.e. for the calendar quarter ending 30 September. Our first was in 2005, corresponding with the rag-tag ascendancy of Jacob Zuma. For no better reason that this, let’s take a look at the Rand: Dollar exchange rate since 30 September 2005.

Table 3: Rand:Dollar Exchange Rate as at 30 September each year 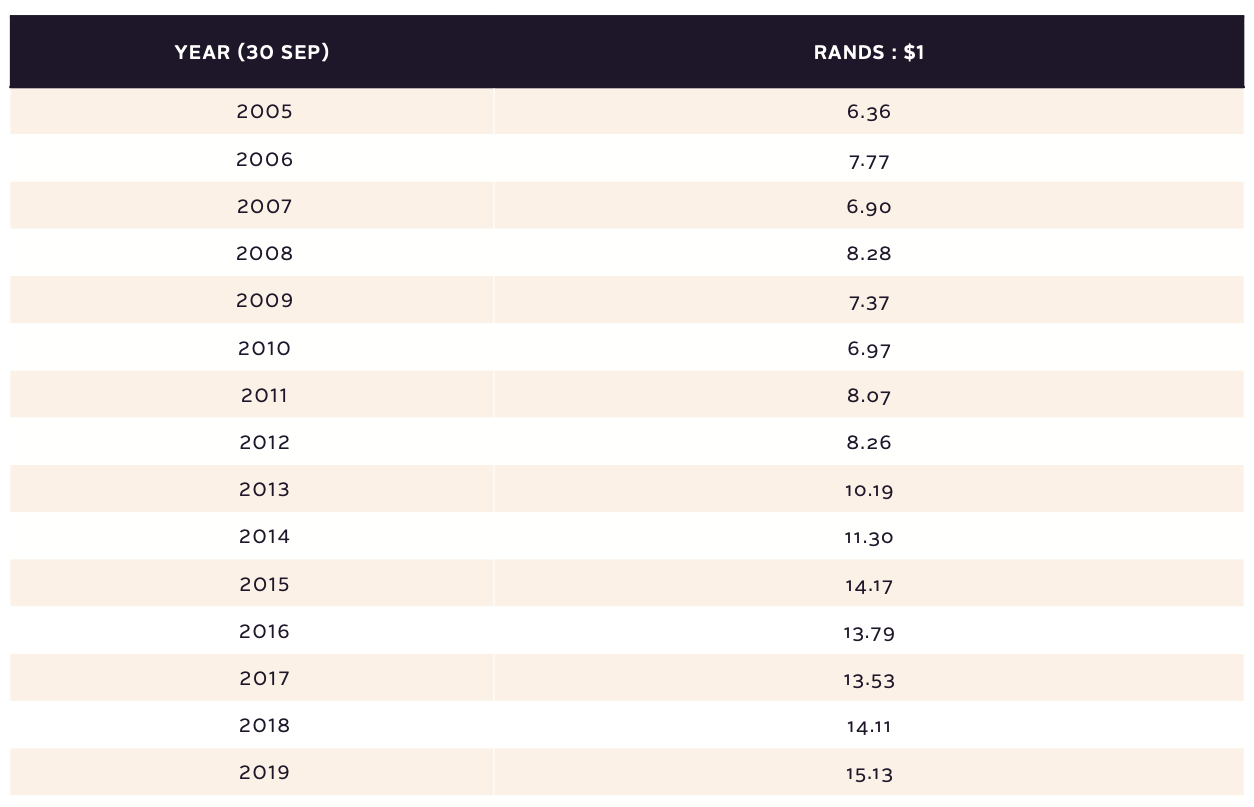 In the 14 years as represented in the table above (and essentially representing the lifespan of SA Bullion that was incorporated on 18 May 2005), the Rand has lost 58% of its value against the US Dollar. This equates to an annualized rate of -6% per annum. This dreadful state of affairs has hurt many millions of people who held their savings as cash in the bank.

What Has Caused This Wretched Zuma Spiral Of The Rand?

There are many, many reasons attributable to the fall in the Rand over these 14 years and not every one can be laid at the feet of Zuma. However, the main reasons can be attributed to that man and they would include:

What Are The Indicators Of Rand Damage?

Again, there are many, many indicators, but the main indicators of Rand damage are: 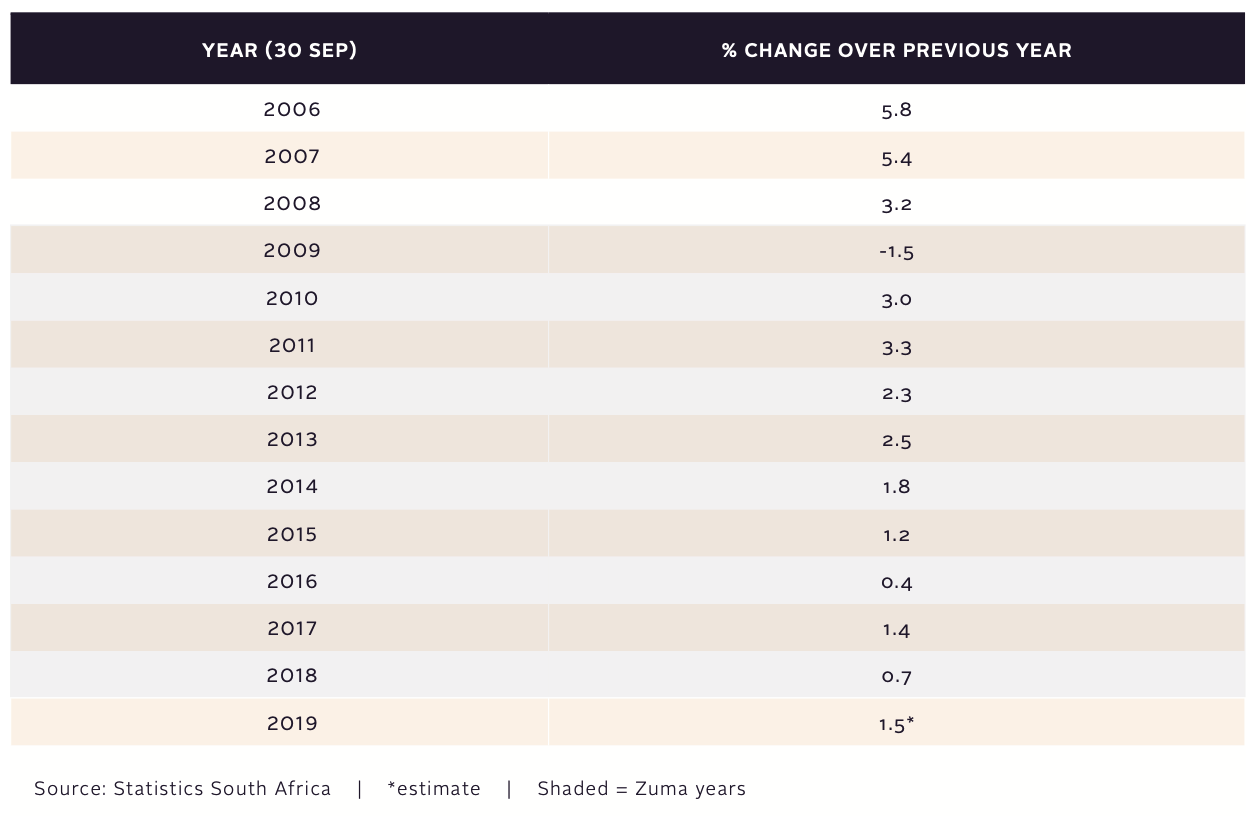 From the table above it is apparent that South Africa has left its high-growth period twelve and more years behind, and that the economy is moribund in the face of a rapidly expanding population. For this same reason the South African unemployment rate has risen from 24.7% in 2005 to 29.0% in 2019.

National Debt in 2005 was at a manageable level and South Africa was rated as a financially prudent country. This situation changed dramatically over the following years as President Zuma and his acolytes inflicted untold damage on the engine of the economy, stole/misappropriated/plundered state coffers, and borrowed into ruination. Witness the rise in National Debt as a proportion of GDP: 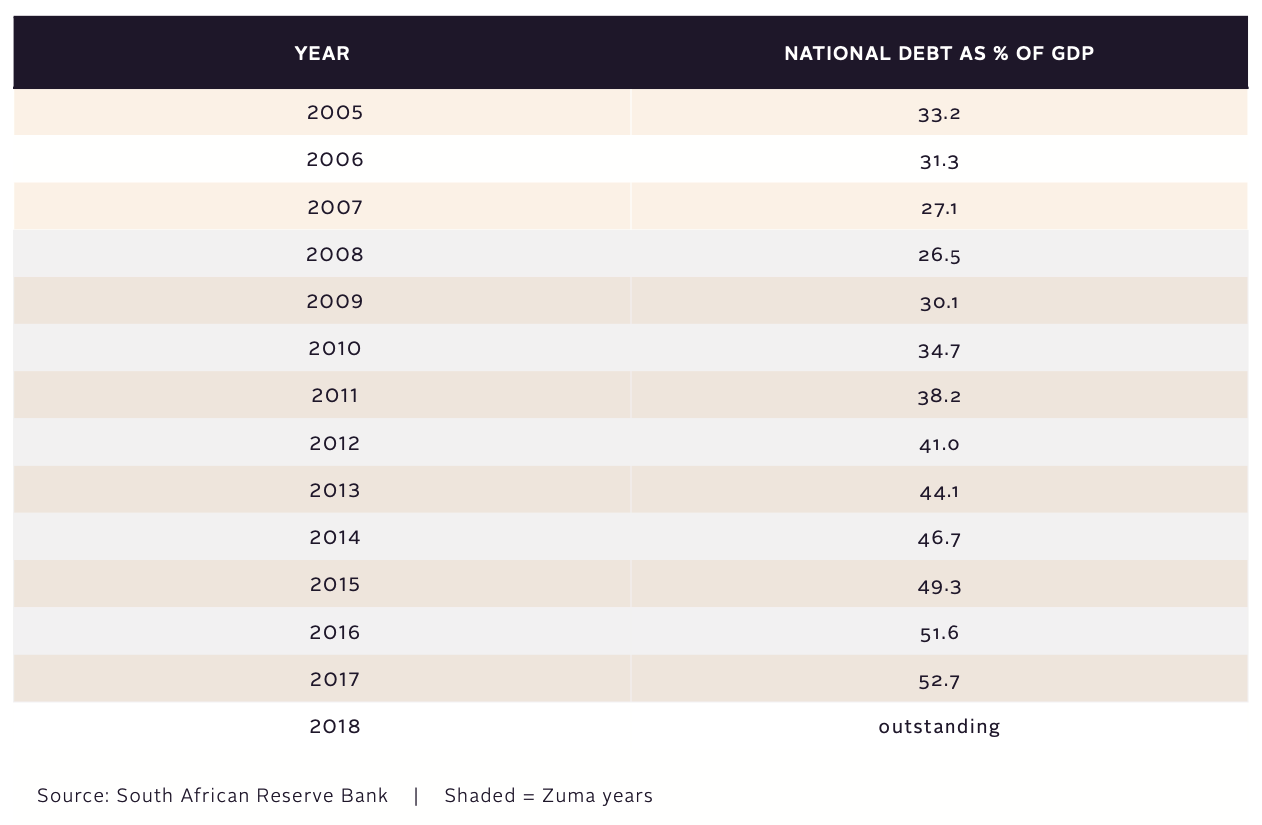 The level of National Debt is approaching the level at which the country enters into a Classic Debt Trap. In such a circumstance the nation has no possibility of paying down debt and has insufficient means to service the debt. The country has to borrow to pay the interest bill. At this point the country goes on bended knee to the IMF (and confronts all the tough discipline that goes with that), or follows the route of Zimbabwe (and all the horrors that goes with that).

Unfortunately the South African National Debt story is a whole lot worse than portrayed above, and is encapsulated in one word – Eskom. More about that horror show later.

The single best means to gain an understanding of the overall condition of South Africa and its trajectory is by studying its credit ratings.

Credit ratings are used to ‘rate’ a borrower’s ability to repay interest and capital on loans. The ratings are extremely important as they affect the interest rate at which government will be able to make future borrowings. They also affect the decisions of lenders as to whether or not they will invest in the sovereign debt of the country. 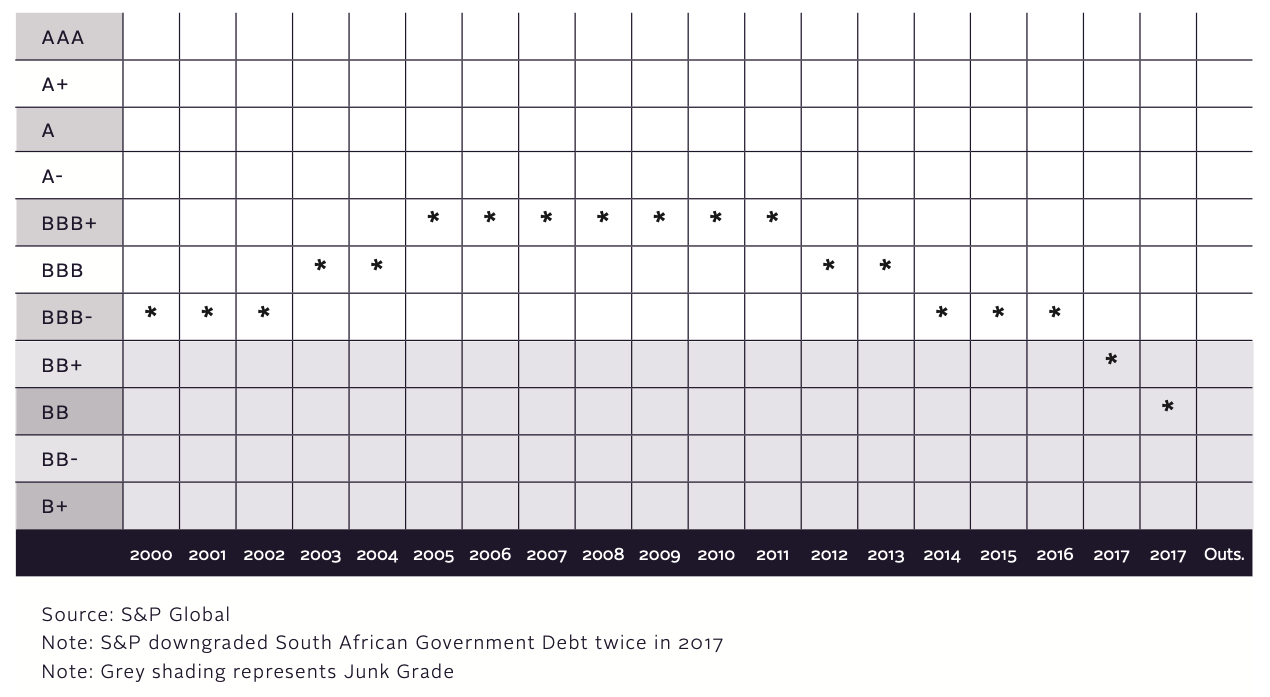 In a recent review Moody’s observed the following about South Africa:

Unfortunately we must concur with this assessment. But even more unfortunately, we would add that the biggest risk to South Africa and the Rand today is Eskom. Every citizen knows, from personal experience of loadshedding, that the power utility is not coping. Perhaps what every citizen does not know however, is that Eskom has racked-up half a trillion Rand in debt and is going ever deeper into debt at a truly staggering rate. The utility is like a sieve, leaking cash to theft and corruption through countless holes. Furthermore it is legally compelled to deliver electricity even though a vast proportion of its customers simply refuse to pay for their consumption. But most importantly, if the utility fails to service its debt, various debt covenants kick in and the government becomes liable. South African National Debt in truth therefore, is in a far worse state that is apparent on the face of it.

If we had to add one last item, it would again be a hugely negative one. And that is the emigration of skills and capital. It is what comes to a highly corrupt country teetering on the brink.

The following are our Best Case predictions of future Rand: Dollar exchange rates:

All of the above is terribly negative about South Africa and the Rand, but one must be realistic about the conditions and make the appropriate investments for the circumstances ahead. We can offer one piece of salvation in this rapidly deteriorating mess – own gold. Don’t delay. The big risks are all one-way.

In 2005 we commenced with our gold investment proposition which we call The BullionGold Facility. The client’s facility consists of gold in the vault plus a bank account. We later introduced a Halaal facility for our Muslim customers which we call The HasanaGold Facility. The client’s facility strips out interest earned and donates this to the humanitarian organization Gift of the Givers.

Last year, in early 2018, we commenced with our retail business that sells Krugerrands to the public with directly delivery (minimum order 10 Krugerrands) and buys from the public (no minimum).

This year, in 2019, we commenced with our international operations, as announced to you in the previous quarterly report. We conducted a ‘soft launch’ to our longstanding customers and financial advisors and I am delighted to announce that we have had lift-off! We now hold custody for clients’ gold in both of our international vaulting facilities – Zurich and Dubai. Although Krugerrands are an option available to our clients, Minted Bars make more sense and it is these gold products that now sit in our vaults. (Note: Minted Bars do not make sense in South Africa as they get levied with VAT).

On the international front in addition to providing gold custody, we also offer outright gold sales. We deliver to virtually every city on the planet and our first has been to Hong Kong.

We are very excited about our new international offering from several perspectives. We have produced a brochure for this offering and you should find the electronic version sent to you along with this report. We are in the process of producing hardcopy brochures as well and would be pleased to send a copy to you if you should so request.